SHARE Anarchy In The Uk: Gittin Ready For Gymkhana

Ken Block brought his Gymkhana extravaganza over to Europe in 2012, with a series of qualifying heats during the Autumn building up to the grand finale held in the UK, featuring a race against Ken and €5,000 on the table as the prize. Special guest Vaughn Gittin Jr joined him with an RTR Mustang to show just what howling American V8s could do: which was shock and awe for the assembled crowd. Following their stint at Top Gear Live, the next day Friday Ken and Vaughn headed over to Santa Pod for a press event to launch the 2013 European Rallycross Championship. Monster Energy are stepping up to sponsor the series, which should take the ERC to the next level.

I caught up with the drivers again on Saturday, to watch the demonstration runs and to catch some of the evening show.

The main event would be on the Sunday: the showdown between the finalists that had made it through the European regional heats.

Gymkhana was part of the final big event of the year at Santa Pod: the Flame And Thunder show. It’s a riot of monster trucks, stunt driving, dragsters – and yet more fire.

There was an appropriately high level of Americana on show, from this line-up of TV and film-related cars…

…to the many beautiful Camaros and Mustangs dotted about.

Then again, how about a Morris Traveller – dragster style?

Or the world’s fastest Fiat 126, with a Chevy V8 somehow shoehorned in?

On my final approach to Santa Pod there had been on/off rain showers, which turned into a full biblical deluge of hail just as I arrived at the main gate! That left the Gymkhana arena a treacherous, waterlogged place to be…

…but overlooked by an enthusiastic crowd of guests no doubt amped up on product, raring to see the drivers get out there.

Unleashing the combination of an enormous drift truck and Santa Pod’s resident jet-powered track blowers at least got rid of the majority of puddles and the action could continue.

With the weather schizophrenic, the fast food outlets did a roaring trade keeping people warm, making fans an offer they couldn’t refuse. Something about sleeping with the fishes?

Despite the chill Ken and Vaughn were on great form, and ready to entertain the big crowd that lined the fences.

A long snake of fans queued up to get merch signed by Ken, Vaughn and the other three special guest drivers along for the weekend – Liam Doran, Paul ‘Smokey’ Smith and Buttsy Butler – who would all be putting in runs around the Gymkhana course during the day.

To kick off the evening, stunt-man extraordinaire Terry Grant put in another gravity-defying performance, filming with a spectator’s cameraphone whilst hanging from the side of his Legends car one minute…

…and then jumping into his exhaust-popping, fire-breathing Evo or Nissan 350 for some double-donutting madness.

Buttsy Butler and Paul ‘Smokey’ Smith were next out to entertain the fans, lighting up the gloom with brake lights reflecting in the copious smoke they produced.

Though the smoke that the Nissans could generate in the damp was nothing compared to the 1,000hp, 6,000kg drift truck that annihilated the arena!

As the fireworks kept popping, Liam Doran took his DS3 out for a spin as the final warm-up to the evening’s grand finale: Vaughn versus Ken.

Vaughn was set up in an awning alongside Liams’ DS3 rallycross Supercar: as soon as the Mustang fired up it was like an unholy thunderstorm had hit Santa Pod.

As Ken warmed up his Fiesta around the course, Vaughn lit up the rears on the starting line with the fireworks popping around him and joined Ken out on course.

A combination of smoke from the tyres and water from the puddles shot up as the two battled out on the slippery course.

The fireworks over the track were matched by those on the track! With a final flourish the two came to a halt by the catch-fencing…

…which was the cue for an almighty fireworks display to explode behind the pair, bringing the evening’s entertainment to a close.

That didn’t mean the drivers disappeared: both brought their cars back in front of the main crowd in the Monster stand for pictures and interviews.

With some appropriately spooky UV lighting, Ken and Vaughn finished off their on-track duties before heading to the stand for the evening’s just-starting party.

Though back under the awning, Vaughn and Ian Stewart would first discuss tuning the set-up: this might have been a demonstration, but honour was still at stake!

Sunday morning dawned brighter than expected: the forecast rain was somehow skirting round the horizon of Santa Pod so it looked like we’d be in for a dry day of action.

The RTR was looking pristine and ready to rock.

As the mechanics prepped the cars I had the chance to join Dean for a quick poke around the shipping container for Vaughn’s RTR: it’s a real home from home for the team, a pre-packed workshop and transporter all in one.

It’s quite something: the entire container is tightly packed with storage lockers and mounts for spare parts (tyres, suspension), a small crane for working on the engine and has its own generator to provide power and light.

During the mid-morning all the drivers put in another run, both to get their eyes in to the dry, cold Sunday morning conditions and as part of the general entertainment.

…with the Citroën Supercar coming out top in a suitably smoky showdown.

After the morning runs Vaughn and Ian decided on a ratio change for the RTR, to give the Mustang more punch on the short acceleration runs between obstacles out on the course.

There were three diagonal sprints across the arena, and even on a course where you expect to be done in around 41 seconds a small ratio change was predicted to deliver about 8/10ths of a second.

The RTR has a quick-change gearbox, where the ratios can be removed and new ones slotted in within minutes: it’s an impressive procedure, and one that has upped the game in Formula D. Vaughn’s crew are able to make battle-winning changes even between runs.

While Dean and Ian got on with the set-up changes, Vaughn took a walk up to the far end of the arena to check out the competition: specifically the two Falken Tyres BMWs.

Remmo Niezen and Lars Verbraeken were likely to provide the stiffest competition in RWD, and so it proved.

There was a slight change to the schedule, with the main AWD demonstration run brought well forward. Ken and Liam would run against each other early, as both would have to dive out to catch planes to make the final round of the Global Rallycross series at SEMA.

Liam and Ken put in awesome runs, leaving the arena looking like a battlefield at the end of it.

For Ken there was just time to hand over the AWD top prize to Dimirij Sribnyj – helped by a liberal sprinkling of Monster girls – and then he and Liam hot-footed it out of Santa Pod and off to the airport.

The battles moved on to the rear-wheel drivers: Remmo’s 465bhp, 5-litre BMW E30 M5 V8 would come out top in the RWD class runs…

…though Britain’s Luke Woodham put in a great show during his heat and finished second overall.

Vaughn stood at the fence during the competitor runs, sizing up his competition…

…before heading back to the awning for some final checks with Dean and Ian.

With the V8 thundering on tick-over it was time to get in and head on out.

There was time for just a quick warm-up, then it was time to put everything on the line.

Remmo and Vaughn sat below us, engines on the limiter, waiting for the starter signal…

…but it was Remmo who won it by a fraction, despite both putting in inch-perfect drives, turning on a dime around every barrel and tackling the course in virtual symmetry.

Just 0.02 seconds separated them in the first heat, and barely more in the decider.

Everyone was enthralled with the battle, and even Vaughn didn’t seem too disappointed to have been beaten.

Though of course, being the competitors they are Vaughn and Ian had an immediate debrief about how the runs had gone…

So that was the inaugural round of the Gymkhana Grid and the battle for the European Gauntlet: despite some challenging conditions it went down fantastically well.

Vaughn seemed to love his first competition visit to the UK – and I hope we’ll see him back again next year! 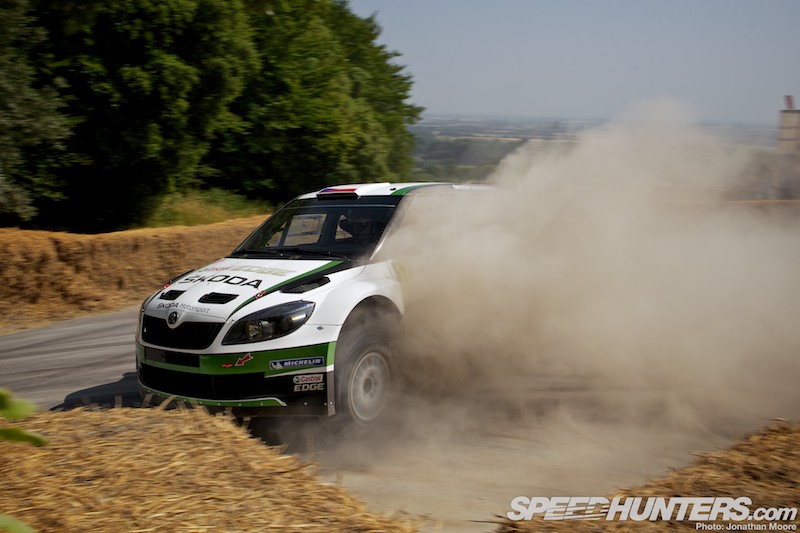 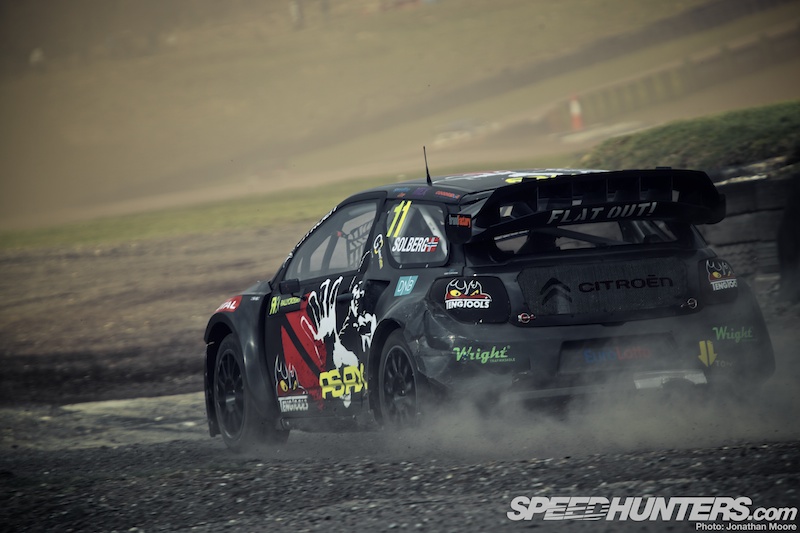 Looks like a cool event.
How does monster stay in business?  I think they are horrible, taste like  paracetamol in fruit juice.

i'm not a medical doctor but this is absolutely nothing like the last gymkhana i watched. does ken think the whole world revolves around him and he can just change words, or is this sort of like how, six years ago a "tablet" was a little device for digital drawing and painting, and now a "tablet" is an enormous smart phone that can't make calls, even though the real tablets still exist?

also lol gittin ready, i just got that

Mr Moore, a lot of the captions for the pictures where Vaughn Gittin Jr. are talking with Ian Stewart say KEN and Ian.

Good article and some great photos. I was only up at Santa Pod for the Sunday and really enjoyed the event: only complaint was the awful commentary/organisation. I very nearly missed the AWD final as the timetable was changed and very little was said about it! Hope that Block, Gittin Jnr. and Gymkhana Grid returns to the UK again next year!

hold on a second...
General Lee, Bullitt, and what looks to be KITT in one photo?

can you do a feature on the fiat 126 please

@weasel
lol, I just noticed that

@Aldarris Wow, that is a shameful error! I can't even blame it on autocorrect... Sorry!

@Aldarris Wow, that is a shameful error! I can't even blame it on autocorrect... Sorry!

@craig dodd I definitely plan to get out to a UK drag event once the season kicks off next year – so stay tuned!

@craig dodd I definitely plan to get out to a UK drag event once the season kicks off next year – so stay tuned!

Always a fan of Ken Block, but damn i love Gittins' Mustang!
General Lee, Would love to see it in action on the grid!