The Autumn Motorsport Day at the famous Brooklands oval circuit west of London was awash with beautiful examples of cars from across the decades, as befits a venue with such a long and illustrious history. Tomorrow I’ll take a more general look at the festival itself, but in this story I want to turn the spotlight on just some of the cars at the event – and where better to start than with one of the most attractive cars ever constructed, the Mercedes-Benz 300SL Gullwing.

The revitalisation of Brooklands, and the prevention of further damage to this valuable motorsport site, has been helped by the arrival of Mercedes and the construction of their enormous Mercedes-Benz World facility. Many priceless examples of classic three-pointed star models are on show there, and not only are Brooklands events allowed to utilise their test track but also Mercedes often bring out some of their own cars to show off on these jointly-hosted events.

The 300SL was introduced in 1954, with its extremely lightweight spaceframe chassis meaning the car weighed in at just 1,310kgs. The chassis design, based on Mercedes racing cars, also dictated the iconic door design: the gullwings were the only sensible option to bridge the wide body and high sills.

Production cars used aluminium doors, bonnet and boot lid, but 40 cars were made with all-aluminium bodies – an incredibly expensive option and the equivalent of using carbon fibre today. Inside this 300SL, the original tailor-made, colour-coded luggage was strapped into place.

The 3-litre straight-six under the long nose could power the 300SL to over 160mph, making it the fastest production car of the era. Fuel injection meant that the road-going car was actually faster than the racing car it was based on. We’ll be taking a look at the cars of Mercedes-Benz World in more detail later this month.

At the other end of the expense scale but just as iconic, the Seven cemented Lotus’ position as manufacturers of the affordable sportscar for the road, but before that model came the VI. Like the 300SL, this car was also built on a lightweight spaceframe chassis with an aluminium body in 1954, but unlike the Merc the VI typically came in kit form!

This developed VI with enclosed rear wheels was almost unbeatable in its class when racing in period: despite it effectively being a home-built special mounting an MG XPAG engine, at the hands of its designer Peter Gammon it became part of the first Team Lotus sportscar team alongside Colin Chapman himself in a MkVIII.

UPE9 won the support race for the 1954 British Grand Prix at Silverstone, but was then sold on and had a long competition career around the UK, sprinting, hillclimbing and racing, even ending up upside-down after a climb gone wrong on the island of Jersey.

The car was restored in 1978 and new aluminium panels installed, with UPE9 returning to competition in the 1990s – and it has continued running ever since. At Brooklands, the driver was a little too keen on the the throttle up the Test Hill in the afternoon, and managed to catch considerable air as he crested the top! Needless to say, further runs were a little more circumspect.

Funnily enough, far fewer VIs were built than Mercs: just 110, compared to the one and half thousand 300SLs! The values aren’t quite to the same proportion though…

A pair of pristine Mark II Cortinas were lined up in the Brooklands paddock, including this example with an mean-looking bonnet scoop showing that something sinister was lurking under the hood…

In this case it’s the big K&N air filter for an uprated Essex 3.4-litre V6 unit, giving a very different performance level to this 1600E.

Savage Cortinas were originally built in the late ’60s by Jeff Uren and his company, Race Proved Performance And Racing. Following the very agreeable ‘big engine, light chassis’ formula, they shoe-horned Zodiac V6s under the Cortina’s hood, strengthened the chassis and beefed up the suspension, brakes, exhaust and cooling.

Savage Cortinas were sleepers of a fashion – in standard form, without the bonnet scoop, they were little different from stock 1600Es: Minilite wheels and the sunroof were the only other obvious external identifiers.

With the engine bay rather fuller than in stock form, the battery was relocated to the boot. At rest the Savage sticker on the rear window is the only giveaway, but when the engine is running it’s another thing!

Bentleys are intrinsically linked with Brooklands: they held the lap record at the track for several years in at the ’30s, getting up to speeds of near 140mph on the fearsome oval – a track only rated to a top speed of 120mph.

This Bentley 4.5-Litre Open Tourer is from 1928, the year that a similar car won the Le Mans 24 Hours – the second of four consecutive victories for the marque.

The engine capacity was a halfway-house between the previous 3-litre and 6.5-litre models: the former considered underpowered and the latter uncontrollable on the roads of the time.

YW6775 was rediscovered in the ’70s as a bare chassis and rebodied with replica Vanden Plas-style fabric tourer coachwork and fitted with an external brake level. It was part of the collection at the National Motor Museum at Beaulieu for a while before Burbling Bertie was bought by Richard Wade and the engine rebuilt.

Like most of the cars here, even the Bentley was being merrily thrown up Brooklands Test Hill, and it was more than capable of powering to the top without a struggle.

Sprinting up the hill even more quickly was this Audi A1/A2 Quattro, which like the Bentley and Lotus had also been firing around the twisty Mercedes-Benz World Test Track earlier in the day.

The Quattro was originally built by a privateer team in Belgium and ran in Audi factory colours before being converted to Rallycross spec, in which it competed across Europe. The car came to the UK in 1992 and was rallied for a decade before being bought by the current owner in 2002, a long-time Audi fan and member of the Quattro Owners Club for 20 years.

Supplied with as a non-runner with a big box of spares, it’s been rebuilt to this glorious spec. The 10-valve engine produces over 400bhp, and with a short sport ‘box it assumes the proper nose-up Quattro stance under hard acceleration.

A MoTeC system has replaced the original Kogel Fisc fuel injection system, which despite having no launch control or anti-lag still means the power is big but controllable – and lots of fun! It’s always interesting to see original road-car parts in a racing machine, like the heating controls here.

S1 callipers are on the front with standard A2 units on the rear, and the suspension has been jacked up to give an extra six inches of travel and an aggressive gravel-rally look.

Finally, a wide-bodied De Tomaso Pantera GT5-S: the ultimate boys toy from the ’70s, like taking a Lamborghin Countach and mating it with an angry atomic bomb. The original, more controlled style of the original Pantera, complete with hand-made Carrozzeria Vignale bodies, might have been more refined but were plagued with mechanical and safety problems. There’s a story that alleges that Elvis Presley shot his Pantera after it failed to start one day…

The Pantera – the Panther – was the result of a tie-up between Ford and the low-volume Italian firm of De Tomaso, taking their previous engine supply deal for the Mangusta up a notch, with Ford’s idea being that the mid-engined Pantera could compete with GM’s Corvette.

As if the styling of the Pantera wasn’t enough – especially in these extreme GT5 and GT5-S models – the engine sound was the thing that won most people over.

The Countach might scream, but the spluttering 5.7-litre 351 Cleveland V8 of a Pantera makes a gleefully deep rumble that shakes the very earth. Coming straight at you it’s enough to make you want to run and hide!

A surprising number of Panteras were constructed during a production run that was in itself remarkably long: almost 7,000 were built during its 20-year span, beginning in 1971. Most were sold into the US market, making them quite a rare thing to spot in the UK. Over-tyred, over-powered and over-here. Just how we like it. 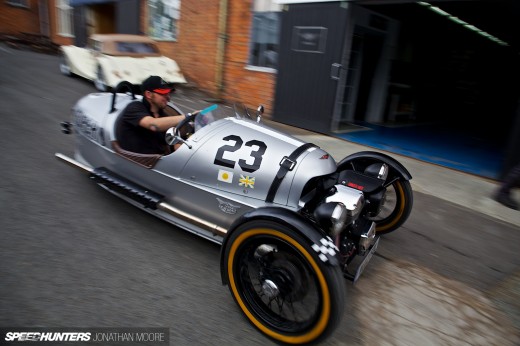 Making A Morgan:
If You Could, You Wood Too

Pantera, Audi s1, 300sl.... oh my. What a fun event and mix of cars. Great pictures. Really get jealous of some of the classic car shows across the pond. Things like this or goodwood are on the bucket list. Thanks for sharing

Hello Charles! Thanks! All shots are exported straight out of Aperture, so they have EXIF attached. I've just checked and that Gullwing image definitely has EXIF data embedded.