Here at Speedhunters we often push ourselves to cover unfamiliar territory, new car scenes or emerging styles. It is something that we have to do to not only keep coverage fresh, but make sure we tap into every possible angle of car culture out there. At times may find ourselves out of our comfort zones and that is a good thing, but yesterday, I couldn’t have felt more at home at Fuji Speedway.

I was surrounded by some of the best GT-Rs in Japan, hundreds of owner cars stretching as far as the eye could see.

Famous tuners from across the nation flocked to Fuji for this year’s R’s Meeting, an event of epic proportions put on by the guys at GT-R Magazine.

No matter which generation of GT-R you may be into, there was more than plenty to see.

…there was so much to drool over in the tuner display area. This is where you can really nerd out, checking over every car, looking closely at new parts and upgrades that will end up on that long mental wish list every car-guy out there keeps.

It’s was great to see how tuners like Mine’s have been working on their demo cars, which on top of the mighty fast R35, continues to research and develop parts for the previous, RB-powered, generation of Rs.

GT-R owners around the world have forever been relying on the awesome products from companies like Tomei Powered, which have never stopped developing parts for these cars we all love so much. Along with their new Arms line up of turbo kits for the RB26, they have just created an-all titanium front pipe which on top of giving you better flow and potentially more power, looks more like a work of art than a simple exhaust section. More on this soon.

HKS have really been working hard at perfecting their R35 time attack beast. Just look at that engine!

Top Secret was present with no less than four cars…

…Smoky taking a break from work to spend some time with people that, like him, love everything the GT-R stands for.

Parts spotting is one of my favorite things to do at these sorts of gatherings, seeing what owners are doing with their own cars. It’s always impressive to see just how far some are prepared to go on brake upgrades, this was one of quite a few R35s running monster Alcon calipers.

…with the main event of the day consisting of a tuner drag race.

Above is Morishita-san from Pit Road M purging the nitrous system in his BNR34 before going out on track.

…I thought the idea of doing a drag race was very cool. I’ve always found it a bit of a pity at how quickly drag racing disappeared as a mainstream form of racing Japan, so it was cool seeing some wild high-power GT-R launch down the Fuji straight.

Old vs. new; who do you think won?

…it’s almost hard to choose where to start from. Check back tomorrow for some more GT-R awesomeness. 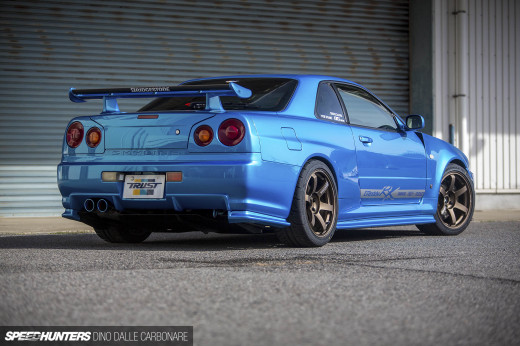 I would love some desktop shots of this GT -R  madness.

Timeless cars. The R34 looks so mean, even years later.

anyone else simply not care at all about the r35s?  why do so many of them always show up?

it's like when you go to a ford or mustang show and all you see is rows upon rows of 2005+ new mustangs.  cool story bro, you opened your checkbook and bought a car.  not really interesting when i can go see your car at any nissan dealer.

Why are you hating on R35s. Are you saying when the R34 was out and at the dealer it wasn't interesting? You make it sound like any body who opened their checkbook for a new GT-R wasn't some kind of "true" GT-R fan. By looks of the first picture, probably when the show was filling up, it looks like each generation was well represented.

was the R34 never sold in yellow? i could have sworn it came in yellow in GT2, but i haven't seen a yellow one since then

@ComJive
Good point! Maybe the game was inaccurate? Which would be out of character for GT....

Heaven!
Who won in that Old vs New contest ?

by that mentality, anyone who isn't an original owner of something newer than a Model T could say the same thing about all these new fangled cars rolling around

A picture of your GT-R is missing Dino! definitely what an AWESOME MEETING!

What's wrong with new cars? I never understood people like you.

@Adrian Senna That's because I didn't drive it there

They will be coming...

@SeanStott R35 owners in Japan spend a ton of money on their cars.  With everything costing 3x what it used to cost for the older-gen GT-R it's not hard!

@indytrucks In almost all cases the old cars took it.

@speedhunters_dino @JaxTBear Government types always seem to want to take away all the good stuff in life.

@thermos Yes, go to our facebook page to see the on-board video;)

@SeanStott
at any point, someone, somewhere "just" opened their checkbook and bought the car..doesn't matter if it's new car or old, doesn't matter if they did it 2 weeks ago or 40 years ago.  How does that make them any less of an enthusiast?

Ahaha, magical. Thanks Dino! And as others have said, amazing coverage as usual!

@Nismo Omori Factory
The R32 GTR, is and will always be the king. It won more than any other Japanese car, it was legendary and changed everything in 1989. Long live (The original and only) "Godzilla".

i don't have a problem with them simply buying the car, or questioned whether or not they're an enthusiast (if you can't wrench on your own car, you're not an enthusiast by the way)

the issue is that these brand new cars crowd all the car shows.  that's my gripe - i go to ford shows and see hundreds of 2005+ mustangs.  or nissan/datsun shows and there are nothing but new GT-Rs.  i see three on the way to work everyday.  i know it's a cool car, but what's the difference between that and a new Altima?  i'd rather see customized 90s Altimas than a brand new GT-R.  at Cars&Coffee in irvine, it's nothing but new 911s, new lamborghinis, and new GT-Rs.

maybe it's becuse i work for an automotive related firm and get to drive many of those cars, but they bore me to death compared to other stuff that's out there.

I still dont get the point of what this guy is trying to say. Just an R35 hater i guess. He's in his own little world.

Your main picture has been copied and is now being used to peddle some fake car lottery scam on Facebook. As copyright holder you're the only one who can get it taken down. https://www.facebook.com/pages/Nissan-skyline-R34/1048492871842526