SHARE Make Mine A Large: New Rules And Old Traditions

It’s the noise you miss most once the 24 Hours of Le Mans is over. During the preceding week in the build up to the race, you get used to the roar of engines that starts mid-afternoon and tucks you in at night. Until race-day itself that is, when you’re surrounded by a constant, inescapable cacophony of noise. The sounds from the engines ricochet off the tribunes on the start straight and echo off the trees all the way around the long 13km circuit and into the many camp sites for a period of 30 hours.

But why would you want to escape it? It’s what makes Le Mans – and the other great endurance races – the events they are. Ringing ears and a lack of sleep are badges of honour for any aspiring motorhead, and the closer you can camp to the track the better.

Around the sprawling site of the Circuit De La Sarthe that straddles the N138 south of the city of Le Mans, 240,000 spectators settled in to soak up race week: a representation of race fans from across the globe, with enclaves of nationalities recognisable by the flags, singing and music coming from behind each fenced-off campsite.

The environment that the track sits in has changed dramatically over the years, even if the trace of the tarmac itself would still be mostly recognisable to drivers of yesteryear – though they would surely complain about all the fussy sweepers and chicanes added in over the last 20 years. I’ll be taking a look at the history of the track in an upcoming Temple Of Speed story.

The Ferris wheel, previously sited on the run down from Dunlop to the Forest Esses, is now installed by the Ford Chicane; the drop from Dunlop now describes an s-shape rather than the arrow-straight descent of the original track; the sweeps of the Forest Esses are now surrounded by acres of gravel traps. But it’s still undeniably Le Mans. It’s still about big, fast cars, a groups of friends and a couple of beers.

The cars have also seen modifications this year: in prototypes, big shark-fins slice down the spine of both the LMP1 and LMP2 cars, tapering to the tail wing in various degrees of elegance. With 2011 having seen the swan song appearance of the ‘grandfathered’, previous-generation prototypes, all LMP cars now had to conform to the complete set of latest rules.

Another change was the diktat that the aerodynamic louvres sported on prototypes above the front wheels must now become cut-outs: this is despite the rules having been implemented in the other direction over the last couple of years, where cars were even black-flagged for having their louvres punched out by tyre debris and turning into holes. Plus ça change…

The green-stickered GTE-Pro class saw the biggest visual changes this year: after raised eyebrows from rival teams about the Ferrari 458 Italia, all the other manufacturers were allowed to fatten up and widen out to match the Ferrari. Orange-stickered GTE-Am cars had to conform to the previous year’s regs.

The Ferraris themselves are virtually unchanged on the surface between then and now, meaning the colour of the number panel is the only clue as the spec, though under the hood the ’12 cars have been revised.

The most noticeable differences in Ferrari’s competition are at the back, where the cut-outs in the bodywork behind the rear wheels give a clear view of how the big diffusers and rear wings work together to produce huge downforce levels. The Corvettes have much more savage cut-outs above the rear diffuser and enlarged front and rear fenders which make the body far wider than last year.

The French Larbre team ran a pair of lean ex-factory C6.Rs in the GTE-Am class with the original tail configuration.

The new rules were definitely good news in aesthetic terms for Porsche, where the pair of Pro wider-body cars took on an almost Group 5 look from certain angles. Fat Porsches are always a good thing. The flip side was that the update wasn’t giving Porsche the performance lift they hoped for, and in fact the Am-class 2011 911s were right up with the 2012 models on pace during Qualifying.

The previous model looked positively pedestrian across the flanks in comparison.

You can really see how the rear of the 2012 cars has been stretched out to the maximum width, again with the cut-outs behind the rear wheel to help air-flow. Vertical strakes hold the Porsche’s car-width diffuser in place – very different to that of the Ferrari’s.

On the surface there seemed to be little difference between the Pro and Am Vantages, though in fact there have been significant aero tweaks: the 2012 vintage Vantage has a new splitter, endurance lights in the nose and NACA ducts on the hood.

Underneath the skin was where the more important but less noticeable changes have taken place: the new car had revised uprights and a lowered subframe to improve serviceability: previously the entire front of the car had to come off to change the engine – now it could be done in an hour.

The cross-plane crank 4.5-litre V8 made a monstrously deep rumble which was on a par with the Corvettes – this was rather unfamiliar for Aston Martins after the howl of the earlier V12s. Another one to catch fans out playing ‘identify the car only from the engine note’ from the side of the track…

This race is as much about the fans as it is the manufacturers: it’s an annual pilgrimage where every kind of car can be seen around the site, from the most common to the ultra rare, all parked up in the sea of tents. This one was stopping a lot of passers-by – a Qvale Mangusta from 2002, which was also marketed as a De Tomaso in some territories and later developed into the MG XPower SV.

Stickers are the regular addition to otherwise stock cars with Le Mans 24 Hours stickers being the most popular choice, but around the campsites there were plenty of of home-brew alternatives.

Cruising round the connecting roads of the interior of the track was still possible on the weekdays ahead of the mass influx of people before the race – a mass influx that is getting earlier and earlier in the week each year.

The other thing about driving round is that you will likely be forced to do a burn-out by the mass of people who line the main access roads. This is as serious a spectator sport as the race itself: hundreds of people set up chairs and beer supplies (and paddling pools on occasion), sit back and watch the passing cars burn one up. Those cars that meekly try and push on whilst hoping to get through without a soaking from the waiting water pistols are seen off with jeers and slow claps…

For every high-end car…

…you can always find something rather more down to earth. A pair of two-door convertibles with a couple of subtle differences.

There is always plenty to find even in the surrounding villages after which several of the track’s corners are named: Arnage is always overwhelmed with fans and cars; Mulsanne this year had a fine line-up of American heavy metal.

Friday is the day to check out all of the extra-curricular delights on offer, when there’s nothing happening on track and just the open pit-lane to tick off the list. It’s a good opportunity to saunter round the many displays, stalls and shops.

There are two main areas to spend cash: the recent Village development where all the manufacturers have their stands, and then the line of markets stalls running behind the start-line tribunes. The Village had representatives from all the main competing companies, with the jewel being Audi’s quartet of Quattros.

It’s almost impossible to come away from Le Mans without buying some kind of souvenir and there are plenty of options available, starting with the €1 recyclable beer cups.

In the book stalls, the owners get understandably frustrated if treated as a reading room, but it’s still interesting to browse the many book vendors and hunt for rare tomes.

Even more dangerous are the model shops. Having kept strong at the Nürburging’s gas station-come-model shop opposite Döttinger Höhe, the options on show at Le Mans were even more difficult to resist. Buy me… buy me… Though some required small fortunes to walk away with.

But look at it! It’s like going to a pet rescue centre. They’re all looking at you with sad eyes wanting you to take them away.

Some merch is easier to fend off than others. Normally it’s difficult to go wrong with the Gulf livery. I would suggest this top is very wrong.

With many families turning up to watch the race, it’s also the place where a lifetime of addiction can so easily begin. It can all start with the sound of a racing engine and an iconic badge. I know it did for me, and look at things now… 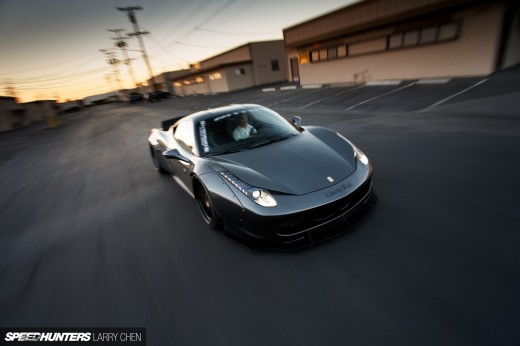 Not Afraid To Shock: Liberty Walk 458

good stuff.  you are really good at panning shots.  that second corvette shot is fantastic.

Not one interesting car. Well maybe that IMSA audi. Were there no Japanese cars there?

@wheatgod
if none of those cars are interesting to you, i feel you're on the wrong website

@777 Really? Sure seems theres a lot of Japanese car coverage on this site. Maybe you were thinking of a different site.

interesting to soo a HSV GTO at LeMans...  that'd have to be very rare in france!