After checking out the cars that stood out the most in Mobara this past Sunday, it’s on to the Best 16 battles that kicked off in the afternoon, after all what would drifting be with some a bit of tsuiso!  The first bout of the day was between top qualifier Naoki Otani in his Evolexlink S15 and Atsushi Kitazawa in the Illusion JZX90 Chaser. A fiercely contested battle with awesome driving that saw the bigger and more powerful Chaser move up to Best 8. Kitazawa ended up loosing to the turbocharged Levin of Daisuke Fukuda, who proceeded to the semi finals.

…after Bungo Maemori crashed into his side. The MarkII came away with a minor, albeit pretty large, dent on its side but the S15 was looking a bit sorry for itself.

It’s great to see whole families coming down and checking out events like these, the welcoming and chilled out atmosphere adding to the enjoyment. Entry fees are minimal, unlike D1-GP, one more incentive to choose the more grassroots oriented side of drifting rather that the marketing and promotion driven pro-circuit. It’s only drifting that matters here!

Andrew Gray came to Mobara with the intent of bringing home as many points as possible so that he could hold on to his second spot in the rankings. In his Best 16 battle he had to see it off against Mikihito Kawamura and his Origin Labo S13. Andy had a good first run putting distance between him and his opponent, going for a slightly tighter line on the exit.

He kept glued to the Silvia on his chasing run and got the nod from the judges to move into Best 8.

It was a battle of the S15s when top ranked driver Yuji Saito went up against Osamu Sasaki in the CS-Ducks Silvia. Saito had the upper hand and moved up to Best 8. His opponent would be the winner of the next battle…

These guys had a series of great close battles but it was Kawashima that took the win and proceeded to the next round.

The battle between Andy Gray and Yuuki Takamiya of Team Magician was looking to be an exciting one as both drivers threw their cars sideways at high speeds for the entry into the judged corner. Andy kept his line but Takamiya came in too fast and had to slam on his brakes to avoid hitting the Powervehicles MarkII. Andy grabbed the win and headed straight into the Semi.

There he would meet Saito, who after beating Kawashima was ready to see it off against the Scotsman.

However, in Andy’s leading run Saito messed up his entry and gave up attempting to catch up.

With a rather big advantage it was time for Andy to follow, and despite Saito’s great run there was no way he could make up for his initial mistake.

So for Round 2 Andy was once again in the final, a battle of the Toyotas, his JZX100 against Yasanabu Umebayashi’s JZX90. Prior to the run both drivers were allowed a slow lap to help their engines cool down a little, seeing how fast the Best 16 competition had been run. Andy seemed to have some issues with his clutch but with no choice but to drive he went for it, starting off with a nice aggressive entrance with his rear wheels on the very edge of the rumble strip. Umebayashi managed to keep nice and close but Andy’s clutch was beginning to really let go by this point…

…not allowing him to keep the distance he wanted. The judges called a “one more time” where Umebayashi had the obvious advantage. With the final over, Andy’s JZX100 wasn’t even able to move any more, the clutch slipping badly and sending no drive to the wheels.

Team Orange D1 driver Naoto Suenaga, who was the part of the judge’s panel on the day, had the drivers line up in front of the spectators…

…where he announced Umebayashi had taken the win.

Umebayashi, who wasn’t present at the first round in Nikko took home 25 points, putting him fourth in the standings.

Saito’s third position yielded enough points to allow him to hang on to the first spot in the East Division rankings, with Andy only one point behind, 43 vs 42. The third round in the SL series is being held this coming weekend at Meihan, so there are a lot of preparations both drivers need to do before then.

With his JXZ100 well and truly done for the day Andy had no choice but to walk back to the pits, happy with the result despite the mechanical issues.

I will definitely be trying to revisit the Street Legal series later on in the year, as it’s just about the best way to enjoy some awesome drifting in Japan right now! Don’t forget to scroll down and check out some of the desktops I’ve prepared from this round at Mobara! 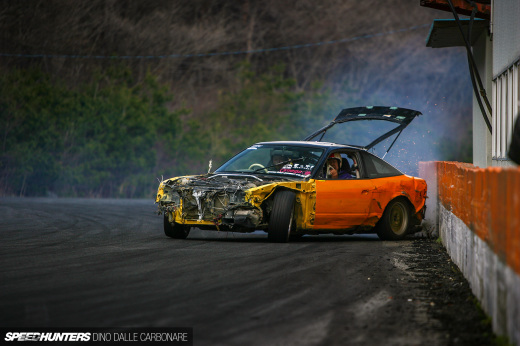 Both Mark IIs in the final are JZX100s I believe?