We try to showcase as many of the world’s mouth-watering car builds as we can here on Speedhunters, and sometimes end up digging quite deep to find them. Occasionally though comes a project that is completely mind blowing. A “viral” build if you will.

This particular build is one that’s already gained quite a bit of attention on the net recently, but there was no way we couldn’t share this one.

To be honest I wasn’t too familiar with the European market Ford Granada before seeing this. When I first heard about this build I was thinking it was based on the US market Ford Granada – a rather forgettable car from the late 1970s. Even in Europe, the Granada isn’t a car you seeing being “built” very often, and that’s just one of the reasons why this particular build is so awesome.

Another reason is its exotic, and brutally powerful engine choice – a twin turbocharged version of the Ford V8 that comes from a Koenigsegg CCX. It wasn’t cheap of course, but this build isn’t about budget – it’s about doing crazy stuff just to see if you can. What’s not to like about that?

The owner out of Norway actually has a long history with the car, one that goes back over 16 years. In 2008 he had already transformed the old sedan into quite a sleeper with a 600hp Cosworth motor swap, but he wanted something more. When a 600hp sleeper just isn’t enough you know there’s something wrong with you – in a good way.

He came very close to doing what most people would do in the same situation – buying a “better” car. He was actually considering importing a Skyline GT-R from Japan, but in the end he decided he would stick with the Granada and take it to the next level.

Scratch that actually – he wouldn’t be taking the Granada to the next level, he’d be skipping several levels with this rebuild. His destination was squarely at the “insane” level.

As you can see, it was much more than just outfitting the Koenigsegg motor and calling it a day. In fact, the entire car was stripped down and rebuilt from the ground up.

The Granada’s rear suspension would be completely redone, with the factory setup from a 2004 Mustang Cobra used as a base.

All of the high end parts aside, the level of custom fabrication alone in this build is simply incredible.

Here’s a later view of the rear suspension area with pushrod coilovers outfitted. Also note the fitment of the exhaust system.

The thorough fabrication expands to the Granda’s interior as well.

Here’s a look at the custom fabricated transmission tunnel for the Tremec unit along with the center console area.

Heavy work was needed to just make the V8 and its pair of enormous turbochargers physically fit in the engine bay. This is before getting the motor tuned properly and dialing in the chassis to deal with the massive power increase.

Of course a gigantic intercooler was needed for this engine setup, which can be seen here formed into the front end in rather stealthy fashion.

Here’s a view of the entirely redone front suspension, along with the Porsche-sourced brakes.

One more look at the completed rear diff setup.

Here’s the finished engine bay. When all is said and done, the car will make serious horsepower. With this turbo setup it’s been said that 1,700 horsepower is entirely possible.

What I like especially is the way the exterior is so stock looking, with all of the original bumper and trim components intact. It doesn’t look “slow”, but it’s definitley a sleeper when you consider what’s under the hood.

If you’d like to see more photos and details of this amazing project, head over to the build thread on the Corsasport.uk forums.

Building A WRC Car In Your Shed 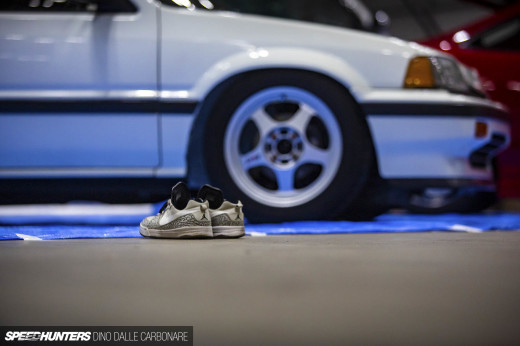 HOLY *insert expletive here*
That is some serious vision right there

The crazy Scandinavians, always thinking completely outside the box and blowing our mind with some rad build....

This is one of the craziest builds I have ever seen. Hands down, nothing else can beat it in terms of workmanship, and being able to find a Koenigsegg engine.

The engine probably comes from an CC8s not CCX, the cc8 was the last one to use a ford engine.

Oh yes, I saw this thread detailing the build more than a year ago. Good to see it's nearly finished ! I still wonder how they have been able to find a Koenigsegg engine ...

Now someone will swap a Koenigsegg engine and drift. LOL.

If I am right ths guy who buildt this has also buildt the worlds smalles working and drivebale motorcycle. If I am not wrong.

If I am right ths guy who buildt this has also buildt the worlds smalles working and drivebale motorcycle. If I am not wrong.

Dafuq have I just read?

Dafuq have I just read?

Respect to the builder that kept it pretty much stock looking.  Great sleeper/Q-ship

Respect to the builder that kept it pretty much stock looking.  Great sleeper/Q-ship

Is it me, or does the granada look ALOT like the XD/XE/XF series of ford falcons from Australia? love the workmanship, a top notch build.

I believe its smaller than a Falcon , based more on a TE Cortina?

i too have a MK2 Granada and was planing on putting a twinturboed SAAB engine in it. or maybe i should just kill myself now

Man, that radiator is huge! Looks like a Rolls-Royce Phantom grille!

A video if this beast ?

That guy must have done graft with Koenigsegg.

That guy must have done graft with Koenigsegg.

The Granada looks very similar to an Australian Ford XD Falcon... though I don't think there's too many 1700hp twin-turbo XDs motoring around! Utterly ridiculous in the best possible sense.

A granada is much longer and wider then a cortina  .
The falcon xd design was inspired by the granada thats why they look so similar .
I absolutely love this car i have a granada myself but it only has 100 hp

What an awesome car!

I remember seeing this build a few years ago in its early stages being blown away. Can't believe I forgot to check back on it! What a finished product hahahaha. Unbelievable

I am the builder of the car and just want to emphasize that the engine is based on a ford engine, severely modified yes, but the same was the case with the first generation of koenigsegg cars as well, they used the ford modular as the starting point and made it into the´re own masterpiece

Thanks for all the massive support and nice comments tough, REALLY appreciate it

Join us on facebook if you want to se&hear more

I am the builder of the car and just want to emphasize that the engine is based on a ford GT/shelby 500/CCR engine - severely modified yes, but the same was the case with the first generation of koenigsegg cars as well, they used the ford modular as the starting point and made it into the´re own masterpiece

(http://en.wikipedia.org/wiki/Ford_Modular_engine)
Thanks for all the massive support and nice comments tough, REALLY appreciate it

Join us on facebook if you want to se&hear more

Discount for Weathertech floor mats for your car https://www.youtube.com/watch?v=Yy1OQDguCx8