The Alfa Romeo SZ. Nicknamed ‘Il Mostro’ – The Monster’ – it was the product of a collaboration between Alfa Romeo, Fiat and Centro Stile Zagato, although Zagoto’s eventual contribution to the project was more in the manufacturing and the iconic badge on the side of the car than the design. Whether the SZ is a monster in performance or looks is down to the individual – it is, if you’ll excuse the parochial reference, very much a Marmite car: you either love it or hate it. Me, I’ve coveted an SZ since I was a teenager. 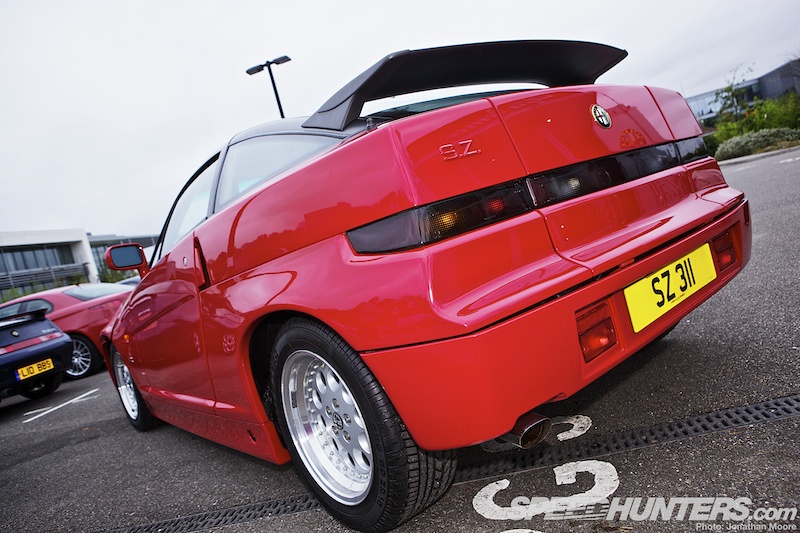 The original concept, designated ES-30, was introduced at the 1989 Geneva Salon de l’Automobile and rather like the modern 8C the SZ concept was effectively what went into production in 1990. Fiat had recently taken over the ailing firm, and wanted to demonstrate that it could reinvigorate the firm to once again produce a great sportscar. The car was designed using early CAD technology and the body constructed from glassfibre-reinforced, injection-moulded thermoplastic resins. A limited production run of 1,000 cars was constructed, with a waiting list of customers signed up as soon as the car was announced. 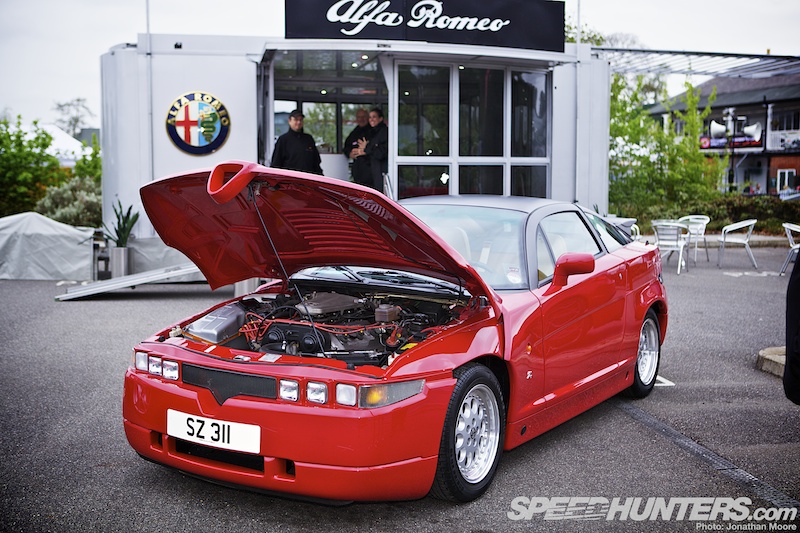 The SZ admittedly had quite extreme looks even for the time. Its short wheelbase, high sill and sharp lines turned heads – but not always for the right reasons. Except for a single example in the hands of Andrea Zagato himself, all SZs were available in one colour: Rosso Alfa. The car sat close to the ground on low-profile Pirelli P Zeros; to compensate for its low ground clearance the SZ was fitted with a hydraulic system to raise the suspension up by 50mm to clear speed bumps and other obstacles, operated from a button in the cockpit, just by the numbered plaque each car carried. But as far as technology went, that was pretty much it. The SZ was about driving experience: a return to the old-school Alfa principle. 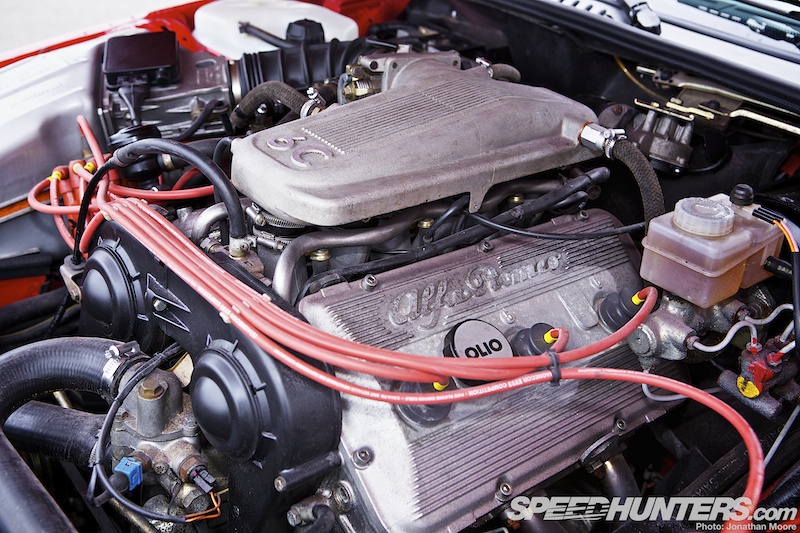 Alfa’s competition department were let loose on the engine and handling; the underpinnings of racing Group A/IMSA Alfa 75s were used as a basis for the suspension geometry, and the 75’s 3-litre, light-alloy high-angle V6 modified with new intake and exhaust manifold, a wider air filter and better cooling. Power from the V6 was 210bhp, the 0-60mph time was around seven seconds and the top speed over 150mph – great performance for the asking price: around $50,000 at the time.

In 1991 the balance of the 1,000 cars were delivered, with just 50 imported to the UK – the SZ was only available as a left-hooker. There was even a one-make racing series for the car, with participants receiving a discount on their purchase once they committed to racing. Despite a lack of commercial success, in 1992 the roadster-bodied RZ was introduced, but less than 300 were sold. 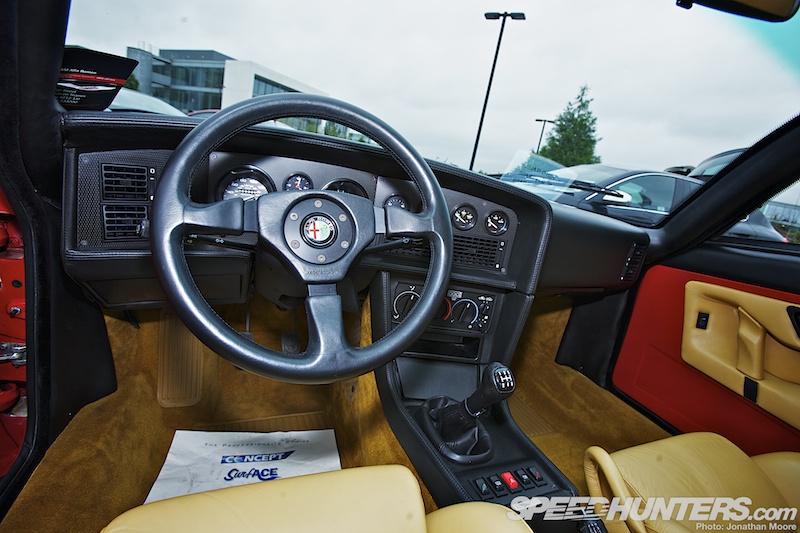 Although the cockpit has a stripped-out and racy appearance, unfortunately the dash was plastic-coated, faked ‘carbon’ style – these were replaced with matt-black aluminium panels in the RZ. The SZ came with a custom car cover in a red Alfa holdall (which was sitting in the rear of this car), and also included a leather bag to store a wheel if you had a puncture. The rear-seats – weren’t. The SZ was a two-seater, with just a carpeted rear for stowing bags. A complete set of bespoke leather luggage can be now commissioned, based on an original set used in promotional material: the cases stack together to fit perfectly into the rear space and contain more leather than the interior of the original car…

Modifications are available, but it’s unusual for people to customise their SZs. It’s that kind of car. In this case, the SZ was owned by someone who worked for the local Alfa Romeo dealership, truly showing their marque passion, and had just 300 miles on it since new. A reasonable amount of that had been racked-up recently getting the car fully serviced and back into pristine condition. And possibly for sale… So, there’s likely the rare chance to own an SZ coming up very soon. Must. Stay. Strong.

that front view makes its look look like a more aggressive BMW, like the small row of heads lights, but that engine bay could use some work.

One crazy design of a car, wish we had more zagatos now

@the_hub Needs work in what way? It looks good to me.

Hello SpeedHunters!
I'm having a problem with the site. When I click on "Next Page" to see older posts, the first thing I see is Loeb's news about his victory in WRC. That story is from May 1st, and the next pages have even older posts. I have tried different browsers and computers and it's the same thing, so I assume this problem happens to everybody.

Can you fix this issue? I would really like to read the posts I haven't seen. I can't even use the Contact feature you guys have on the bottom of the site; it says that the message fails to be sent.

You can't have the words "truly showing passion" and "300 miles since new" in the same sentence. What's passionate about NOT driving a car? Whoever owns it should sell it to somebody who's not going to let it rot without ever being driven properly.

Photos are good, however I would prefer the skyline not to be fallen on the rear view of the car, since it already has strange enough design, and i couldn't put it all together in the head)

Was this in a dealership in Maidenhead for a while? Used to drive past it on way in and out to Henley

I too have admired this car since I was a teenager, mainly for the look of the front end, the rear is not so cool. But the front is so agressive/tough looking, almost like a truck. Add a front lip and more agressive wheel/tyre fitment and one of these would be a jaw dropper!