Time slows to a crawl at night during endurance races. For a period that takes up well over a third of the race, the darkness does more than make it extra difficult for drivers to pick their way round the pitch-black track – it also shrouds the race itself.

With the race’s TV coverage put into standby (blinding headlights in pitch black hardly makes for ideal pictures) the teams have to revert back to pure telemetry reports and timing screens, having to fly their cars blind and almost in isolation of what’s happening around them.

The glare of the pits casts an eery glow over the main straight.

Out round the track, GT3 cars passed by as flashes of white, red and blue. On the Grand Prix track, where there is at least some ambient light, you could make out models and reflective number panels gave you some chance of identifying individual cars. Out on the Nordschleife was another matter.

For an hour or so mid-evening, some fans at the track had other forms of entertainment on their mind: with a big football game showing that evening, people crowded around any place with a TV screen showing the game, from the big flat screens in the Audi hospitality to small portables in track officials’ offices.

There was no chance of diverting the teams. The #4 Speedhunters WRT Audi had struggled during its fourth stint in the hands of Allan Simonsen: time had been lost because of all the neutralised zones around the track, so Edward Sandström had been thrown at the Nordschleife for a double-stint.

After nearly three hours in the car Edward pitted for the second time just before midnight, but this time jumped out and handed over to Andrea Piccini, clutching his new seat insert.

The team went to work as Edward helped strap Andrea into the car – he was soon ready and the R8 LMS was sent back out to continue its battle.

Three hours of total concentration and extreme effort takes a massive amount out of drivers. It’s like looking at a different person when the helmet comes off after a long stint.

The whiteboard for the driver roster in the shared pits showed how the team had run the race so far and just how much of the responsibility Edward has shouldered. Time for a deserved break and some rest.

There was no break for the team… And the race was just a third done.

After being in contention right at the front during the early evening, the #29 Marc VDS car had slipped out of the top 10, but had been gradually clawing its way back.

Past midnight, the chase of the leading #19 Schubert BMW Z4 had been handed over to the #2 Audi, which would take the lead as #19 cycled through its earlier pit strategy – though #19 was still often the fastest car on the track and had led the most laps overall. In all there had been 19 lead changes between four cars: #19, #65, #11 and #2.

A lot of bonnets were coming off BMW Z4s in the pits around 1am – looking like part of a regular fluid change programme.

The first reports of rain around the track came in at 2.30am – or, as my literal web translation from the German says: ‘The weather frogs have boom; rain using now is announced in parts’.

Gradually the #19 BMW’s strategy was pulling it away from everyone except the #2 Phoenix Audi. Each time it emerged from the pits after a stop it was higher up than the last time – after its ninth stop it came out in second rather than third to the yet-to-pit #2. With almost nine hours down it looked being a straight fight between these two cars. But 24-hour races are fickle things, as we’d find out.

…but were soon back out in the pit-lane to receive the car again.

The car was examined, and then dragged back into the garage.

It seems that Andrea was lapping a car entering the Nordschleife and collided with it, cutting a tyre and damaging the car. With the tyre replaced, Oliver Jarvis took over the car and went back out but reported something majorly wrong so brought the car straight back in. The steering column and right-front suspension components would need replacing, losing the car over an age and tumbling #4 down the order and out of any contention for a good result.

The #11 Manthey Porsche appeared to be the dark horse of the race, also on an off-kilter strategy, but was forced to pit with front-left bodywork damage on lap 68, dropping it out of the top 10.

To keep some cars going there was some paddock cannibalisation going on, as we’ve seen previously in the Dubai 24 Hours. This Focus was donating parts to its racing brother.

The lack of sleep was beginning to affect everyone – though some more than others… More rain was falling around the track and reports of crashes were filtering back, including the #44 Falken Porsche and a Vita4One BMW Z4.

Then came the shock news that the #19 Z4 had pitted just five laps into a stint and was being pushed back into the garage. The bonnet came off and the mechanics went to work at the rear of the car, seemingly investigating wheel alignment and brake problems. Could this be the point where the race passed into Audi’s hands? 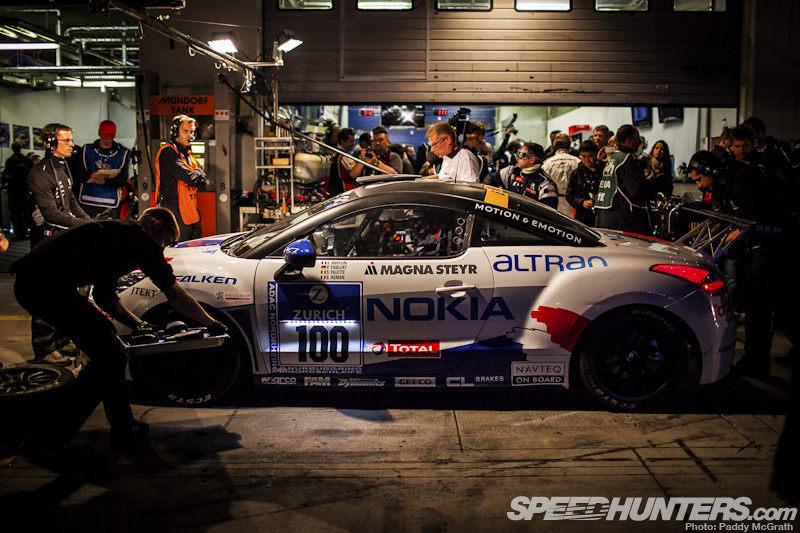 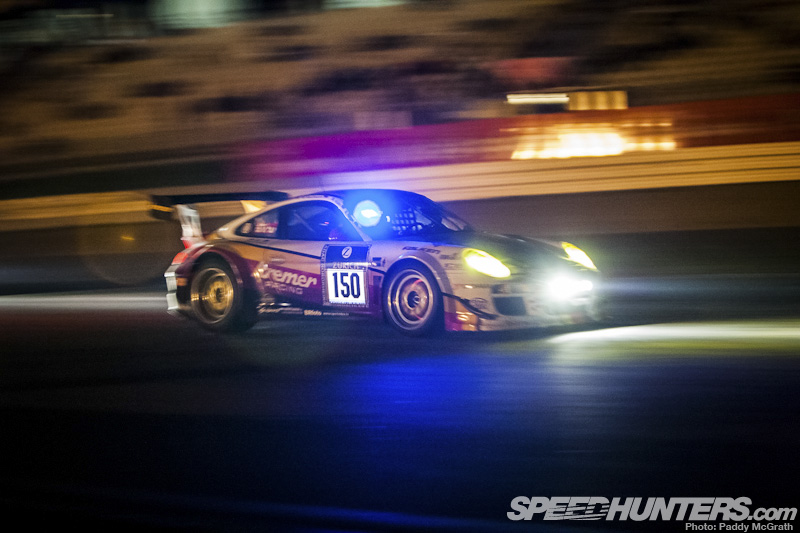 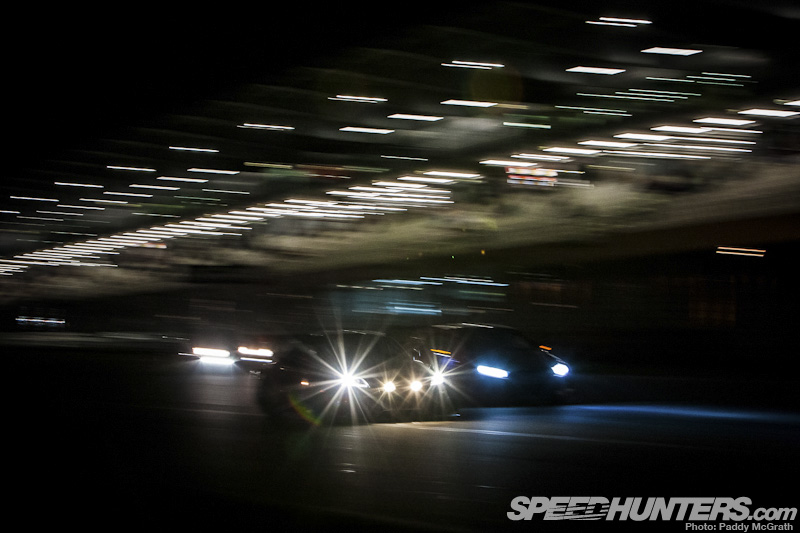 A Rare Look Inside The Toyota Gazoo Racing WRT Factory

3 WHOLE HOURS OF DRIVING? Not to sound like a typical redneck but NASCAR drivers drive for 12 hours in a race they do and they don't stop until the end. Sure they are "just going around in circles" but keep in mind... a NASCAR car isn't exactly easy to drive with it pulling hard to the left and you have to shoot it up close to the wall all while fighting the draft of other cars. Driving one of these cars that is made to drive straight and turn both ways would be like giving Tony Stewart (only nascar name that I know) a Bentley. Except sure you have to hit braking zones and whatnot. But to me it just doesn't seem as physically tiring to drive a GT style car.

@Lastspark Sorry but this isn't about NASCAR!

Driving 3 Hours of Nurburgring at NIGHT and in the RAIN???!!!!! You've got to be nuts to think that its "Not physically tiring"
You should really get into other forms of motorsports.

Also you should read the article. He did a double stint.Also looks at the time chart.See who has put in the most time?

Also which NASCAR race is 12 hours? They are usually 4-5 hours..

@Lastspark That's such rubbish all you've said there, NASCAR races are no where near 12 hours long! The fact you only know one NASCAR driver's name highlights your ignorance!

Hoping #20 BMW Team Schubert Z4 can win the 24Hr. It'd be a massive boost for BMW

At Daytona your doing 200 left turns an hour, where as Nurburgring is over twice that amount on left right turns.

Speedhunters Team had 4 drivers, if each had drove the same amount and had the fastest car that meant 39 laps each, 469 miles, 8 hours driving time, 2829turns. But some drivers had longer stints stayed in longer than others.

The panning shots at night are crazy, aside from the noise.

Are you guys still using the 5D Mk2 or have some of you guys gotten your hands on a Mk3?

@LouisYio Jonathan & I are using 5D2s, Rod has upgraded to a MKIII and it's a really nice camera. Sean uses some crazy device called a 'Nik0n' or something?

It was so dark in turn one that I often couldn't see the side of the cars as they passed, yet the camera could. Crazy stuff.