You never forget your first time. Whether it be your first drive, first kiss, first drift, whatever. It’s likely an experience that will stay with you for the rest of your life. When I stepped off the plane in Luxembourg Airport last Thursday, I knew I was about to experience something special.

What started as an idea in the smokey back room of a hotel in Oberjoch back in 1987, has become one of the most iconic hill climb series’ anywhere in the world. The Berg Cup (Mountain Cup translated to English) is one of those special events that we at Speedhunters live for.

The first major event of 2012 took place in the small northern township of Eschdorf, around 50KMs north of Luxembourg city. It’s pretty much your stereotypical, quaint European town. When I arrived on Friday morning, the entire town was all but deserted save for a few camping vehicles and tents pitched on the many small streets.

It’s worth mentioning that this isn’t ‘just’ a Berg cup event – its proper title was the European Hill Race Eschdorf and featured a host of other classes alongside the Berg Cup ones. I’ll go into further detail in the next post when looking at the cars competing.

As it turned out, I was a day early for the event. But this was a fortunate mistake as I got to witness first hand, the transformation of the town into a living, breathing motorsport mecca.

Slowly but surely, more and more vehicles arrived in the town to unload their cars. With no dedicated paddock area, the competitors set up camp on the roads and streets all around the town.

This particular area was still a public road, with traffic moving around the unloading cars as if it was normal.

An estimated 240 cars were entered for the event. That’s 240 cars with drivers, crews, family and their own personal cars and tow vehicles.

One of the things that struck was not only the sheer variety of cars ready to compete, but the quality of each build.

It wasn’t just a VW Group showdown, there were plenty of other marques represented like this 4WD Suzuki Swift. Its slick tires wrapped in plastic to protect them from picking up dirt and grime when being moved about.

Some had more sophisticated ways of unloading …

… whilst others kept it simple.

I’ll never complain about how low my front bumper is again – the cars of the Berg Cup would certainly give you a complex.

As you can imagine, there was a lot of support for local manufacturers. It was a BBS fan’s heaven.

The Audi 50 (which came before the Polo but was discontinued once the sales of the Polo exploded in the mid to late 1970s) and the Polo and MKI Golfs were amongst some of the more popular cars present. Simple, lightweight packages with incredible amounts of mechanical grip.

The humble Ford Escort was well represented too.

This very special Escort in particular brought a huge smile to my face. I’ll bring you a brief spotlight later explaining why.

As the day went on, the weather improved as I continued my search for more cars hidden out of sight.

Although the town is small in the grand scale of things, exploring it took time but nearly always rewarded you for it. By the time Saturday morning came around, all these isolated ‘paddocks’ would join together to create something very special indeed.

A rare look at some of the cars before their front aero packages are installed. Somehow, the term front bumper just doesn’t do justice.

Roman Sonderbauer’s Kadett would compete against Golfs, BMWs, Fords, Renaults in the Group H 1600 to 2000cc class, arguably the most impressive of the Berg Cup classes.

Although Sonderbauer would be in direct competition with Holger Hovemann’s car in the same class, you couldn’t tell by the friendly atmosphere in their pit area.

It has been a long, long time since I last seen a Citroen AX and this particular one made the wait worth while. It was competing within the 1300cc to 1600cc class at the higher end of the scale.

The course itself started outside Eschdorf at the bottom of a valley before finding its way some 1850 meters through the trees and finishing back in the town itself. The highest speeds reached were around 140/150MPH …

By the time Saturday morning had arrived, the rain gods had unleashed their fury and we would have quite a wet start to the action. I’ll be back tomorrow with the highlights from the Saturday practice sessions and a closer look at some of the cars.

Goodwood Festival Of Speed: The World’s Most Expensive Driveway Party 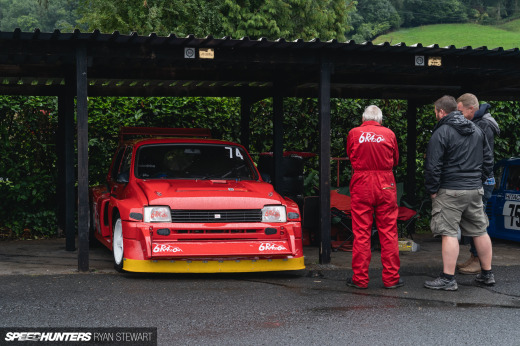 Great Coverage.
One edit though:
The one Picture of Humble "Escort" is an Opel Manta I believe.

@Renderbrandt Nope, it's a MKII RS2000 Escort with the 'cone' nose. Now that you mention it, they are quite similar.

I've lived there and the roads are incredible. Very narrow and smooth with a view worth takeing a quick look even on a stage

But I would'n have the nerv to drive on full power with my JZZ30...I barrely hang those corners with a Citroen Xantia back then. No way i could to this safelly with a 1JZ-GTE! Even with bigger brakes. I gues those cars havent got 1600 kg.....

The second I saw the first pic, I thought........Paddy McGrath. I've been a huge fan of Speedhunters for a long time and have to say that your images are instantly recognisable, and always superb. Keep up the good work Paddy.

@greenroadster The roads in and around this area are just incredible, no wonder there's such a motorsport following. I'd imagine something like a Caterham with some sunshine would be just an unforgettable experience here!

Paddy, we are Caterham dealer here in Luxemburg and 20 minutes away from Eschdorf...I could arrange you something

@YvesFaber Wow Yves, thank you for the offer! I'm not sure when I'll be back in Luxembourg again though. Will you be competing at the Falken Drift Demonstration at the Nurburgring 24HR?

I am loving this whole event

hillclimb cars are my favourite cars ever