Over the past several months we’ve ran a serious of guest blogs from Wes and the crew at Titan Motorsports documenting the build of a wild drag Supra.

Now that the car is complete, Wes and company are here to take us through the final stages of the build and the car being put to the test on the track. Take it away fellas!

With the initial build complete, we rolled the car out of the shop and snapped some quick pictures before loading it up in our semi and heading off to the track for testing.

Georgia Motorsports Park in Valdosta Georgia was the closest available track for a private rental, so the team loaded up and made the 3.5 hour trek up I-75. 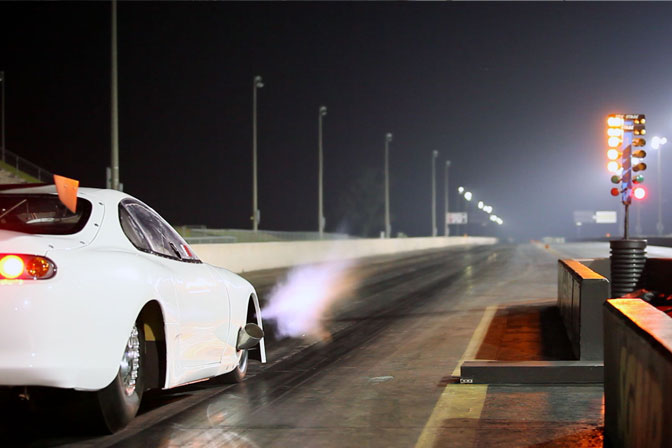 Our time frame for delivery was very tight in order to make the next race in Bahrain, so the car was air freighted to its new home.   While I’ve heard to cars being shipped air in the past, I was still amazed to see the timeframe.  The car left Orlando on a Thursday evening was transported by truck the 950 miles to New York, where it was loaded on a cargo plane and shipped straight to Bahrain. I was pleasantly surprised to see a picture emailed on Sunday of Ebrahim receiving the car at his garage in Bahrain some 7,500 miles way.

The car is raced at the Bahrain International Circuit, a beautiful facility that houses not only the local drag strip, but a Formula 1 track as well.

When the pass was completed the score board showed a 6.76 @ 327kmh (approximately 197.5mph).  This was a new record for the class, and put the car firmly in the record books as the worlds quickest and fastest Toyota Supra.

Coincidentally, Kanoo’s factory IRS car went 7.33@195.63 in the opposite lane making it the quickest IRS Supra in the world on the same pass!

Ebrhahim Kanoo and Gary White celebrate their 1-2 finish in the E.Kanoo Racing Toyota Supras in the BDRC Outlaw RWD Class.

The car has since gone 6.41 @ 212mph making it very close to the world’s quickest import title held by a full tube chassis Toyota in Australia. Check out the video here.

There goes another great Supra chassis.

We will miss you.

isn't bahrain where they kill protestors? why would you get involved in anything down there?

meh... I'll take Seafish's Supra any day over this.

Wow, is awesome! From Orlando to Bahrain!

6 seconds.. nice about time these cars cracked that time.

Holy crap most of you are ignorant.. World's fastest Supra is somehow a waste of a chassis, or just "meh?"

GTFO! Glad to see this car got the results its insanity called for

How many more Supras have to die for useless shit like this?

Yeah right Brombat, I don't see much of a Supra left. Stock cars and funny cars are just that: circus cars with no street cred! What impresses me? 1000+hp cars that come out to play during TX2K12...

UGR and this Titan beast are two totally different cars... This is impressive, no matter what anyone else says. One of the quickest and fastest import engined cars ever to run a dragstrip and people are saying it's not impressive... The guy's other IRS Supra went low 7 at over 195 mph... Seafish can't touch that, not even close

Props to Titan Motorsports... should do well in the future with customers like these and their deep pockets.

Another tuned by Shane T car in the record books.

This is not a supra

I can't pass this one. Watched the blog when they were building it, and saw that they made 6.4 seconds. Jesus, it's incredibly fast, they spent all the money for the right purpose.

To those "i_dont_own_car_but_they_broke_it" - get the hell out of here. Here is a perfect exam of great engineering and tuning and some retard says - "meh? I miss the chassis?"

All those customers complaining of stolen parts and their own cars getting destroyed should just shutup! AWSOMEE TITAN!!

Mdeezy- the driver of that car daily drives a supra that made over 1k to the rear wheels.

Its amazing what those middle easterners can do when theyre not strapping bombs to their kids.