Let's go ahead now and jump right back into my exploration of the 2012 March Meet at Famoso Raceway.

Starting us off we have another example of the ultra-popular Chevy Nova drag machine. It's a simple combination of light weight and huge aftermarket support that's made the Nova a drag strip favorite over the last few decades.

No matter what the generation, you'll find big-engined and big-tired Novas populating dragstrips at every corner of North America.

But there is of course an even lighter Chevy available – the Vega. Originally introduced as an entry in the compact car wars of the '70s, the Vega quickly found itself in the hands of drag racers who shoehorned in all sorts of V8 engines.

Back at the swap meet now, we have an incredibly awesome NASCAR-bodied go kart. Seriously, what kid wouldn't want this? I'm a "grown up" and I still want it. 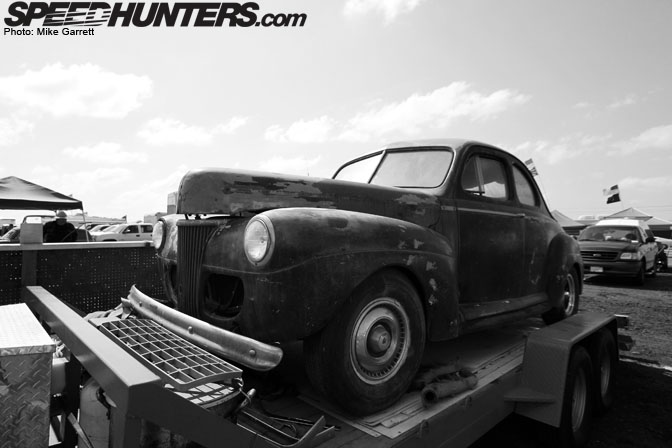 If you could get your hands on this Ford Coupe how would you build it? One of the fun questions that comes to mind when you see a blank canvas project car for sale.

If so inclined, you could also pick up a complete selection of parts for your new project.

Is that sufficient patina?

One of the more unique project cars up for sale was this 1950 Crosley Wagon.

Again – would you leave it stock, or build it into a quarter mile monster? Maybe you could even turn it into something else completely off the wall?

Perhaps there's a way this 325 cubic inch Dodge Hemi could be wedged into the Crosley?

Here's a car I can't recall seeing at Famoso before, the Wildcat Auto Wrecking Dodge Lancer.

Wildcat Auto Wrecking is an all-Mopar wrecking yard located just outside of Portland, Oregon. I had the opportunity to visit years ago and it's quite the place if you fancy Chrysler products.

The Lancer is powered by a 383 Mopar big block (of course) and the dual quads popping through the hood lend a mean retro look.

I think my favorite element of the car were the two-tone rear wheels. It's a neat retro touch, and they look pretty trippy while in motion.

The Moon Tank. As American as apple pie.

Drag cars might have an image of being rough around the edges, but many like this Callenger were sporting show-quality details.

Are narrow, tubbed rear ends the anti-thesis of Hellaflush?

Can you spot the 1923 Ford Model T roots on the body of the Tocco Harper Garten car? I can't.

The blown big block Chevy once powered the car to an all-time best ET of 7.21 at the original Irwindale drag strip.

This Roadster was a member of the Hot Rod gang that had gathered under the timing lights. So raw.

Another example of vintage hand-lettering. You might remember I explored this a bit during the 2011 California Hot Rod Reunion.

One of the most talked about vehicles in the car show was this '47 Ford Pickup that came all the way from Appleton, Wisconsin.

It had the style of a vintage drag racer, with the details of a show machine. From the white interior…

…to the immaculately finished engine bay.

Just another one of those amazing builds that pop up at events like the March meet.

I'm going to wrap up this post right here, but we'll be back with more from the March Meet tomorrow…

…including some of the scenes Larry captured trackside. I'm sure the beating his ear drums took was worth it.

Great stuff! Would really love to hear these beasts leaving the line.

Ahhh, the two Nova's up top make me miss mine...

If my eye is correct, that Camaro on the bottom is from the Portland area. 175 mph in the 1/4 at PIR with out the juice all the way up and an 'old' motor.

Why are you complaining about your darn low gasprices, filled her up today for 10.05usd/usgallon. Welcome to Holland.

Diggin the Lancer. Looks like an AP6 here in Aus.

quality content.. pity we don't have some Video Roll for some of these! i'd want the Wildcat Auto Wrecking Dodge Lancer to fly 'round a track for a few hours - Thanks

I just want to point this out before any Chevy fans start flaming... 383 was a stock block displacement for Chrysler products in the 60 & has nothing to do with the chevy 383 & The chevy 383 was (is) a stroked version of the 350 & was not developed till after the mopar 383 was retired... sorry but as a die-hard mopar muscle fan it really bugs me when they ask "Why did they put a chevy motor in it?"

Even with the wire wheels, i think that might be my new all-time favourite roadster. Literally almost choked on my cup of tea when i saw it! Got any more? Also, got any more pics of the coupe rod with red trim lurking in the background of photo 6? Please? You NEVER answer my requests... humour me this one time, Mr G!

any more pics on the Black, chopped, red panhead engined car in the back ground of the black car with a white gril and scallop on the side Mike

Love the 'Wildcat', never seen wheels painted 50/50 like that! cool vintage dew can in the 47 ford also.

Nice coverage Mike - but you Yanks and your blasted pick-ups. Stop complaining about what you consider high gas/petrol prices. You guys are paying less than half what we do in Australia and even less than a quarter of what they pay in Europe!