I'm hoping you guys are enjoying my little journey into Japan's hobby and toy scene. Even if you don't consider yourself at JDM maniac, the passion that the Japanese have for this stuff is very universally respectable. This doesn't apply just to scale cars, but to robots, trains, monster figures, and just about everything else. The country is an absolute paradise for hobbies.

Continuing where I left off last time, I'll use this post to share some of my finds from a few different stores in Tokyo and Osaka.

Tokyu Hands is one of Japan's most well known "lifestyle" stores. While in the hobby section of the Shinjuku branch I found this series featuring 1:64 scale Calsonic race cars.

Both the Super GT GT-R and the Group A R32 are represented in the lineup.

Looking for something uniquely Japanese? How about an RC kei truck? This was found at a Don Quijote store in Osaka.

A radio control hand dolly? Strange, but I suppose you could put it to work hauling things around the house while you lay on the couch…

Just outside of Ueno Station in Tokyo you'll find the seven-story Yamashiroya toy store. It's a fine place to get your Tomica fix, or to pick up a variety of other car collectables and scale models.

Can anyone spot their car among this bunch?

I'm not sure if this Tomica car ferry is seaworthy or not. I'd like to load it with cars and test it out in the bathtub or swimming pool.

Thanks to Tomica, kids (or strange adults) can create an entire miniature city to cruise their diecast cars around. Need a rice ball or can of Boss Coffee? Drop by the Tomica Town Seven Eleven.

Want to rent a Honda Fit or Mazda Demio? Nippon Rent-A-Car has you covered.

Want to buy a CIvic Type-R? There's the Honda dealership with a rotating display floor.

They even have an Autobacs store complete with a working car lift. I can't speak for other countries, but I know US toymakers don't really offer this sort of thing today. I would have gone crazy for these kind of things when I was a kid.

More vehicles from the Tomica Vintage collection, with models ranging from the '50s to the early '90s.

The detail on these things is incredible for their size.

It gets even better though. This version of the Tomica DR30 Super Silhouette has to be one of the most detailed 1:64 cars ever. It even includes a scale version of its famous driver, Masahiro Hasemi.

It seems that buses actually have quite a following in Japan. Besides these diecast models and toys, there also a few magazines dedicated to them. Anyone up for Bushunters.com?

Over the anime goods section I found this cool model of Lupin the Third's Fiat 500.

Based on my observations, classic cars seemed to make up a huge part of the model selection. No complaints here.

Aoshima's Kenmeri 2000GT-X kit can be built with copious amounts of negative camber.

Seibu Keisatsu kits are sure to be popular among classic car fans and the generation of people who grew up watching the show on TV.

The completed version of the Super Z with gull-wing doors, machine guns, and not so subtle Nissan branding.

I quite liked these scaled down model kits.

Remember Tokoro-san's customized Subaru 360 I spotted at this year's JCCA New Year Meeting? There it is in plastic model form.

I couldn't leave out Choro-Q, could I?

Like Tomica, Choro-Q has been adding lots of vintage models its collection. Japan certainly appreciates the classics.

Time to wrap up here. I'll be back next time with some investigation of the mind-blowing Yodobashi store in Akihabara. 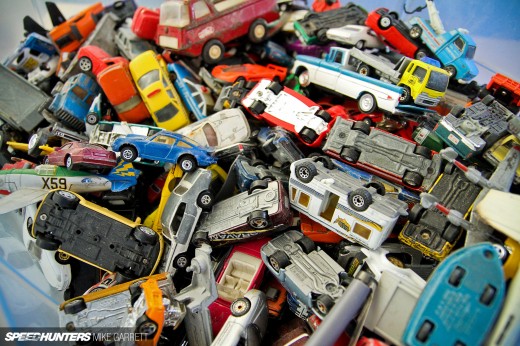 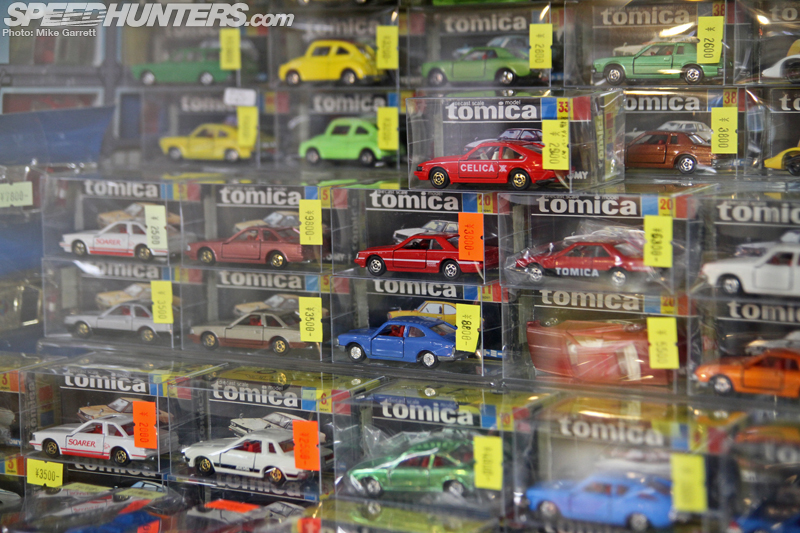 I wish i lived there, all the tamiya plastic kits i could own!!

When are you guys gonna make Speedhunters stickers for a 1:10 drift rc?

i bought that Hakosuka when i was in Japan ! Still on the shelf tho

Tomica has been available in US via ToysRUS for about a year now. Thought the selection is small compared to Japan, there are still lots of good stuff. Check it out.

I had that Fujimi "NEW BMW" 3-series kit when I was a kid!

Tomica town modelks were available by that company ^ here too, but after a year they stopped import them because no one bought them. It´s a shame, but typical for Europe!

A very cool kit from Aoshima.

(Hope to build it soon).

I agree, Japan is really paradise for my hobby (scale cars), all you need will find there! great topic:)

For a second I read "BUSHHUNTERS.COM" ..i think that one's taken

Would love to have more Tomicas here, they're just too much $. Got an NSX in my Tomica collection.

I could spend so much money there

With the high cost of gas recently, I started to get back to radio controlled cars. I just got a Tamiya Tom's 84C (RM-01). Tamiya quality is on another level compared to my Associated 18R. Wouldn't mind seeing some of the RC cars available in Japan.

I want to have everything! Especially those kits on the first picture. KPGC10? Mazda Savanna? Skyline GT-EX!? HHNNNNG

An R/C Hand Dolly is definitely something only Japan could come up with.

A little piece of heaven...

What a great story. Made my day. Thanks Mike.

I want that yellow Carina with quad headlights..

Yodobashi Camera. If you'd never been, you might hear the name and imagine a quaint little Japanese camera shop tucked away on a side street somewhere. In reality, Yodobashi stores are much more than just camera shops. In fact some are more like small

wow small cars i Love it