I’m certain that any of you familiar with the World Rally Championship will recognise the name ‘Kris Meeke’. Asides from being the 2009 Intercontinental Rally Champion, Meeke made his WRC debut last year behind the wheel of the new Mini JCW WRC and scored his first WRC points at Catalunya. Before his rally career went into overdrive, Meeke tried his hand at drifting at the opening round of the 2008 Prodrift Series. Behind the wheel of the WKD Imports RPS13, Meeke, who had never drifted before, quickly got to grips with the sport. Speaking to him on the day, he told me how almost disorientating it was – where he would normally slow down, the drifters were going faster – it was completely counter-intuitive for him. It’s not very often you see a WRC star behind the wheel of an S-body! Here’s hoping that Kris picks up the drive he deserves in 2012!

A Rare Look Inside The Toyota Gazoo Racing WRT Factory 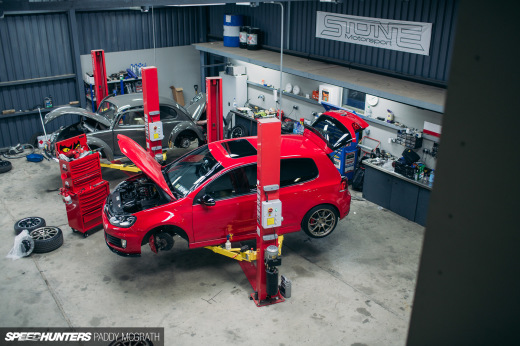 Project GTI: All The Small Things

Rad, Meeke is an awesome driver. What a shi tty thing BMW/Mini did with him! He was there from the beginning, developing the car! I guess things happen but I hope he does get picked up!

How much is that nissan pushing