Just the other week I had a meeting with some of the Streetgasm folk. The guys in this group come from all walks of life and it shows in the diversity of cars they own. Maurice, the owner of this gorgeous R34, is what you could call the team captain. 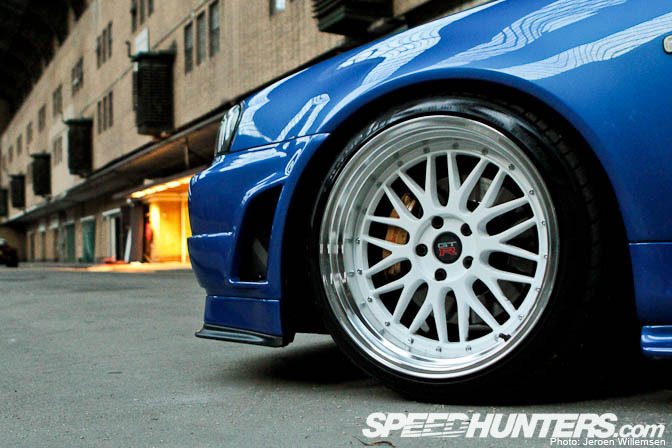 This R34 is still a work in progress, which is why I've tagged this as a ‘builds' feature. When the car is finished I'll have a full feature that includes a review of its driving capabilities.

Maurice and I made our way to Pro Import where their main mechanic Kevin was working on the Skyline.

Here is Maurice awaiting the first startup of the car after several months of silence. He went from a twin turbo setup to a big single Holset/PI T75RR turbo.

So that we could take the GT-R out for a short photoshoot, Henk Go – the other half of Pro Import – did a quick, safe tune on the Haltech ECU.

When you pop the hood you are greeted with this awesome NUR based RB26. I won't go into all the specific details just yet because there is a lot more coming.

This is the Holset/PI T75RR turbo that now dominates the engine bay.

The GT-R is fitted with a screamer pipe that dumps straight to the atmosphere. I can't wait to hear this car on full boost!

The only problem we encountered while driving the car was the fact that it is, of course, right hand drive. This meant things like opening boom gates weren't exactly straight forward.

When we arrived at Pro Import there was a little surprise in the form of this awesome Audi R8 V10 Spyder. We didn't expect it to be there, and I'll have more photos of it shortly.

Stay tuned for more on this Dutch GT-R in the near future!

Sooooo sick. And more to come!?

I'm not a fan of the rims. It's the color. White rims look good but it only works with some rims imo. The car is still badass though.

look forward to seeing it finished.

That weld is nasty

@yorick, why the F&$% would u keep it stock why the hell are you even on this site? Doesn't look any better? its not even far from looking stock u f*&%tard.

@Yorick. So a functional lowering, a carbon hood and a nice set of wheels (BNR34 Stock wheels are ugly as sin) make it look worse? You sir, probably get off Speedhunters if you are interested in seeing stock-bodied cars.

What wheals model? SSR or BBS?

what rims are those?

i really like them, would go different colour though.

What model is the Black car in the garage photo? I don't recognize that rear end...

Pretty sweet car. I hope they keep the RHD setup.

Very different choice of rims for what you normally see on a GTR but it still looks great and unique.

I'm digging this! Looking forward to the full build.

This car has the look of a Mei Long Dragon...

Black one is an R33 Sedan/4-Door Skyline.

Every ones a critic.. The car looks amazing an the photos do as well. Great "mini feature!"

Soooooo.... How ugly is that merge on the hot side pipe from the turbo?

beautiful, just leave the body mods off from now on, it looks good as is!

Thanks Jeroen for this fun Build feature ! Cant wait the full feature

New car again? What kind of work do you do?

Yeah, what is that Black car? it looks like a 180sx rear light, but the 3rd brake is too long and the key hole of the rear trunk should be on the bottom for 180sx

and the black one in the garage is a 4door r33 gts4 with gtr engine.

id take that skyline over the R8 any day!

it's a cool car.. and pretty quick aswell..

great guy that owes the car..

I had never thought that Pro Imports was so close to my house,,, I always went to Jappower which is much farther away, thank Jeroen! I'll be heading there tomorow! Nice Post!

wouldn't mind seeing a 'thrown-down' between the R8 and this beauty.. just for devilment sake..

One beautiful piece of machinery

People who get bent out of shape over some differing opinions don't belong on any site or forum PERIOD. Get over yourselves and just enjoy the article on this car. I personally don't like alot of things on it...why do u care?

varstoens, comon what's with all the features with cars and fake wheels...i thought this was a real tuners website.

I Thinks those are BBS.

Is this site just to give fucking annoying comments? Go cry somewhere else!!! ... I love this car!!!

Wow, it's amazing how many otherwise nice cars end up with shitty, knock-off Varstolen wheels. Why cheap out on the parts that your life rides on, especially on a car like this??

Absolutely Sweet Ride !! big fan of the R34 GTR when will part 2 come ?

Good to see someone featuring european cars, instead of the trailerbitches from usa

In my opinion, a proper Skyline should ALWAYS be rhd.

Check out this Hotwheels replica!!