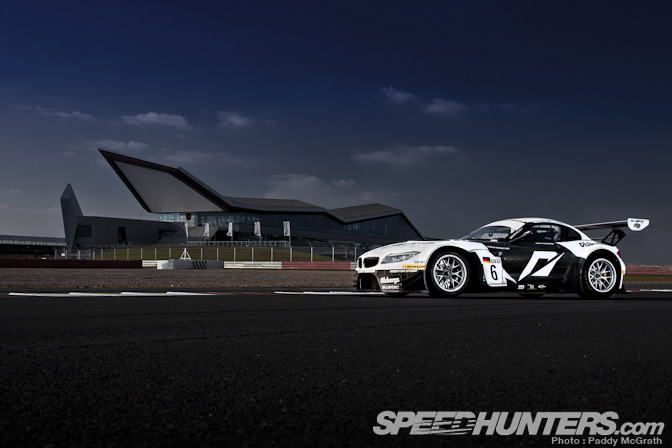 Picking up where we left off in part one, our season was now in full swing. From the humble – but rather amazing – Irish Touring Cars one weekend, to the might of the GT1 and GT3 grids the next at Silverstone. Rod had requested that I travel to the UK earlier than previously planned to shoot the NFS Z4 GT3 car for a print feature in Performance BMW magazine. There was quite a lot of red tape involved in arranging this shoot – permission to shoot on the circuit was sought first, followed by arranging the details with the team and organisers and then getting permission from Race Control to allow the car to be towed out of the pit lane in the wrong direction. The cars aren't allowed run after specified times so two of the Schubert crew had to tow the car into position with a quad. The reward for our effort was more than worth it.

Shooting GT1 and GT3 usually proves to be the highlights of my year. The cars, sounds and backdrops all come together to create a fabulous environment to work in. 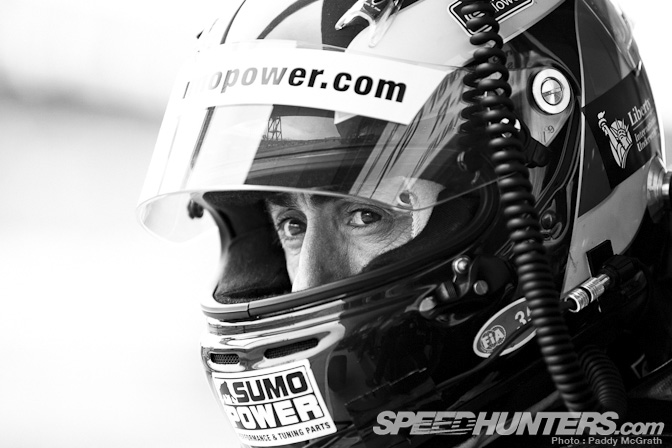 Part of my brief for the weekend was to photograph David Brabham for a 'day in the life' story which we ran after the event. It was an absolute pleasure to work with David, he was nothing but a gentleman. 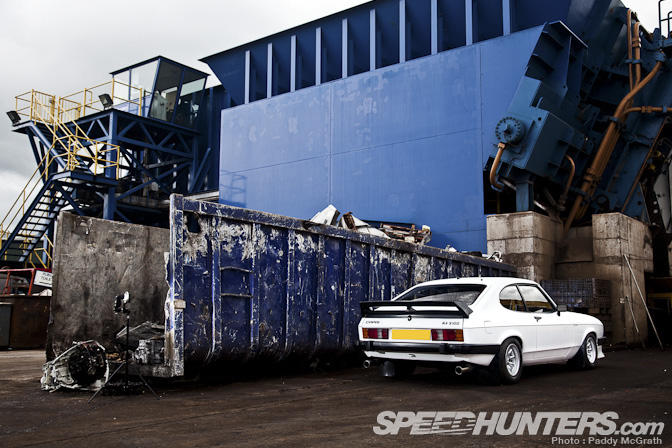 Another weekend and another journey to Northern Ireland. This time to shoot this splendid RS3100 Ford Capri. 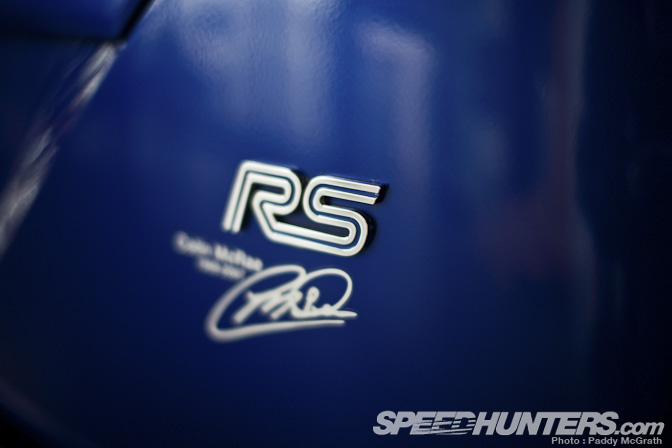 I didn't even have a chance to charge my batteries from the previous day's shoot when I was already back out the door. This time for the RSOC meet at a local Ford Dealer. 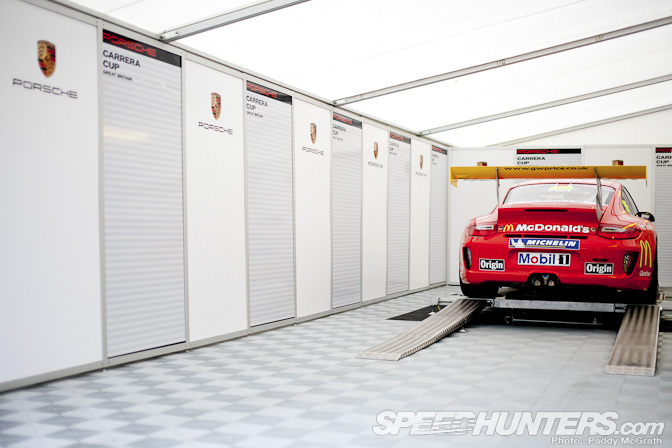 Three days after the RSOC meet, I was on my way to Frankfurt airport to liase with the rest of the Speedhunters crew. Our destination was the Nürburgring for our annual pilgrimage to what is surely the toughest endurance race on earth. 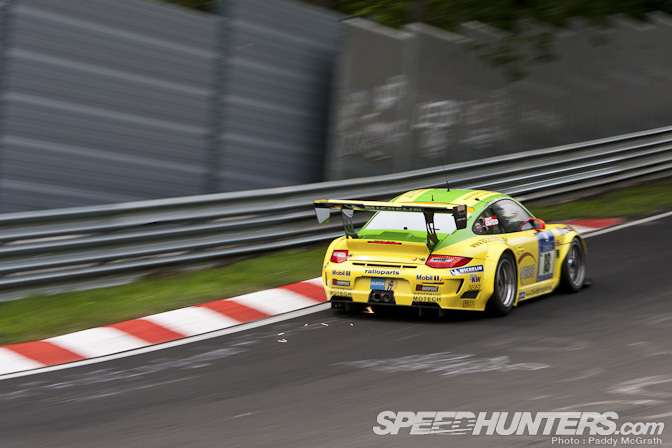 This was my second visit to the 'ring, but the first time I visited the village of Adenau. It's so surreal to walk the main street with race cars thundering past overhead. 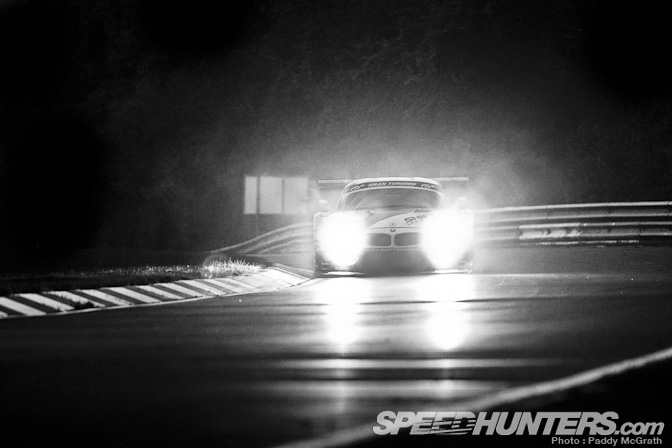 Before the event, I'd identified a couple of spots I wanted to shoot from and Hohenrain was one of them. At the end of the Dottinger Hohe straight and where the Nordschleife meets the GP circuit, the cars are travelling towards you at incredible speed. Trying to balance the exposure against the glare of headlights was pretty tough and this shot needed some burning in post to bring back the car. 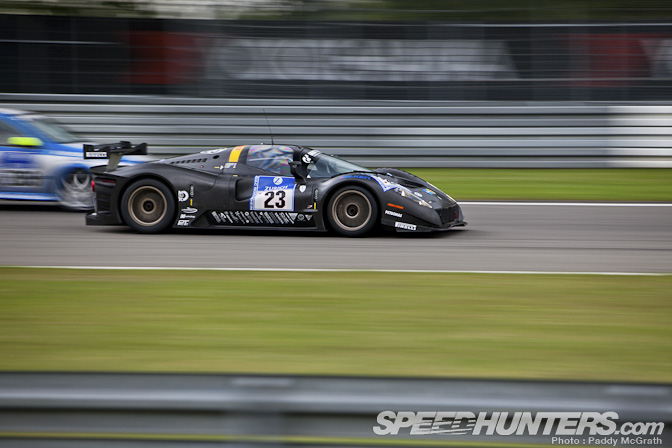 For a change this year, I spent a lot of time shooting the GP circuit. I've always thought that the GP portion of the behemoth is often and unfairly overlooked. It's an incredible place to shoot in its own right but is completely overshadowed by the Nordschleife. 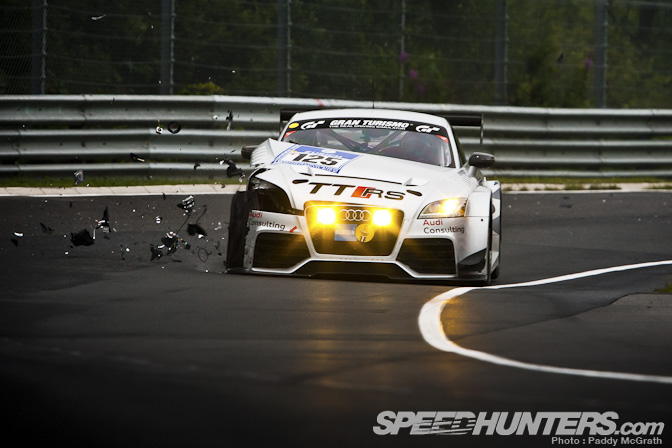 Capturing that moment always involves a little bit of luck. I heard the sound of a delaminating tyre before the car came into view so I was ready for it. Once it appeared, I unleashed the 1D's burst and watched in awe as the tyre exploded and took the wing and headlight amongst others as its victims. 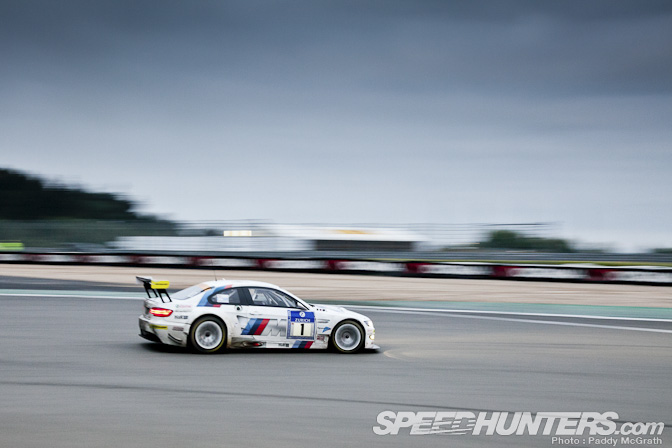 Shooting a twenty four hour race is an exhausting yet strangely invigorating experience. I had pretty much zero luck shooting at night this year. I attempted to make my way to Pflantzgarten after the sun had set but between waiting for a media shuttle and said media shuttle getting stuck in a three hour traffic jam, the driver's shift then ended around two miles from the turn and he had to return back to the paddock. With a looming deadline, I had to retire to the media centre in the middle of the night to prepare a story for you guys. The sun was already creeping over the horizon when I hit publish, so I was beaten by the night but was determined to boss the final shift. By the time the above shot was taken (05:21AM going by the EXIF) the Speedhunters team had been awake nearly twenty four hours already, yet the race still had over ten hours left to run. 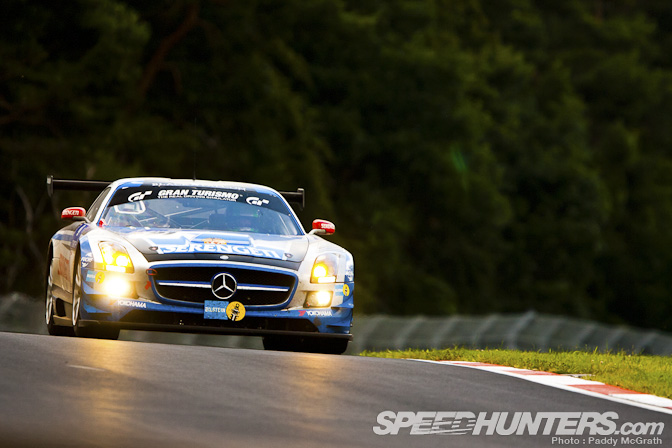 Anytime you need to make your way out to a section of the Nordschleife, it takes a lot of time and energy. I was heading out to the fox hole to grab hero shots of the leading cars, in anticipation of the flash result that we would run once the cars crossed the finish line. I usually find that I'll walk a distance but always looking back at the track to see if there's any good shots to be had. From the marshalls post just before the famous Aremberg corner, the cars would almost magically rise from behind the crest before blowing past at speed. The super clean shots that resulted were amongst some of my favourites from the entire year. 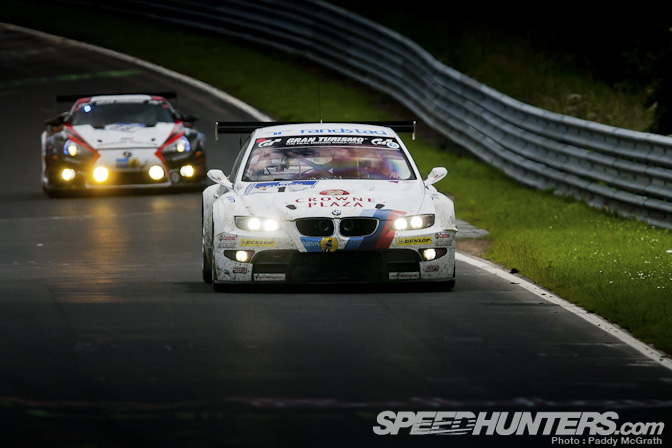 Towards the end of the N24, the media shuttles stop running from around noon. This left me pretty much stranded at Aremberg with a long, long hike back to the paddock. From Aremberg, I headed back towards Flugplatz, down to Quiddelbacher-Hohe, back up to Hocheichen and from their to Hatzenbach but always looking at the track and trying to identify a good shot. With the sun trying to break through the clouds, I waited for the cars to break into the patches of sunlight in order to highlight them from the pack. This shot of the #1 M3 GT was my personal favourite. The LF-A was an added bonus.

I still feel that the 'ring kicked my ass this year but have no doubt, I'll be back next year to try and tame her once more. 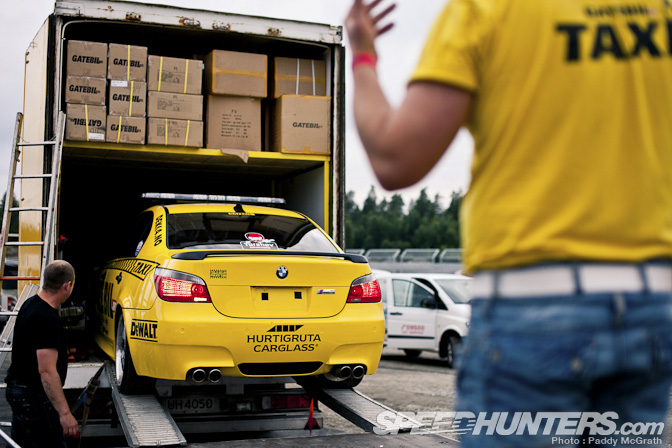 From Germany to Norway and from one insane event to the next. Gatebil has been an event that has eluded me for many years. 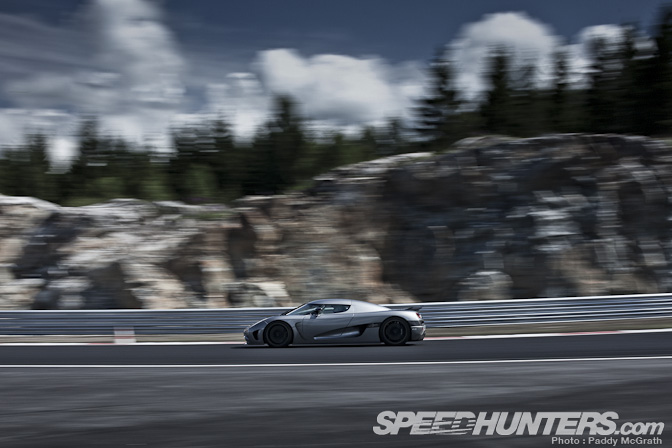 The course at Rudskogen is simply incredible. Julian Smith called it all the best parts of the Nürburgring compacted into one place. I think he's right. 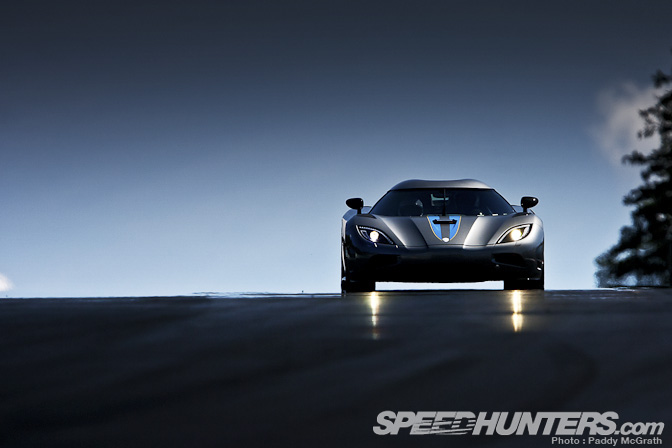 Shooting the top of the hill as the cars thundered over was another one of those moments. Bliss. 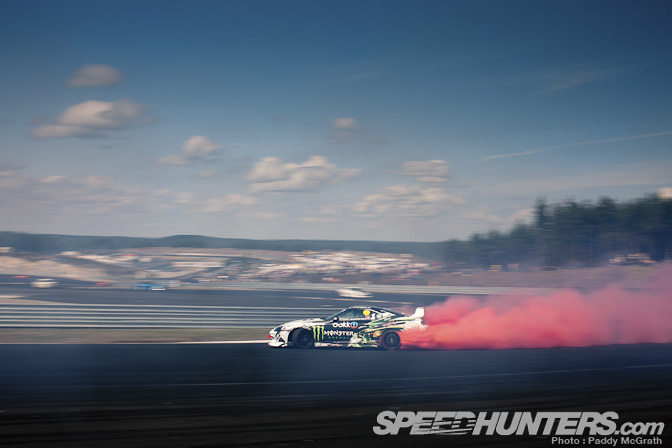 Kenneth Moen pinking out the first sector of the new Rudskogen course. It was pretty tough constantly shooting through a screen of tyre smoke. 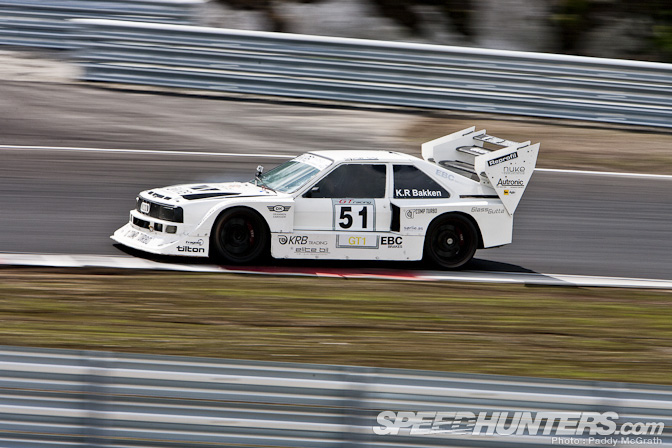 One of my highlights from Gatebil was shooting Kai R. Bakken's Audi S1. It sounded every bit as amazing as it looked. I just wish that photographs could capture sound. 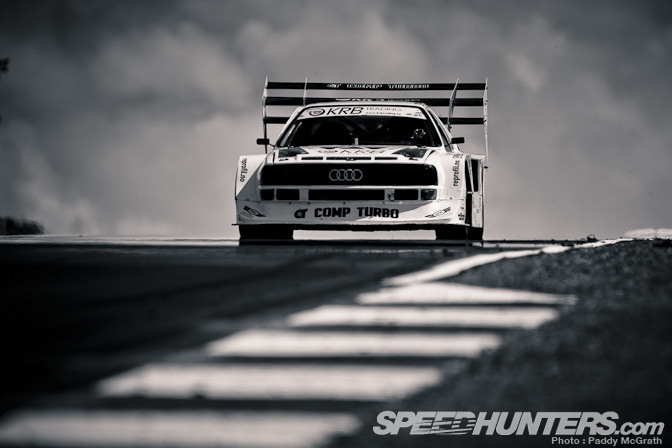 I couldn't resist grabbing a similar shot of the Audi like the Agera one above. This time though I moved further up the hill to try and incorporate the kerbing into the shot. 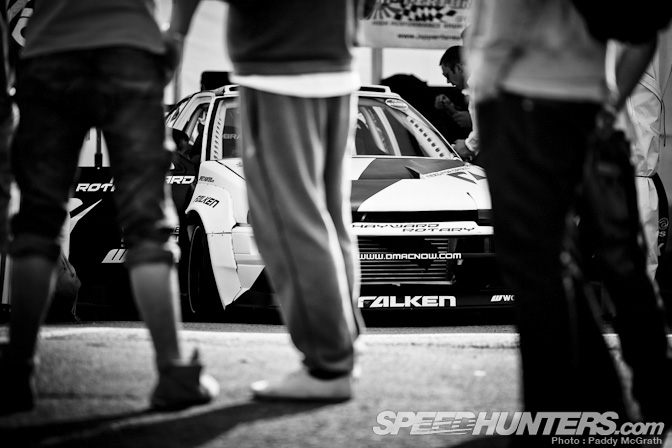 Awesomefest whilst awesome, was difficult to appreciate after coming immediately from the N24 and Gatebil. It was the official first outing of the D-Mac '86 and I don't think any of the team could have expected such a positive response from the public and other competitors.

The Look of the Irish

You don't need to capture sounds with pictures... I can hear that Audi PERFECTLY.

Hey Paddy, I have to ask. What are the biggest differences between your 1D and 5D?

Awesome shots, I love these! I second Dan's comment, lol.

The picture of the Audi blowing a tyre is fantastic... As a driver, if you should be unfortunate enough for your tyre to blow out with that much destruction, you WANT a photo like that of it... I really hope that the driver/team bought a print of it at the very least (it is much more interesting than the normal pictures you often get after an event).

I think this is my fav set of photos of the year so far. Great stuff!

you need to release some of these pictures as desktops!!!!!!! cmon its christmas!!

I love the colours

Excellent stuff Paddy, look forward to your coverage next year.

I use the 1D for any heavy on-track work due to its build quality, 8.5FPS, amazingly fast autofocus system and again, its build quality. These are seriously tough cameras. The 5D I use as a backup camera when on track but it becomes my main camera when shooting the pits / paddock or any static car events and feature shoots due to its full frame sensor and 22MP resolution. It's also an amazing camera at high ISOs so is particularly useful in low light situations where you don't want to use a flash.