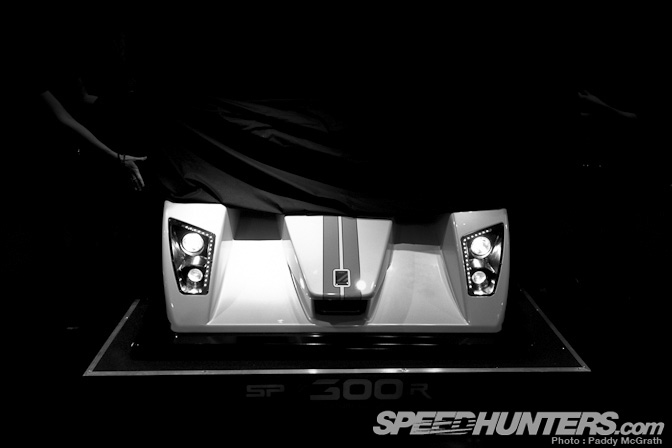 It’s pretty hard to believe that we’re already looking back at the twenty-eleven motorsport season. Although the respite in travelling and epic workloads is welcome, I’m already missing the action. Since you’re reading this, I’m sure you can relate. My only regret from 2011 is not taking the time to take things in. I’ve had the honour of visiting and shooting some amazing events this year. I’ve met some pretty incredible people on my journeys and have plenty of stories which I can probably never share in public. 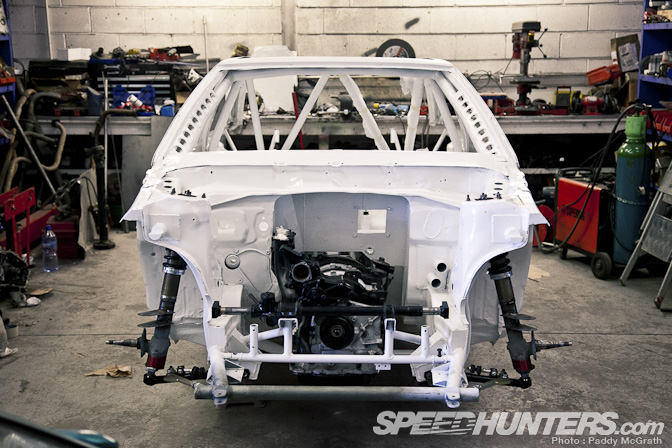 I know there are a lot of you out there who are interested in photography so I’m going to try and gear these particular stories towards you. I’ve included the EXIF information for each photograph but I wouldn’t get too hung up on the numbers. I’m no where near the standard of photography of some of the others on here but I’ll do my best to try and talk you through each shot and the circumstances surrounding them.

Documenting the build of D-Mac’s ’86 was surprisingly quite challenging. The low light of the MCNSport workshop meant working with high ISOs and trying to figure out fresh angles and viewpoints for each visit was tough. 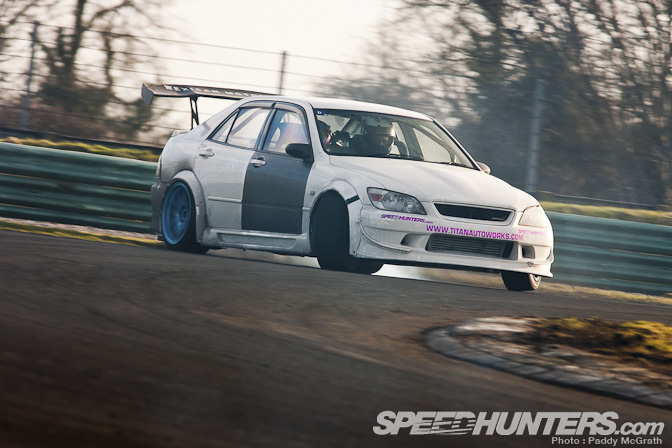 Witnessing the Wexican Altezza roll out of Mondello’s pit lane for the first time was one of my favourite moments of 2011. Watching it smoke out Mondello Park on its first runs made the moment even sweeter. Shooting 1/100th at over 400mm focal length (536MM effective once crop factor is accounted for) drastically reduces your chances of a sharp shot. You need to be patient, stick with it and most of all practice. 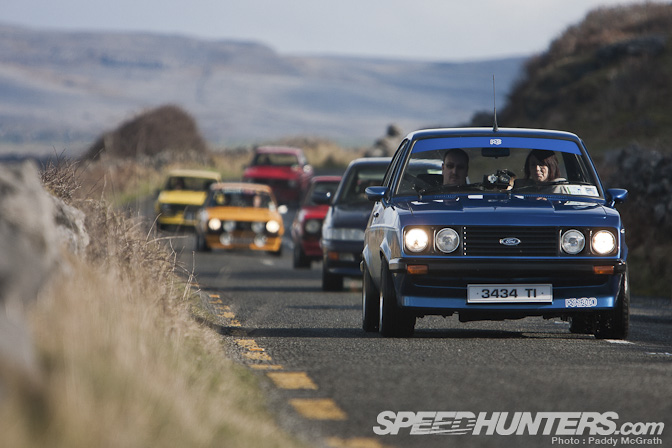 I was asked back in March to shoot an event for Classic Ford magazine which involved chasing 30+ Ford Escorts along some of the most scenic routes in Ireland. The weather just about held out and gifted us with some amazing light. Overtaking the full convoy to get up the road ahead of them provided some interesting moments … 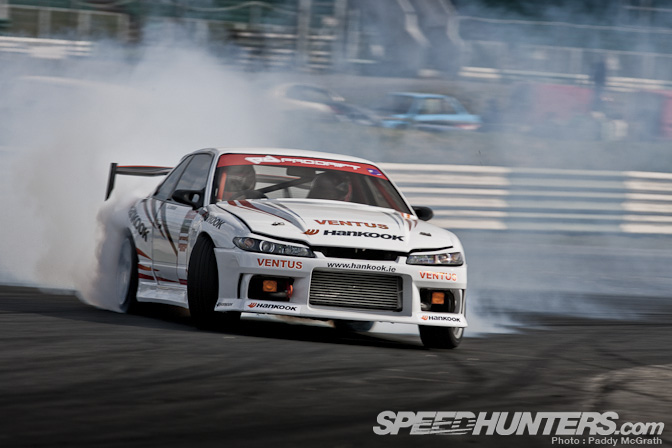 I love the drift practice days at Mondello Park. They’re not only a chance for drivers to test new setups and parts, they’re also a chance for photographers to hone their skills especially after a quiet off-season. I spend a lot of time watching the cars to try and identify the point which best displays their aggression. 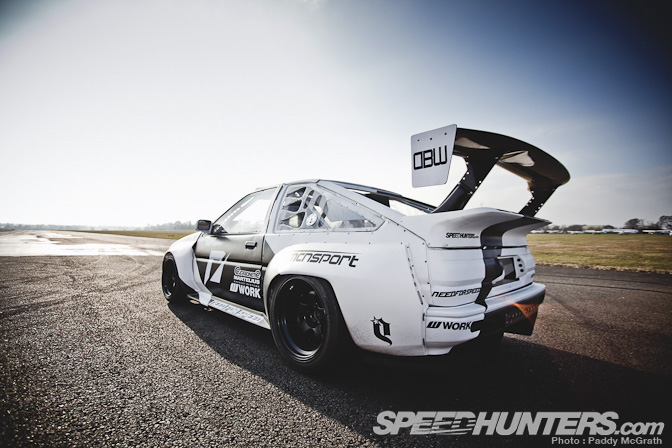 This shot from the Irish launch of Shift 2 Unleashed ended up on the cover of Japanese Performance magazine. Although shooting into the sun is considered a taboo by some photographers, I love the burst of light and harsh shadows. 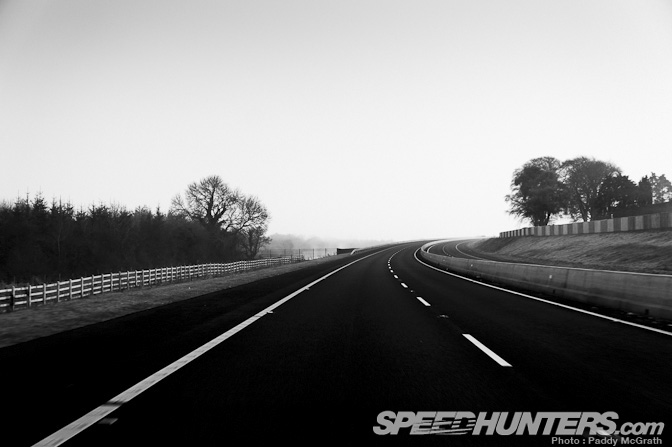 Most of my year has been spent in the driver’s seat on the road to somewhere. I love driving and especially the peace and tranquility of having the open road to yourself that it brings. I always keep a charged P&S camera in the car as you never know what’s around the bend. 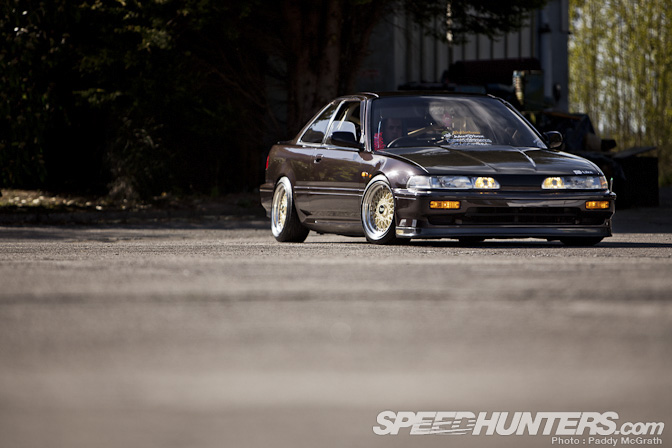 2011 has been a hit and miss year for my photography. I’ve been feeling pretty unhappy with my work and I’m struggling to find my own style. Shooting Darren’s DA Integra was a back-to-basics exercise – No flashes, filters or zoom lenses. Just a camera and a prime lens or two. 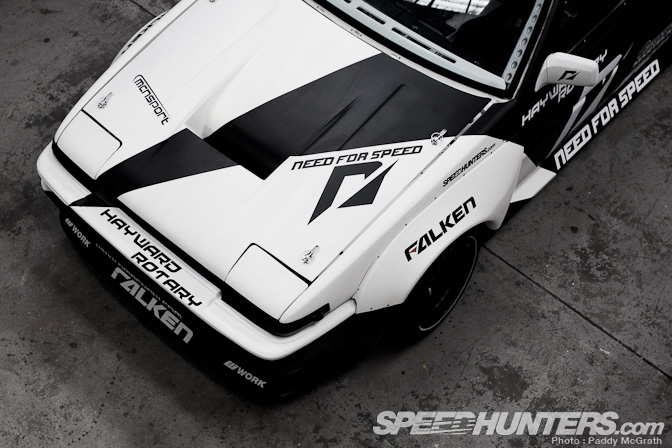 The feature shoot of the D-Mac ’86 was turned around in a pretty remarkable amount of time. With Darren away on Formula D duties, Happy (Darren’s mechanic) and myself took to working every possible angle we could get of the car. Going into the shoot I had prepared a check list of shots I needed to ensure nothing was missed. 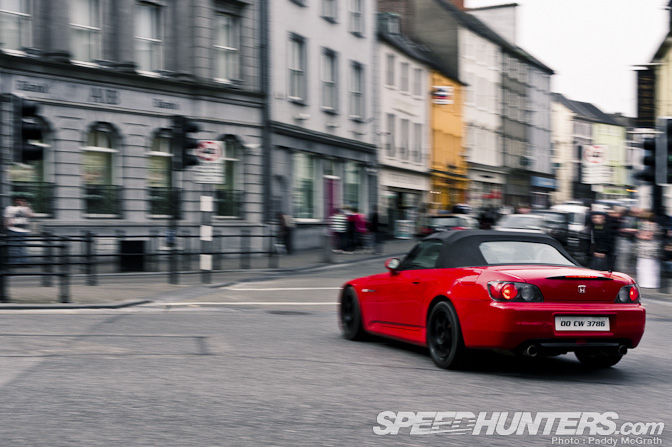 Another example for why I always try to bring a camera with me everywhere I go. From the instant I heard the distinctive VTEC engine note, I was fishing the camera out of my pocket and just about caught this Advan wearing S2000 before it vanished into the traffic. 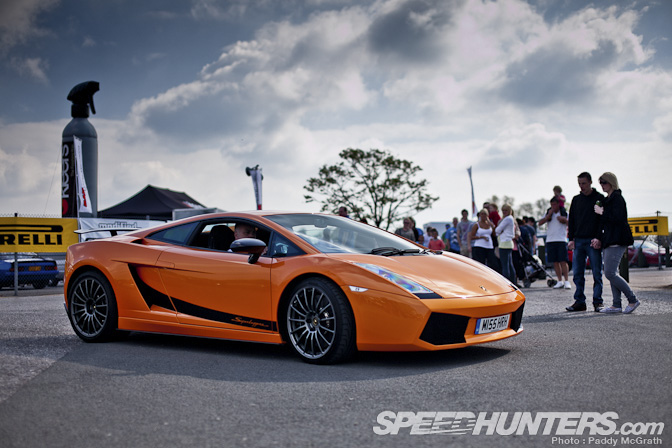 I love exotics. Even more so, I love people’s reactions to them. The fact that a piece of metal can stop so many people in their tracks and leave them open mouthed is just amazing. I pray I never get to a stage where this becomes ‘just another’ Lamborghini. Shooting relatively wide open (the Sigma lens doesn’t like full wide open) helps separate the car from the background. 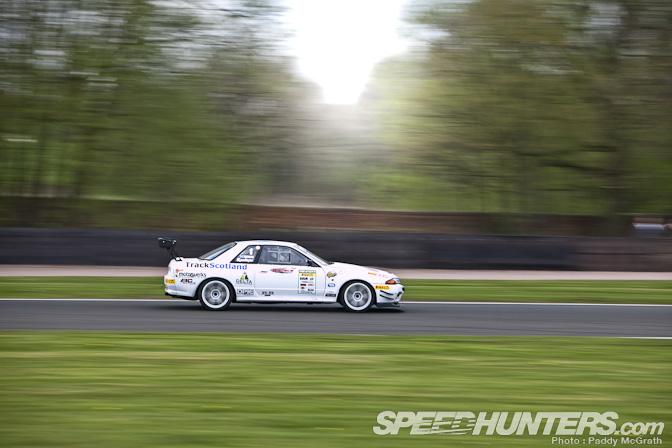 Panning is a skill set that I need to exploit more. I always find it a struggle to find a nice balance between slow and fast shutter shots. 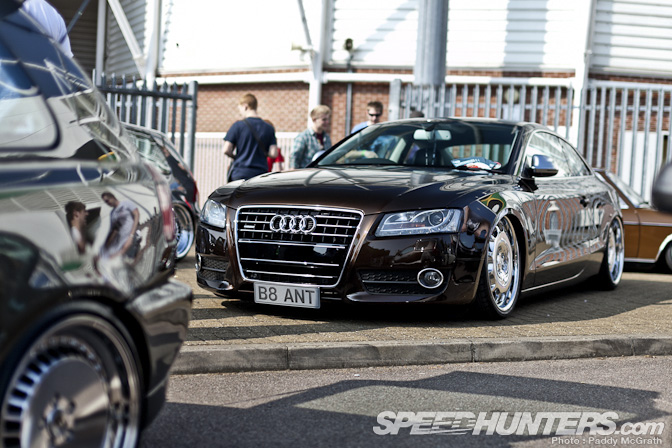 The Early Edition show featured some amazing cars but was an absolute nightmare to shoot. With cars parked so tightly together and crowds of people walking continuously in front of the camera, it was definitely a patience testing day. 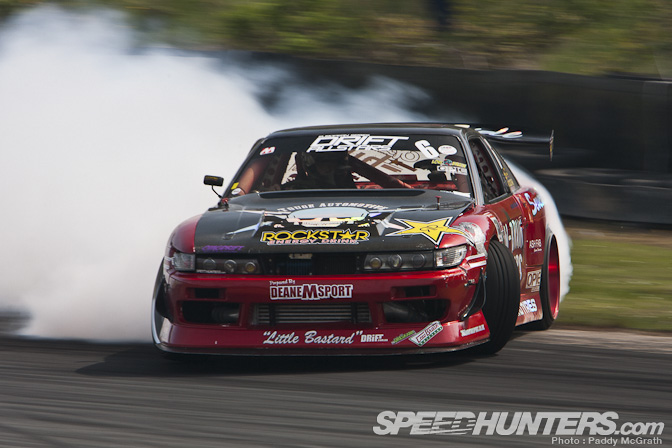 Drifting is where I learned my trade so I always relish the opportunity to shoot a full event. Teeside is one of my favorite drift tracks ever so this combination on a summer’s day was pure bliss. By talking with the drivers, you can find out where they feel is their sweet spot on the course. James Deane, WOT in third gear running to the outside clipping point. Smoke, angle and aggession – the perfect recipe for a drift photo. 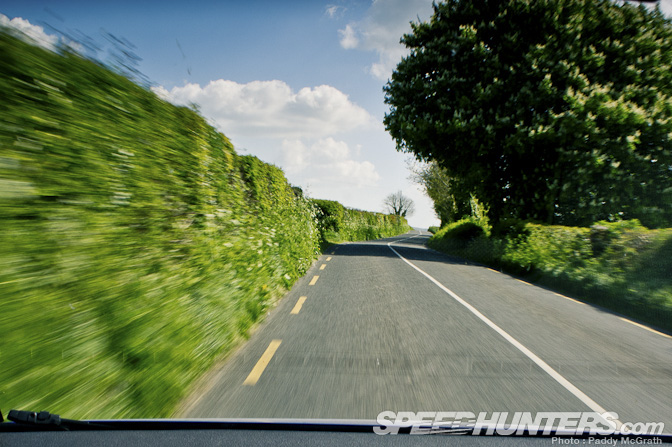 An impromptu detour on my way home from my girlfriend’s place was a reminder of why driving for the sake of driving is an important aspect of any petrolhead’s life. The camera was mounted to the passenger seat’s headrest and pushed as far forward as possible with the shutter speed dropped to better portray the motion. All within the speed limits of course. 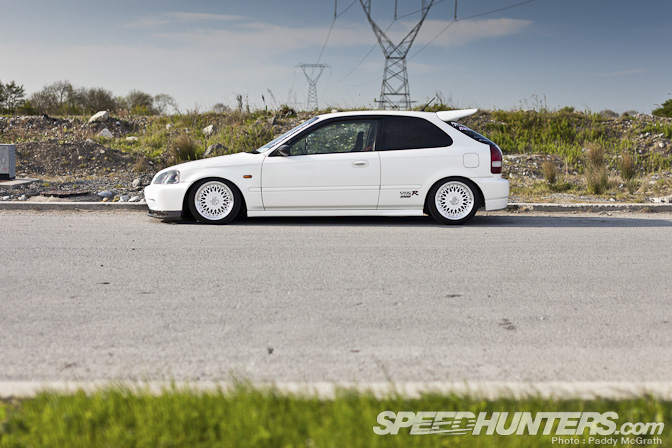 Usually Ireland is covered with a layer of cloud which results in boring, flat light. This wasn’t one of those days. I love shooting white cars and I find that over exposing them ever so slightly really helps them pop. 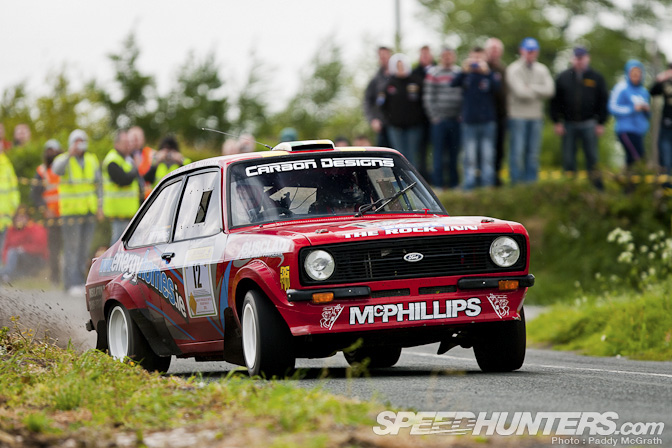 Each year I make a promise to myself to attend more rally events and each year I’m successful in lying to myself. However, the MKII Escort Challenge is a must attend for me. Shooting with the 300mm lens ensured I was far enough away and out of the dangerzone as I could be. As a rule, you should probably never shoot on the outside of a corner. When shooting rallies, I always try to put something big and immoveable between myself and the action should the worst happen. 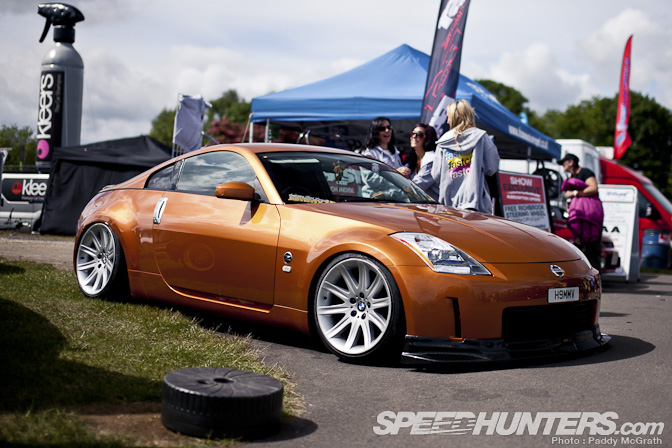 I always find shooting static shows a challenge. I can’t deal with people who keep walking in front of my lens. It drives me nuts! I always try to just keep it simple and bring you guys and girls back overall shots of the car without trying to be overly creative. This also helps to keep my blood pressure down. 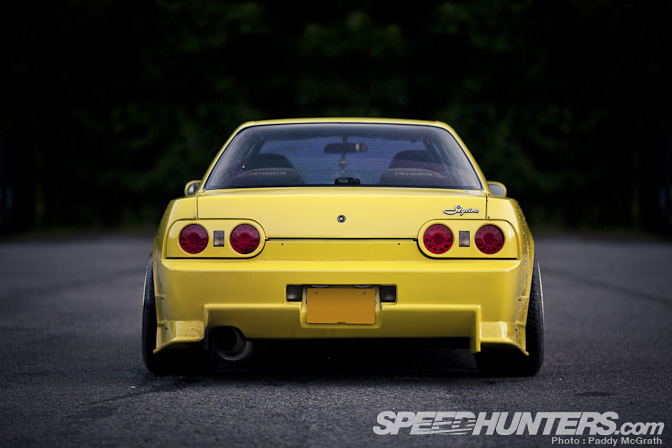 Bryn’s R324 was a car that escaped me for many years but we finally made it happen. With no location arranged, we pulled into a nearby motorway services and shot the car in the wide open space of the trucking area. Like the Integra shoot, it was a case of keeping it simple. 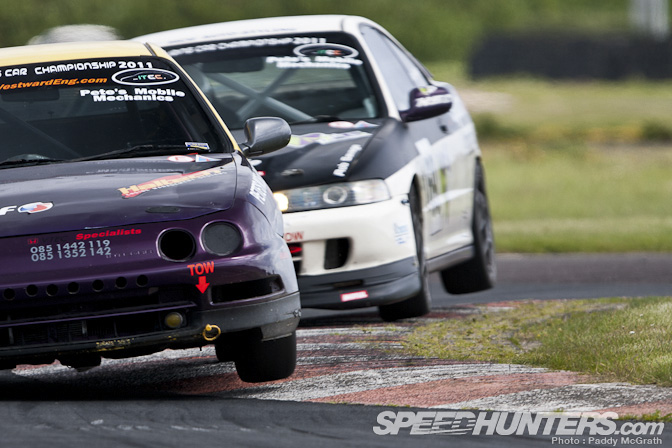 The ITCC have put on some amazing races in 2011 with closely fought and action packed races. Although Kirkistown isn’t the most photogenic of circuits, the drivers’ love its high speeds. I loved this chicane which the cars were cutting at every opportunity. It pays to watch what’s happening outside of the viewfinder so you can best find your angle.

I have two more parts of my photos of the year to come, the next of which features a couple from the 24HR Nurburgring and Gatebil.

The Look of the Irish

great shots and thank you for having listed the "data" (body, lens, settings) of each photo ...

you know, as a "starting" automotive photographer, i could use some help,

ps will you be covering the autosport show in birmingham in Jan??

There is no hyphen in VTEC. That's actually kind of embarrassing to see on a professional car blog, haha.

Gwan Carlow! Love your stuff, keep it up Paddy!

That car is simply awesome!!!!

I like the Exit data and lens specs very much.

Do you get much graining on the 5DmkII at ISO5000? I'm going to have to get myself a P&S, I always regret not having my camera with me.

Great shots! Any chance of the M9 and Caterham as a desktop?

Thanks for sharing your view as a photographer!!!

Keep the pics and comments coming,

Great stuff Paddy. Thanks for the story behind each of the photos & the shot details. The site needs more posts like this all year.

It's been a great automotive year indeed!

I love how he described a NEX-5 as a "point and shoot". That's what working with a 1D does to you...

I believe that Rod, Jonathan and Ross will be in attendance this at Autosport.

ISO5000 is surprisingly clean on the 5D MKII, especially if you can nail the exposure. A little bit of noise reduction in PP and it's pretty much usable in any situation afterwards. I'll be putting together a desktops post at the end of the month for the most requested images!

It is still a point and shoot and camera, even if it does have an APS-C CMOS sensor. I've just ordered an EF lens adapter so I can use my Canon lenses on it as the standard lenses are really, really soft.

F**k it anyway, I know there is no hyphen in VTEC but my hands were clearly working independently of my brain last night when I was writing this. ****! I've changed it just now so thanks for pointing it out.

Keep up the fantastic work Paddy. I agree with above, its great knowing the gear and settings used to achieve the shot in question, gives us something to aspire to and attempt to recreate.

great pics man! Thanks for posting the data you're one of my favorites on here. I love the "keep it simple" style you have.

ahh Data!! - helps me a lot.. some great shots - infact all the pictures are well composed - keep up the good, neigh excellent work!! - Thanks

Really enjoyed all the pics from all the shows i missed this year! hopefully you will snap some of mine next year..

Keep up the good work and have a good xmas and new year!

Thanks for the EXIF! It's really nice when we can know how these superb shots were done!

thanks for the extra data paddy! =)

stunning material Paddy ! thanks for sharing the exif data.

i also recently started as a automotive photographer. it's hard to get sweet looking pictures but it's just a matter of practice. thank you for the data used!!! btw, can we maken every single picture a wallpaper pleas?

My 'Photos of the Year' post is a short one this time, as I didn't get the chance to venture out in 2011; mainly due to my 'day job' at Need for Speed. My year started on a big high at the Dubai Autodrome for the 24 hour endurance