Another car I spent some time geeking out on at one of the SCCA Club Racing events from 2011 was this Swift DB5 run by Mark Schue. This car is designed and built by Swift Engineering down in South California utilizing some of their varied and vast engineering and manufacturing capabilities.

This car was actually built in 1992; one of the main giveaways might be the aluminum riveted central monocoque, with many modern race cars using a composite monocoque for the central chassis. Riveted aluminum chassis' have all but disappeared from modern race car construction because of their durability and longevity. With the vibration and heat produced in a competition car, the rivets that bond 2 sheets of aluminum together will wear their holes slightly oversize over time, greatly reducing the stiffness of the chassis and requiring extensive work to return to the original intended state.

Don't get me wrong though, this method of chassis construction is still very capable of producing a highly competitive vehicle, it's just not as cost effective as some other more modern methods.

With its sleek swoopy profile and lack of any major aerodynamic appendages, this design caters to extracting the most straight line speed from the mandatory 2.0 litre Ford NE series engine. The lack of wings or dive planes brings the drag numbers to ultra low levels allowing the Ford engine to utilize all of its power for propelling the car versus defeating drag, which is critical when you only have around 145bhp on tap.

The DB5 is a fairly compact car, while the rules call for each car in this class to be a 2 seater, the 2nd seat is just for show, just like in LMP and other classes with a similar regulation.

You can also clearly see here the front crash box that is attached to the central monocoque, which is again, riveted aluminum. This structure also holds the battery on this particular car, to help maintain an optimal weight distribution.

You can see in this shot that some new carbon bodywork has been grafted onto the car, a result of an off track excursion earlier in the year. You can also see the carbon fiber snorkel above the engine, which feeds fresh air and produces a small amount of a ram-air effect to the twin-venturi carb.

These cars run just 13×6 wheels in the front and 13×8 wheels in rear with no restriction on the tires you can run.

Since aluminum is such a great conductor of heat, the entire engine back is lined with gold foil. Cash4Gold anyone?

In-board rear suspension is definitely a more modern touch on this machine. Moving the shocks up on top of the transaxle allows the airflow to move freely through the rear suspension, which comes originally with the aerofoil section upper and lower A-arm suspension arms.

The Remove Before Flight tag is a nice touch, hopefully this car will never see any Mercedes LeMans low orbit flight antics.

Transmission is a 4 speed Staff's transaxle running a open differential as per the S2 rule set. You can also see here that huge brakes aren't a necessity on a vehicle of this size. Considering the minimum weight of the Sports 2000 class is 1310lbs I can see these cars being pretty easy on the brakes. Single piston aluminum calipers out back with 2 piece rotors with aluminum rotor hats reduce un-sprung/rotating mass.

You can see just how cramped the 'passenger' side of the cockpit is, with around a 15" minimum width, only small females, children, or perhaps a howler monkey could be suitable passengers, if indeed you ever found one willing to sit on the aluminum monocoque inches above the pavement.

This car also runs a full digital dash and data acquisition system to help monitor all the various systems on the car, and help the Schue guys make sure the car is running at or near its full potential.

Body work looks quite nice and shapely, with even provisions for the roll cage versus just cutting a hole in the bodywork makes for a more elegant design. You can also see some racers tape is used to cover up the seams on the front cowl section of the body work, most likely to reduce drag, every little bit helps in a tightly controlled series like this I suppose.

Underneath that cowl are the front dampers, which similarly to the rear, is a pushrod/F1 mounting setup.

Rules state you can run an aerofoil in the front bodywork, but without the ability to run a true wing in the rear, it would most likely throw off the aero balance of the car. Instead a carbon splitter is used which would probably work well with the flat plane rear spoiler you can just see in the image below. I also noticed a lot of competition cars in the Northwest usually run with the brake ducts partially, or completely closed up. Considering we rarely see ambient temperatures over 27 or 28C in the summer, keeping the right amount of heat in the brakes would be hard to achieve with too much cooling in the shorter sprint races typical of SCCA Club Racing.

Check out this car in action here and here! Looks like a blast out on track dicing it up with various Formula cars and other S2 racers. 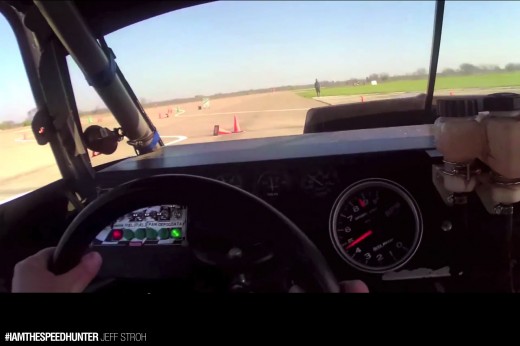 #IAMTHESPEEDHUNTER: A Camaro Built To Corner

Dude, club racing sucks. none of the guys race, and when a driver gets on the track and actually tries to win, they all cry and get him disqualified for rubbing tires.

VIewing it from the side it reminds me of a Matra 650.

Very hard to read, you need someone to subedit this,

Beautiful car, Mark. Wish mine looked
half as good! Johnnyb