Following on from yesterday's 1:10 scale 4AGE motor, we thought you might like to see some of its creator's other models.

Bogdan – aka demi76 – is a Speedhunters reader who obviously has a penchant for scaled down models.

He sent through a bunch of photos of his RC cars, including this DRoo-P inspired AE86…

…That is nicknamed the Crab Master.

…Inside you'll find plenty of one-off touches, like the fuzzy dice, fire extinguisher and harness. There's even a miniature car magazine to keep the driver occupied during car washes.

A recurring theme amongst Bogdan's RC builds is the influence of Japanese car culture. Take, for example, his Mazda Savanna…

…Which is done in boso style.

This is his 'Drift Garage' Levin Coupe, which sports some patched up dings and rust spots…

…Along with a busted side mirror and more body filler on the fender. 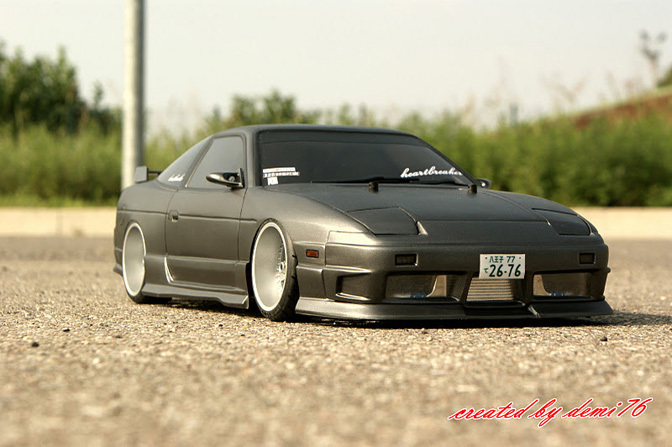 You'll spot Heartbreaker stickers on the windscreen and side windows.

…Along with a tacho and can of Coke! Nice work Bogdan.

This is awesome and an inspiration to others. Never got that detailed with my models but I did always add small touches.

Wish I had this much devotion to something... Beautiful work! That Mazda is sssick.

how much for the 180sx?! Seriously...does he sell them? I'd order my own garage full

Roll cages made out of bendy straws? I like it.

as a car guy this scale model stuff saddens me to the core, why spend all that time to replicate and live vicariously through someone else's creations when you probably have the skills and clearly the time to do it for real. its like saying hey i could go out and date a girl but i would much rather create barbies of my friends girlfriends instead. its creepy and sad just because it takes skill dosnt make it ok

Haha, seeing the Savanna and the C210 gave me a smile to my face. Amazing attention to detail, great work mate!

Very, very nice. DEMI76, you gotta do some race cars now that you obviously master the street car models.

Geeze Mitch, lighten up would ya!!!!

Making models is a completely different skill set to building a real car. I love your work Bogdan

Love the scale model stuff! The attention to detail just amazes me!

Hmm ... suppose if in japan they probably would have barbie-esque pvc models of girls all over their house.

But then these folks are from Italy ....

Mitch, what you are saying doesn't make sense. Owning 2 AE86s, a C110 Skyline and a RX-3 in real life is EXACTLY the same as having them in scale, and of course, modifying them in real size is the same process. Yeah, you're 100% right.

Demi lives in Italy, but he's from Poland.

These are great pictures of RC cars! Some shots I couldn't tell if they were full sized vehicles or models.