One of the reasons I came to the recent RC Drift event was to see this car. It's a close replica of the Team Need For Speed S14 driven by Matt Powers. I was amazed at all the details the owner was able to put into it. Markus Busch is the person who created this masterpiece after he did the same with the 2010 car you saw in the first feature I did. 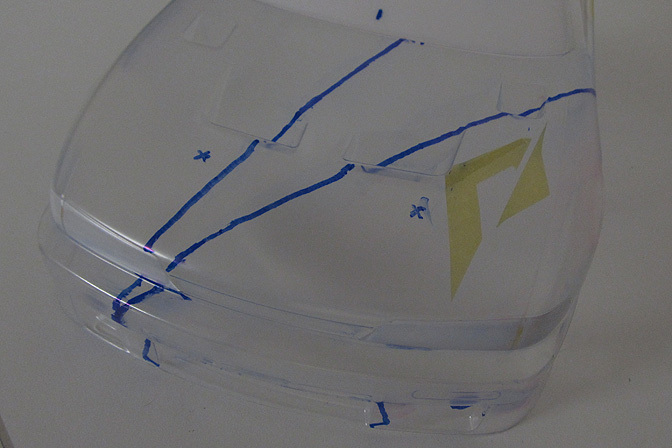 The car started as a blank Yokomo S14 body. You have to cut all the excess plastic to make it fit onto your chassis and after that you can start to paint it. Because Markus wanted to build this as a perfect replica he contacted Matt to help him in his quest.

I'll let Markus explain what he did to build this car.

"This time I started with the same Yokomo 1093 Speed S14 Bodyshell, but this time from scratch without recycling the front bumper. The side skirts just had to be cut a little bit more than original, but the rear bumper was much more work."

"I took thin polycarbonate pieces and started to build it step by step. I made a ground shape and used shoe goo to fit the thin plates around the bumper so no molding or anything. Easy DIY things everybody can do with just a little creativity. I did the same with the duck wing."

The chassis this car is built on is also made by Yokomo and it's called the DRB. This is also the kit I have been looking for to start my own little RC project.

The detail on this car is amazing, right down to the smallest stickers. It even has some battle scars from its encounter with Darren McNamara in Atlanta.

Matt kept Markus updated with information about the new 2011 livery and supported him with pictures and patterns. This enabled Markus to get as close as possible to the real thing.

These kind of cars only push me further into buying a car for myself. For a lot of people this is the closest thing they have to own a ‘real' drift car. After trying it myself I can understand why it is so much fun to do.

again...the attention to detail is amazing on this little car. Hats off to Markus

Pretty sweet, somewhat of an RC enthusiast myself, but wow, not everybody has a body with that much detail.

This is great RC replica, really great work and determination , i Got my self a SUPRA AASBO RC replica, Markus is my inspiration for it as well

Keep up the good work Markus also Speedhunters for being a great website i have you on my RC car as well,.

It even has the squat

I hate you guys! Now I wanna go out and buy this kit. I own a Zenki myself and damn that looks badass. Great attention to detail in this build though mad props to the owner.

Markus is a legend.

this is an amazing car with so much attention to detail. love it! speedhunters should have more RC drift posts...

thanks alot to Jeroen and Linhbergh for the support!!!

only one thing i have to correct you!! Matt and Me chating since last years Replica of his car.

He allways gave me such a good Feedback and supported me with cool Fan stuff that I wanted to give him something back... thats the main reason i put so much love into this car!!!

maybe Linhbergh is showing you a little bit more about the detailwork!?!?

I wouldnt mind getting my hands on this. Wonder if he will sell or make another one to sell.

Markus rips, I'm stoked he got some shine here on SPEEDHUNTERS, he's a talented eager fan thats into the sport for sure...