During my six years of photographing cars in Australia I've come across some passionate people, one of them being Trent Whyte from Mercury Motorsport. This family owned business, located in the Brisbane suburb of Wilston, started back in 2004.

Over the years, Mercury Motorsport established a strong reputation for building a variety of potent street and race cars.

Walking into the front entrance you are greeted by a number of trophies.

…Along with a number of Powercruise trophies.

Their showroom and offices are located upstairs and have recently been renovated.

Along with a diverse range of parts, there's also a lounge and flat screen TV for the customers.

No garage is complete without a stack of automotive magazines. Gracing the cover of this magazine is the 'NITTO' R34 GT-R, which is owned by Trent's wife, Tessa…

…It's also been on the cover for HPI. More on this machine later.

There are not only performance parts here. I also came across some unique registration plates such as these TOMEI ones.

There were some interesting custom parts too, like this 5-inch dump pipe which was welded by Mercury's fabricators.

On display was this wrapped manifold with Turbosmart wastegate.

Anyone fancy some giggle gas?

This Garrett GT55R turbo was one of the largest I've seen.

Exiting the main shop I began walking down to the rear garages, where I came across this Stagea…

…Equipped with a large pair of Endless brakes.

This bug-eye WRX was in the midst of receiving a fully built EJ25T.

Many Australians have a soft spot for the GT-R, ever since they dominated our touring car series.

At Mercury, this amazing lineup of R32s are all owned by workers at Mercury Motorsport!

Here we have Chris Acworth's clean GT-R. Keep an eye out for a spotlight, which will be coming your way.

Next up we have this deep pink GT-R sitting on a gorgeous set of TE37s. Belonging to Mike Walpole, is produces 650hp at all four wheels.

Finally, down the end we have Trent Whyte's 10 second GT-R. With a Tomei 2.8 stroker – and still retaining twin low-mounts – it produces 600hp at all four.

Inside the garage was Tessa's 'NITTO' R34 GT-R. A couple of months ago it produced a whopping 1072hp at all four wheels, making it one of the most powerful GT-Rs in the country.

Of course, that much power isn't useable on the street, so a new setup was installed. This produces a more 'subtle' 620hp at all four.

During my visit, a pair of customer R33 GTS-ts were on the hoists. They were receiving new Tein coilovers/DBA rotors and a clutch swap respectively. Don't be fooled by the number of Skylines though; Mercury Motorsports are heavily involved with a range of Japanese and Australian cars.

This R35 GT-R used to belong to Mark Hansen. You may remember Mark by his all-carbon Time Attack R35 which he raced at WTAC.

On the topic of Mark Hansen's R35 GT-R Time Attack machine, I found some spares upstairs. Here is the front bar. The car is currently being stripped back to the shell, with a rebuild to take place before the 2012 season.

The front rad support was still in the workshop too even with the Koyorad radiator attached.

Downstairs were three R35 motors which were awaiting shipment to AMS in the States for major upgrades. This particular motor is from Mark's Time Attack car, which will receive block improvements.

Over in the far corner were some more GT-Rs.

Around the garage you could find rear ends…

…And plenty of transmissions.

Opposite the garage is their fabrication workshop.

This, of course is where all the fabrication work is done. This is also where the Time Attack R35 GT-R was built.

Inside I found this cool poster on the history of Skylines.

Mercury Motosports also have their own AWD dyno, housed in a dedicated dyno room. I plan on popping by one of their future dyno days to see what interesting cars come out of the woodwork.

…Which belonged to the receptionist – Neeka.

So that's it for Mercury Motorsport. One of Australia's leading garages. Stay tuned for a few features and spotlights! 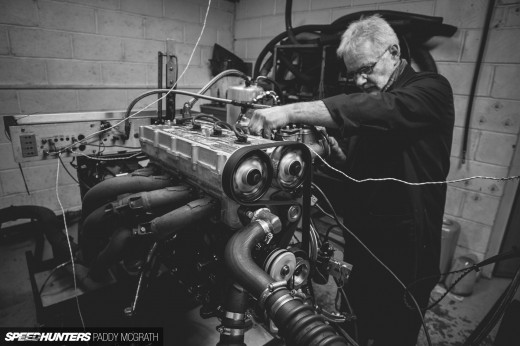 It's a shame about their horrid reputation, i've only ever heard bad things about Mercury's work, all of their flagship workshop cars are great but i've got friends that have been f**ked over badly. They have a bad wrap on most sites in aus.

I love the fact that everyone involved in the company has a proper monster as their daily driver. It speaks volumes about everyone's enthusiasm. Would love to check that place out in person some day...

Love how everyone at the company has wicked rides!! No XR6 Turbos being built though?

pics of neeka. lol a receptionist that drives an fd on TE37's has to be as pleasing on the eyes as her ride

Really am enjoying all of these shop features! Good god now I REALLY WANT AN R33....

Australians sure know how to tune Japanese cars!

I have the greatest respect for Trent and the team. To say they are passionate about their business would be an understatement. Quality Work, top guys.

I don't typically see workers having high end cars, or perhaps cars of that caliber! What??? That's 5 R32's right there! And what??? A receptionist drives a gorgeously looking RX7??? Hire me!

With these cars... I WANT to see the peoples that go with them...***(read the yellow R34 GTR owner and the receptionist)***

so they dont build mercury's????

these guys suck ass, don't risk them touching your car.

All show, nothing but bad experiences from me and anyone I know who has taken their car there. I wouldnt even let them change my oil.

Great show cars, in the real world for the real ethusist though keep looking for a place that cares about more than just what badge you have on the front and how deep your pockets are.

can you do a feature on the mazda 3 featured in the last photo. as a mazda 3 owner i'd like to know more about its engine and how i can squeeze more hp out of it. thanks!

@andy: what other shop in oz can u walk in and gracefully see a fleet of 13 R35 GTR's (yes mercury has a massive R35GTR customer base). Mercury has come leaps and bounds over the years and are now one of Oz leading one stop shos. . Every shop has its bad raps... the internet does it to everyone. i personally wouldnt go anywere else, they now have three workshops as casey had displyaed in the photos, fabrication, service and engine building, and their main workshop/dyno room... and never any less than 20 cars within its doors. and now around 15 staff members.. they have to be doin somethin right... great right up and shots casey!! if only some of the big guns currently residing at mercury could have been included (i.e) ceasar's old 34 , ceasars new r35... im sure we will see and hear alot in the coming months

Awesome cars in an awesome place!!! Thanks Casey for sharing!

wow... this made my day... i dnt usually comment on features. but this i have to say is AWESOME!

I wouldnt trust mm to touch my lawn mower let alone my car.

is that RX7 a Spirit R or do my eyes deceive me?

They build good cars if you have money, if you don't they screw you over. It you want good quality work go down to Croydon Racing Development! These guys are the best!

This is the reason why i love nissan it would be even better if we can get r34's in the states but you know have the 5-0 is gona be hating but if i had money i would get me a R32 keep up the good work mercury.

It's not every day that you come across a Mazda 3 like this. While the 3 may be a popular Japanese

i need to find that poster!

to "the unknown" your pathetic! seriously need to get a life you cant even say who you are? when your nuts are big enough to touch the bottom of your undies come back and complain again get out there and try doing something your self get out from behind your keyboard and try having as many happy customers as they do lets see how you go! cockhead