Street cars are a black art. There's no rulebook when it comes to street cars, leading to many different interpretations and beliefs.

For all the science that's poured into the building of a race car, the same can be said for the craft that goes into screwing together a street car.

Speedhunters is dedicating October to the artisans from around the world who have built the toughest streeters. The theme for the next four weeks is Street Cars and Sleepers.

It is on the streets that trends are born. It's where they evolve into movements; and its where they die off as fads.

Street cars are constantly evolving but they stay true to certain constants. They don't serve a singular purpose like race cars, so outright performance isn't the only important thing. Street cars need to be reliable, driveable and practical. While these appear to contradict the chase for more power and performance, enthusiasts have found ways to marry both.

While hunting the cars for this month's Street Cars & Sleepers, we came across some creations that left us speechless. Like this flawless Altezza RS200Z.

Many enthusiasts eventually give up their hobby when it's time to grow up and have a family, but for others, needing to take the kids to soccer practice hasn't even registered as a blip on the radar. If your R32 Golf becomes too small for your needs, why not move all of its running gear into something a bit more practical?

Few manufacturers divide the opinion of enthusiasts more than Honda. For each passionate loyalist, you can find an equally vocal non-believer. To some, cars like Civics will forever be shopping trolleys or under-powered rice rockets. Others, like Yonas Liu, will tend to disagree. Judging by his road-going 11sec naturally aspirated EG that can out run, out brake and out handle many Goliaths, he may have a point.

There are so many facets to what makes a perfect street car. Sometimes, it's just a certain je ne sais quoi.

Only a few of us are fortunate enough to own a street car and weekend car. Those who don't inevitably shrug their shoulders and simply roll them into one…

…Creating cars that are fun on the track yet equally at home puttering around in traffic.

But that said, it's rare to find examples like this E36 BMW that we'll be featuring. It's literally a race car with numberplates stuck on each end…

…With an attention to detail that would rival a show car.

To add some contrast, Paddy has shot this E46 M3 that has an E60's V10 shoehorned into the engine bay.

Lotus are synonymous with being raw and without compromise. But for some, it's still not enough. If your taste buds think an Elise is too bland, may we suggest adding some spice through a carbon body and a turbocharged 2.2l motor?

Linhbergh will be paying a visit to the folk at SP Engineering, who have been responsible for many insane Japanese and exotic street cars.

What happens when you mix RWB with Hoonigan? We'll show you this month.

During October, we will be looking into a particular niche within the street car fraternity: the sleepers. These are the wolves in sheeps' clothing. Sleepers are an interesting breed, deliberately hiding their true intentions beneath unassuming exteriors.

They masquarade as normal street cars, blending in with their surroundings.

Often, however, there are tell-tale signs of what lurks within.

Even the most unlikely of suspects, like this EH Holden…

Can be disguising a single-turbo RB26 conversion.

You wouldn't look twice if this unassuming R32 was zipping along the streets, although the exhaust note may get you suspicious. This little Golf was the result of a twisted Frankenstein experiment. It's now a living, breathing 650hp twin turbo R36-powered AWD monster.

For years, the mad man known as Chris Rado has been working on a secret side project. This labour of love is his interpretation of the ultimate Supra street car. This is a car that, even by Rado's standards, is extreme. And this month we'll have the exclusive on its build.

While on the topic of street car builds, we also have a feature on this Super Snake. As a collaboration between Need for Speed and Shelby, our very own Andy Blackmore has penned many of the details on this awesome Super Snake, and Linhbergh will be bringing you the full feature.

To give the build some context, we'll also revist the headquarters of Shelby.

On paper, you'd never think that Singapore would have such an amazing car scene. This tiny island not only has some of the strictest rules on modifications, but it also has some of the craziest car prices as well. Thanks to something called COE (Cost of Entitlement), you have to bid for your right to buy a vehicle. But if there's one thing that car culture has taught us, it's that enthusiasts are a resilient bunch.

The past few years have seen a dramatic growth in Singapore's car world. Although I was only there for three days, a visit to Garage R was at the top of the agenda.

GT3 is heading off to Zandvoort and so are we. While we'll be there for the racing, we also have our gorgeous Miki Taka flying in to do some girl hunting with our NFS Euro Spokesmodel Search.

Team Need for Speed and Schubert are currently in the lead of the FIA GT3 Championship, and we'll be hoping for a strong result in Zandvoort to lock it down. 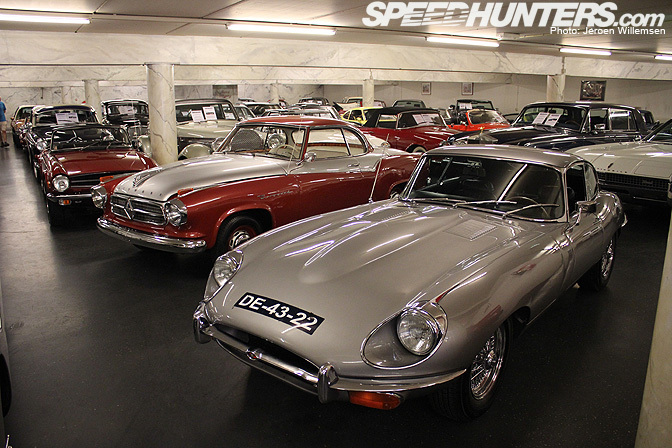 One thing we're always on the look out for are cool car collections. And recently Jeroen has uncovered an amazing classic car dealer.

Mike will be taking you inside this year's Long Beach Motorama.

With over 20 acres of pre-69 American vehicles, Mike has his work cut out for him!

…Don't worry, because we've got you covered.

…And the Speedhunters cameras will be trained on the 1320 to capture all of the action.

Paddy will take a look at the fifth annual Players Show…

…And will be sharing his thoughts on Hellaflush in the UK.

We'll also a visit to the people behind the smoke at Driftworks.

Casey's ears may still be ringing from shooting at Queensland Raceway's start line, but he'll be along shortly with full reports on all the Jamboree action.

Casey also spent some time exploring the cars off-track, and will have some tasty spotlights coming your way.

Drivers will have to contend not only with the notorious bank, but also a new course layout. With the championship still wide open, it could come down to whoever's willing to take the biggest risks.

While everyone's attention will be focused on who emerges as this year's FD Champion, we'll take a look at what goes on behind the scenes in staging the event. We'll also be doing something different for Fredric Aasbo's and Matt Powers' driver blogs but, for now at least, we'll keep that a secret.

Let's get the October ball rolling shall we? 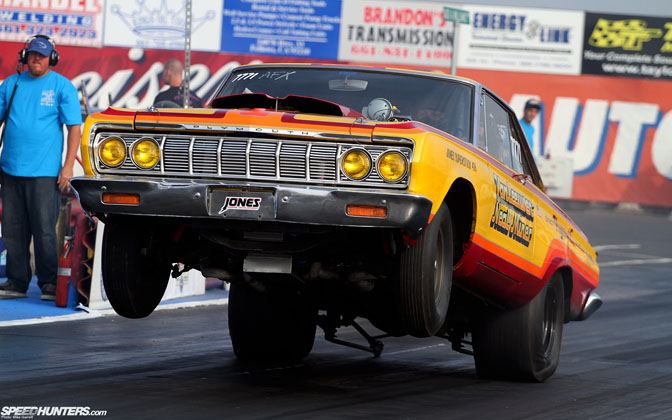 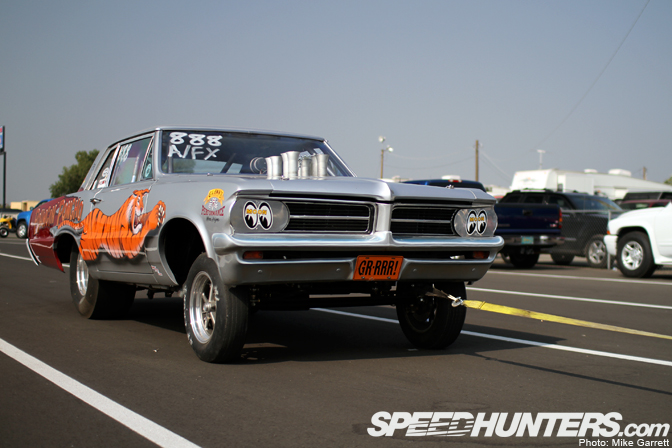 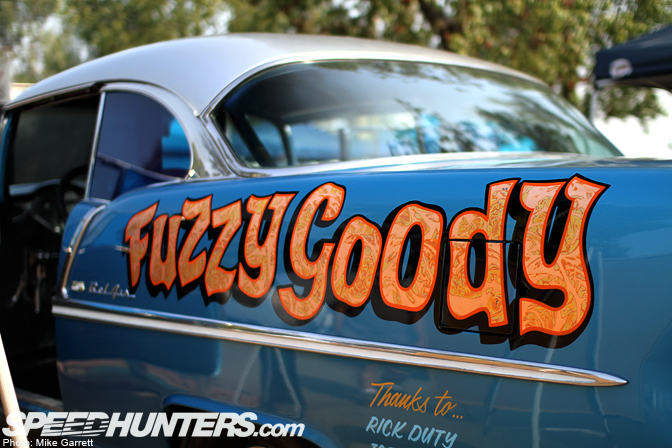 going to be a good month...

OOH! This looks like a fun topic. The creativety that flows from street car builders is unrivaled. An interesting topic for this would be Street Car Trends. Where do they come from how do they catch on and what could be the next big one around the corner?!?!

Thanks for that add in of that mk2 golf, looks cleeeean!!!

looking forward to the sleepers post(s)!!

Nice! I can't wait to see the up coming features!

This looks like it's going to be a great month, can't wait to see all the articles!

Cant wait to see the SPE post, make sure to get an update on the 2JZ RX-7 build.

I cant wait until my day comes to own a legendary car...

hell yah! looking forward to reading the sleepers and singapore articles! I love sleepers...especially that Mitsubishi with the RWD, longitudinally mounted 4g63t!

I've said once before on here before you lot have the best job in the world.

More info pics anything on that black s13. Please.

PLEASE do a feature on that black TRAKYOTO S13! it's so hot.

And, when I visited there last year, they were already on top of the LED modification stuff.

Sleepers do not have bling! Hardly any of the cars you posted could be classified as a true "sleeper"

Its gonna be a good month indeed. I really really really would LOVE to see the ultimate super sleeper Mercedes W124 300e with a Mercedes v8 in it. which i plan to do with mine. ^.^

this will be a fun month at speedhunters

what kind of car is the blue sedan under the beautiful white RWB porsche?? Also which engine is in it

Broke my heart when I saw the '64 EH at the WTAC show and shine. I thought I would be the first person to drop a dual cam RB30 into an EJ/EH then a few months after I came up with the idea I saw that and was devestated

orange E36 is retarded. Way too much fab into an intake that does very little (looks neat) and then a 45 degree chopped radiator inlet/outlet that saps performance and makes the engine work harder. thats some dumb shit right there.

true dat on the family thing. im looking into a sports sedan for that reason. sleeper grocery commuter by day, track beast by night.

IMO,one of the best street car goes to David Buschur with his Bad Bish EVO VIII

diggin the 180 in the third pic n expect a lot of hondas this month! =P

Light years away from your ASM editorial days Charles and you and the team at SpeedHunters are still doing great work! Keep it up!

looks like this is going to be interesting.. loved the 'Rocco and the 650hp twin turbo R36-powered AWD Golf.. wicked!

well, i'm from singapore and COE stands for Certificate Of Entitlement. its a massive pain in the ass, as prices can rise as high as 60 to 70k. for a piece of paper.

Singapore has some nice cars, but owning them isn't cheap either.

When you guys are in Singapore? I'll die to get my hands on some speedhunters stickies~~~~!!

Interested in the black EK hatch, is there a build thread or more pics?

That Sigma, that black S13 and more Charles <3

Spotlight on that grey eg civic!

"...EG that can out run, out brake and out handle many Goliaths, he may have a point. "

He MAY?! I'm telling you, HONDAs gotta be one of the most underrated cars on the planet.

I love street cars as much as i love purpose built time attack cars. Cant wait for this month.

Please speedhunters, cud you guys do a feature on the toyota altezza!!!! much appreciated

Street cars that like to be driven everyday, beyond their capacities, their limits.

Where can I get some info about the orange RX-7 at the top of the page? If anybody have any in fo on it, please email me at lukemomodujr@gmail.com. Thanks!!

nice!!! btw i am from Pakistan & that day i jst spotted a really nice sleeper it was a rx7 and looked all stock but until the owner popped the hood it had a 2jz swap so is there any way i can post its pics on the website???

looking forward to seeing the altezza!

hmm, that S!% drag car was pretty damn quick for it's first outing.

EH and Sigma caught the eye when I was at WTAC... looks to be an interesting month.

Is that white RWB Hunigan made for Ken Block ?