Another month is over – where has 2011 gone? – which means it's time to dig through our September shoots for the images that ended up on our cutting room floor. Enjoy!

Despite the warning from Gareth at Touge Automotive, Paddy still chose to take all the wrapping off his new Speedhunters air freshener. Weeks later, he can still only taste lemon.

Jenson Button slots into second place on the opening lap of the Singapore Grand Prix.

The BBS wheels from the Ferrari 150 Italia Formula 1 car.

Sebastian Vettel, wearing an amber visor for the night race, was untouchable all weekend.

Nico Rosberg negotiates the two sweepers onto the main straight of the Marina Bay circuit.

Australian Mark Webber ducks through the tunnel beneath the Bay grandstand…

…On his way to a third place finish.

Michael Schumacher flat out with the DRS open.

Head down and hard at work.

Black S30 is a thing of beauty.

Falcon rolling in to Billetproof.

Another view from Billetproof's model contest.

The cab of the slammed International Metro from Reno.

The assembled crowd in the Mondello Park get engulfed in a huge cloud of tire smoke.

Fredric remarking on the worn fender flares on this drift spec BMW. Tough!

A Pro Drift marshal seems happy to stand on the inside of the first clipping point during one of the practice sessions.

Ben Collins AKA the Ex-Stig seems to have quite the following in the UK. Here he's getting swamped for autographs at the Trax Show.

The stunning 1000 bhp SATS Drift spec Supra heads back into the pits after qualifying for BDC Trax at Silverstone.

Phil Morrison tries his hand at a 90 degree drift entry during qualifying at Trax Silverstone. 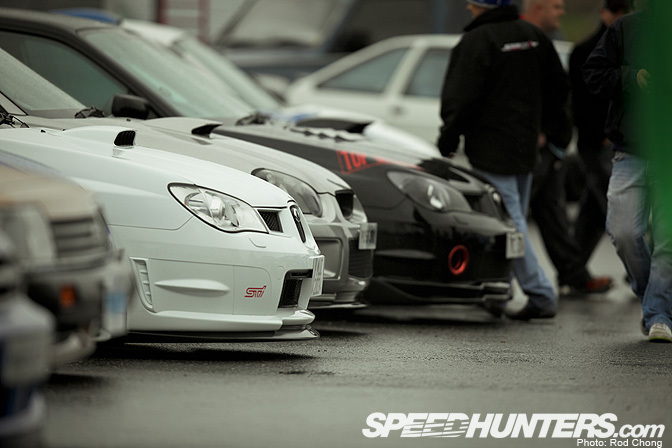 A line of Subarus at Japfest Ireland.

Edward Sandstrom ponders the use of chrome at Edition 38.

Dmac was talking about the brunnette Maxxis Girl from Trax in his post event driver blog… this shot is just for him.

Likewise with a queue of priceless cars waiting to be unleashed on track.

Johnathon was feeling a little under-branded at Trax. Rod was more than happy to help out.

The London weather can always be a little unpredictable this time of year, but Drift Allstars Wembley was most defiantly four seasons in one day.

Stephen Brooks give us 'The fang'

Ben Broke-Smith.. The most dangerous man Silverstone have seen in 16 years, apparently.

Motor Mavens 'The Briddler' made his first appearance of 2011 at Drift Allstars Wembley.

Some racing action from Goodwood: this is the Shelby American Cobra Daytona Coupé in the RAC TT Celebration.

A horde of Jaguar E-Types took to the track for the Fordwater Trophy.

Rarities are, if you'll excuse me, a common sight at Goodwood: this is the Aston Martin Project 214.

A pair of C-Type Jaguars in the Freddie March Memorial Trophy.

Cars are driven hard at the Revival, regardless of value. They are, after all race-cars. This is another rare car: the Alfa Romeo 3000 'Disco Volante' leaning over hard as it exits the chicane.

And finally the Allard 2J, perhaps the most entertaining car at the Revival: all low-end torque from its big V8 and sideways action out of any and every corner. Great fun!

…Soarer parked next to it.

And to finish off a stanced Crown Majesta from Breeze.

AWESOME. You used my suggestion. Hope this happens every month as I recommended!

The front bumper of the Soarer looks like it was taken from an Aristo, haha.

Anyone wonder whats going to happen as we head into some of the winter months for some of the world. Or Formula Drift Round 7 for that matter

The thing that struck me about the F1 shots is the visible amount of front camber. Is that a typical set up or a street spec? Perhaps it's just your photography, but I've never noticed that much camber on an F1 car before.

I'd love some speedhunters swag (air freshener and lanyard), but i'm not happy with the shipping to the US. Maybe you should find an American distributor? 10 bucks shipping is a little hefty for 2 dollars of product

F1 cars can have around 4 degrees of camber, but I believe Pirelli revised their recommendation to a maximum of 3.75 for one of the recent races.

No feature on the RWD YB Fiesta?? WTF dudes lol

scarface_au: At Spa Pirelli asked the teams to limit their camber to four degrees (and 3.25 in Monza) because the tires started overheating on the straights. But I'm sure they run more on slower circuits, around five degrees I'm estimating. Has been the case for years.