For this ‘Behind the scenes’ post I wanted to share some of ‘the secrets’ we have as
photographers. I still don’t consider myself as a professional photographer but
with the right equipment and help of my fellow Speedhunters I’m getting there.
At the recent GT3 event on the Zandvoort circuit I tagged along with Jonathan
Moore to see how he approaches the race as a photographer. I asked him if he
could reveal his camera settings and which equipment he used. I’ll will be
doing the same with some of the shots I took at the same places Jonathan did
for comparison.

I just recently got myself an brand new Canon 60D after shooting with several different
Sony DSLR’s. I chose to go with a Canon because all the other Speedhunters are
also shooting with them so it is easier to exchange lenses during an event. I
got to borrow Rod’s 70-200 and I brought a 24-70 lens myself. This was my first
real race event with the new camera and it definitively didn’t disappoint.

Jeroen: I followed Jonathan around the track but we started during the grid walk. It is a bit
hectic with all the other photographers trying to get the best shots and especially
with all the VIP guests walking around. I caught Jonathan here while he was
photographing one of the grid girls while we waited for the GT3 cars to arrive.

Jonathan: Ha, you caught me out here! No chance of missing what I was taking a shot of… For the grid walks I put the 24-70mm on one Canon 5D mkII body with a Speedlight, and leave the 300mm on the second body. Keeping the big prime in place means less messing about on the run to the first corner (which I’m always in a panic to make in time), plus gives the chance to take nice and tight portraits even on a packed grid.

Jeroen: After the
grid walk and after all the cars lined up we made our way to first corner to
cover the start of the race. I really love the rolling start sequence during
the GT3 races. All the cars come thundering down the main straight and into the
first corner. While Jonathan was busy shooting I just enjoyed the sights and
sounds.

Jeroen: When we
witnessed the start we quickly turned around and headed towards the exit of the
first corner. In some of the corners there aren’t any armco’s so you can take
some really cool unobstructed photo’s like Jonathan is doing here.

Jonathan: You could get nice single-car shots as they came out of the banked first turn, Tarzan. I change the single-point focus to lead on the right for these kind of shots, and from here on I dropped the exposure compensation down a 1/3 of a stop to help with the bright light against the lighter cars.

Jeroen: While we made our way further down the track the path you walk on becomes much smaller. The
person in the green jacket was shooting with a video camera so we positioned
ourselves behind him so he had a clear view. This was a pretty cool place cause
we could see the cars coming directly at us.

Jonathan: We then carried on walking round the inside of the track. This is an easy head-on shot – I added a 2x extender for added reach. You lose a couple of stops with the Canon extenders (and you can only use centre-point focussing), but I think it’s worth it in some cases. I don’t trust head-on auto focus modes so I tend to keep re-pressing the shutter until I get the framing I like – I don’t like spray and pray shots! I kept the speed high but not insane, so they’d be some movement in the background.

Jeroen: This corner is pretty popular so you will have to ‘fight’ for a place. As a photographer you
are always looking for angles or places that haven’t been played out. So we
just took a few photo’s here and went to my one of my favorite spots at the
track.

Jonathan: An even easier head-on! Wide-open (the maximum aperture is reduced to f5.6 with the extender) and a great place on the track to get packs of cars coming straight at you as they approach the turn four hairpin. It can seem difficult to get these kind of shots when you’re behind the fences as a spectator, but as long as you’ve got a reasonably long lens, are right up against the fence and as perpendicular as possible, and have the biggest aperture you can then you can still get great head-ons.

Jeroen: This spot is at the end of the Audi S corner and it gives you multiple angles to shoot
the cars, from the point they are hitting the apex to the point when they are
heading towards the final corner before the long straight.

Jonathan: These kind of sweeping curves are great for slow shutter pans to get trailing cars blurring out in the background for that feeling of speed. Again, a leading-right focal point helps maintain the focus. A wider shot brings in a bit more of the atmosphere, so you can see the fans on the dunes overlooking the Audi S curve. It was funny reading comments from some people asking why use a telephoto and flash in the daytime – as Paddy has already said, it’s always best to be prepared. Also, don’t underestimate the throw of a decent Speedlight, which can sometimes help just give a shot a little bit more ‘pop’, even in daytime. But most important, for the Team NFS car the livery incorporates reflective lines that only a flash brings up in daylight!

Jeroen: Here is a shot I was able to take from the exact same position that Jonathan was
standing. I love to shoot the cars in full profile.

Jeroen: This is the location I shot the opening picture from. At one point I was even laying on the
ground to get that perfect shot when the cars are running wide and spray up the
dirt.

Jonathan: Back to the extender and aperture priority to capture cars running wide on the exit of the Audi S. You want to be able to freeze-frame the dirt and debris if they run wide, plus get the incredible heat-haze as they accelerate away from you.

Jeroen: This is the shot I got with the lens I borrowed from Rod. I loved the fact that you could
see the different lines the drivers took when they excited the Audi S corner.
Some of them went really wide while others didn’t even touched the curbs. 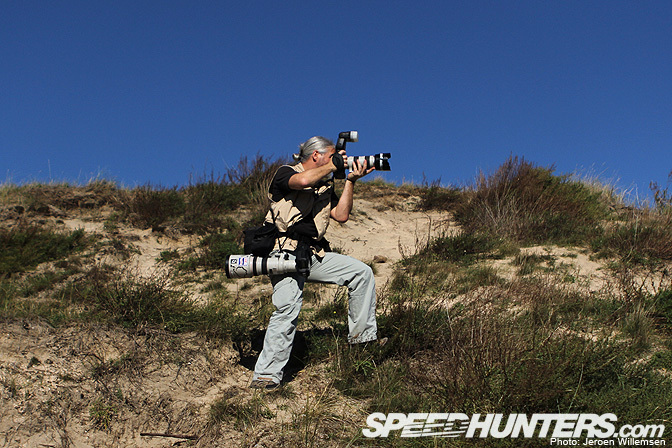 Jeroen: Some people tend to forget that we as photographers walk a lot miles on race days to get to
and from the paddock or the media center to the track. There are shuttles
available at certain tracks but at Zandvoort it is al muscle power that brings
us to the places we shoot from.

I caught Jonathan here on the inside of the last corner also known as the Arie Luyendijkbocht.

Jonathan: Another great thing about the dunes of Zandvoort is that they can provide a bit of elevation, and in the right position you can get pleasing shots even shooting against the sun, like here on the entrance to the final corner. The sun picks out the ridges in the banked gravel trap and the car shadow is nice and crisp with the low sun.

Jeroen: I would have loved to use Rod’s 70-200 lens here but he needed it himself so I went
with my own 24-70. I think that the shot would have been better if the car wasn’t
as dark but I think the reason for that is I didn’t use my sunvisor on the
lens.

Walking, walking, walking. So much track and so little time! That’s the only pain about one-hour races. Once you’ve got the start you have to make a decision about where to go and how much time it will take. We had to briskly walk back from the last corner to catch the finish, which we just managed. Perfect timing as usual!

I gotta thank Jonathan for his time and the good advice he always gives me at the events.

More Behind The Scenes features

I love that you put the exit data in the captions.

hehe i know that blond girl, a girlfriend of a friend of mine :p Nice pic's

Great insight, thanks for sharing!

I like the first picture of the sand dunes with the SLS in it. It feels so abstract, compared to the rest of the picture.

this gt3 stuff bores the life out of me, and its also boring to watch it on tv,

For all you guys who are interested in photo settings. If you are using Firefox, download the plug-in called 'EXIF Viewer'. It allows you to view all EXIF data from the Speedhunter photos (most photos in general) through a right-click menu. Extremely easy to use. That's how I often spend half of my time on the site doing

Kudos to Speedhunters for not purposely stripping off this data from your photos!

Err, 'Raff', dude, what's your point? If you're not interested, you know you don't have to read it, don't you? Guess your mum is making you, huh?

Great write up... I am a big fan of Moore's photography.