A cool road trip on the most beautiful roads in Southern France. That was the goal we set ourselves. My name is Amaury Laparra and I joined up with my mate Clément Daventure for a three week drive through the South of France in a classic BMW. We both study interior architecture and design in Paris, and there's nothing better than simply taking off and experiencing some magical moments. For our road trip, Clément bought a BMW 1602 that had reached the venerable age of 37 years but had less than 72,000 km on the clock. It's in absolutely mint condition, and was ready to take us on a journey of several thousand kilometres through the countryside.

We had a clear vision of our road trip. Our aim was to capture the spirit of the 1970s as much as possible – we would only be using maps and no GPS. Motorway driving was definitely out. We also wanted to keep as far away as possible from the tourist traps; being gridlocked in a traffic jam with no air-conditioning is nobody’s idea of fun.

9th August, Bourges, roughly in the middle of France. We take off and our first stop is Grenoble.

We arrived in Grenoble at midnight. We slept here at the gas station before waking up five hours later to begin on the Route Napoléon.

The Route Napoléon: this was the real start of our classic road trip!

There was something different about every kilometre, and negotiating each new bend was a really exciting experience in this car.

Arriving in Antibes, at the end of the Route Napoléon, we battled our way through the torrential downpour and arrived in Cannes.

And an hour later, the sun. Probably better!

The next day, we decided to go to Monaco passing by the Col de Turini. From Cannes, that's a 30min drive by the motorway. We did it in 7 hours!

The route is like one big slalom run. What a blast.

The Col de Turini at its best !

Yes, I asked Clément to turn around and drive through the twisty roads again so I could take this shot. He didn't complain!

You have to get used to this kind of hairpin. Actually we did not see any other kind of bends out there.

It's very important to always have good reading material on hand… like a map.

In Monaco, just passing by. There's not much to see when no Grand Prix…

The next day, we left Cannes at 6 am.

The very warm air during the day persuaded us to drive during the evening as much as possible and in the early hours of the morning. Driving up the Col de Turini at 4 o’clock in the morning is a really awesome thing to do.

Arrived at 8am in St Tropez for the breakfast. We were surprised at how serene and peaceful the atmosphere was even at this time of the day.

The Cévennes was our next destination. A little mountain range that turned out to be our favorite drive of the trip.

After travelling for half an hour, we were hopelessly lost and found ourselves with our 1602 somewhere in the middle of nowhere.

Finally, we reached the Cévennes. There are only 14 people living on each square kilometre here. We didn’t even see a car for the next three hours.

We drove through a couple of enchanting historic villages…

…And came to a stretch of road that was marked as 'impassable or hazardous road'. Well, it turned out to be true!

The route was a succession of hairpin bends and then the road started to get narrower and narrower, until it was a single-lane road only wide enough for one car to pass.

We kept driving kilometre after kilometre with the thrill of uncertainty as to what or who would be around the next corner. Sheer rock faces were on one side and the other side was on the brink of a precipice.

After the Cévennes episode, it was back to Bourges. We travelled exactly 4,573 kilometres right through France in the course of those three weeks. Since the BMW 1602 was absolutely original, it took us a little while to get used to the soft suspension. But the BMW was incredibly good fun and utterly dependable. We didn’t have any breakdowns, the engine didn’t overheat, and no oil was lost.

While this was our first road trip, it certainly won’t be our last. No way.

- Words and Photos by Amaury Laparra 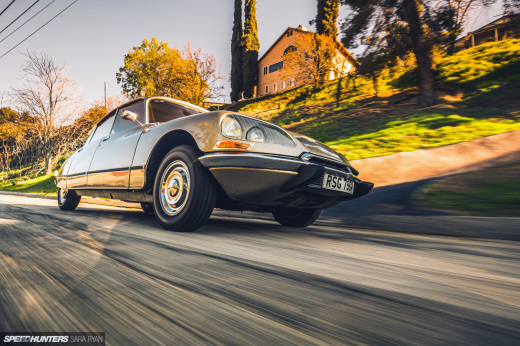 That is TOO cool. I really want to do a similar thing one day.

Fantastic! Did a similar trip by 356 from La Faviare across the mountains to La Rochelle... amazing!

There are someone working in the mail section?

because i send one since 2 weeks and i have no answer. please a coment.

I like old school colors in the pictures and i know these road! I'm french and i live in Avignon

What you did was just awesome!

I admire your courage, buying a car for a roadtrip! How much did it cost you for a beautiful car like that in France?

The hairpin picture reminds me to initial d games, it's almost the same. What a road trip! Even you passed through the col de turini!

Love the 1602, beautiful example. I studied architecture in Paris for a year, its a pity we didn't meet for a drive!

There you go, speedhunters is not only about raw speed. What a nice trip that must have been.

Love the car and this roads.

Thanks to you to show that it's a chance to leave in France!!!! too much people seem to forget it.

random, but still an interesting read

It doesn't matter what car you drive, as long as it has the same fighting spirit like you to survive in this modern world.

I'm sad to see you got just near the Haute Savoie but did not have a drive here, there's a plenty of wonderful roads and sceneries

it would be awesome to have roadtrips of the rest of france.

great shots by the way.

Beautiful, not much else to say.

Really cool article, and some great photographies, thanks.

Would like to do this to... But perhaps in some Ferrari 458 Spider or Enzo... That hairpin just looks good for some little drifts

Nice road trip no doubt. But even better are the photos of Amaury, love is vision and edition.

Wow, that's so awesome. An old BMW and some stunning scenery, looks like a great trip.

I love you guys. no homo

I never use gps and rarely use motorways in my daily life. It just feels better way of doing things. This kind of road trip in France is one of my dreams, but the fuel prices prevent me from doing it until I graduate. Luckily there are some awesome roads here in Finland too, but nothing like that really. Just a little tip to everyone here: keep off the motorways and don't hurry. Do things old school and enjoy the motoring life while it's still possible. Every drive should be enjoyed.

It's very important to always have good reading material on hand....like a map.... Like a PLAYBOY!!

you should feature the epic road trip of "the gemini diaries" , driving around the Philippines in a Isuzu Gemini - http://www.facebook.com/thegeminidiaries

Love the spirit, love the story, love the picture's.

*Imagine driving my s13 through the hairpins*

This is definitely not your usual speedhunters feature, but that's why I'm liking it. The pictures are awesome and they really draw you in the more you scroll down the page. Out of all of them, I really wish I could've been there to visit the historic villages. Living in complete peace away from all the nonsense in the south of France sounds great to me!!

This was the kind of places that NFS was known for until Underground. Some of these places are really for racing but much of it no one has a chance to go wild on. That's what we really need in a game is too really have fun on these classic roads doing less classy things. It would be great to see it go back to its roots even over Shift or Hot Pursuit.

This is so amazing, bookmark for future trip of my own.

That's just beautiful. And without any modern cars in the frame, and with such historic scenery, these photos look like they're straight from the '60's!

Wow did not think you guys will like that much this trip, I'm very glad you appreciate it !

We never organized this road trip, we just draw it as one goes along.. that might help us to find awesome settings. Just looking at the map to see the called "dangerous and twisty roads". The concept is simple so I'm hoping for the most of you to realize this kind of trips, in Finland, Australia, China, USA or whetever it is, this is living !

Professor: Can't agree more with you, you're totally right. There're great roads everywhere, you just need to find them, they are rare and driving on them is even more a pleasure. Autobahn are for fake people haha.

Also, a big thanks to SH for publishing this article.

My god, this is utterly fantastic!! Wonderful photos and what a trip!

Thank you for this excellent pictures! Great choice of car and roads too. Thanks again

Southern France. My favorite place in all the world.

Wow i got no words left to describe this!

My name’s Amaury Laparra and since an early age I've been a huge automotive fan. Although I

Every now and then we publish blogs from our readers, such as Amaury Laparra's photographer's