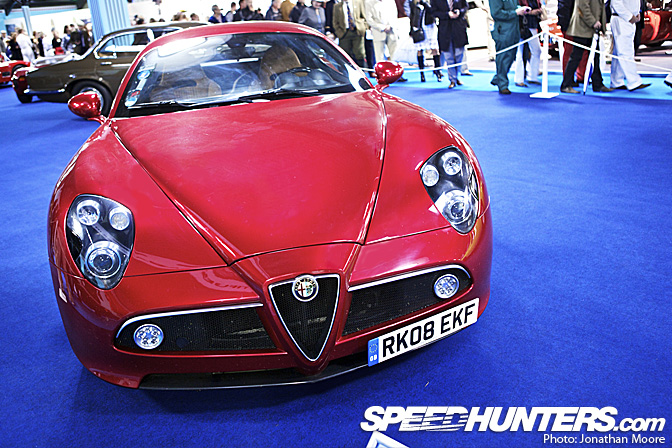 Earls Court in London was famous in the 1950s and ’60s as being home to the British International Motor Show, and once again the Goodwood Revival opened up the doors of its very own Art Deco homage to that iconic event. It’s the one place on the site where cars past 1966 are actually allowed to be on show – but they have to be quite some car to deserve the honour…

Earls Court has a family link to Goodwood: the site of the original building in West London was owned by the grandfather (the Earl of March) of Lord March, the Revival organiser.

Each year the Earls Court Motor Show at the Revival has a theme, and 2011 sees a celebration of The Most Beautiful Cars In The World: 23 hand-picked automotive gems that the appreciative crowds were able to vote on over the weekend.

Around the outside of the concourse d’elegance, current manufacturers were allowed to show off their modern wares on stands dressed in a ’60s style. The excuse was that this was the Motor Show Of The Future: an opportunity for Maserati, Jaguar, BMW, Rolls Royce, Jeep and Ford to showcase what their cars might look like in the distant future of the 21st century. Therefore we had Maserati Mistral next to GT; Jaguar E-Type next to XFR; Ford Corsair next to Focus.

The best thing about Jeep – 70 years old this year – was, apart from this classic, the pair of sofas where you could sit down to watch Jeep TV spots from the ’60s and ’70s. These mostly involved showing two men in cowboy hats with spray-on smiles being shaken to pieces whilst their Jeep bounced over loose ground and the voice-over told you how modern and practical Jeeps were…

More alluring was the BMW 2002 Turbo on show. This was the fastest model of the 2 series, launched at the Frankfurt motor show in 1973. It was the first European production car to use a turbo, which gave the 4-cylinder 1990cc an extra 40bhp of grunt.

1,700 Turbos were built, despite it being launched slap-bang as an oil crisis hit…

The 170bhp motor pushed the 2002 to 131mph, and the addition of steroidal wheel arch extensions and enormously-wide rubber served the 2002 well on track as well.

The cars of the main concourse d’elegance offered an eclectic – and tough choice – as to what you’d vote as the most beautiful car. The 1937 BMW 328 that greeted you on arrival was paired with this 1954 Bentley R-Type Continental. Its flowing coachwork and elongated tail gave the two-door car a surprisingly graceful appearance – for something that weighed nearly two tons! Its 4.5-litre straight-6 pushed out a respectable 150bhp and could get the car up to 120mph on a good day – though it did take about an hour to get there. But when you got there you were very comfortable.

Ah! A 1958 Citroen DS19. Perhaps not beautiful in the traditional sense, but certainly breathtaking in its originality – and a deserved contribution to the show as well as our Top 20 Most Influential Cars.

Z for Zagato… Paired with the words Aston Martin, you know you’re always onto something special whatever the period in question. This is the 1960 Aston Martin DB4GT Zagato.

Almost inevitably, Italy was responsible for the largest contribution to the show. Scarlet dominated one end of the room, with a trio of cars that challenged you to look beyond them for the vote-winner.

Behold a 1968 Alfa Romeo 33 Stradale. One of the rarest Alfas (only 18 were reportedly built), this was the road-going version of the Tipo 33 sports racing prototype.

The curvaceous body was designed by Franco Scaglione, and it was the most expensive production car of its time. Its dihedral, butterfly-style doors featured exquisitely curving glass, and the large glass windscreen shows off the quilted-leather that covered the interior of the car right through to the engine bay.

But then it’s up against the Ferrari Gran Turismo Omologato – the ultimate evolution of the 250 GT series, built by Ferrari to satisfy homologation requirements for Group 3 Grand Touring racing. It didn’t – 100 were required, only 36 built, but this was (is?) Ferrari.

This example is a 1962 Ferrari 250 GTO. The Giotto Bizzarrini and Sergio Scaglietti styling used a cut-off Kamm tail for reduced drag and the dry-sumped 302bhp, 3-litre V12 propelled the GTO to 173mph. 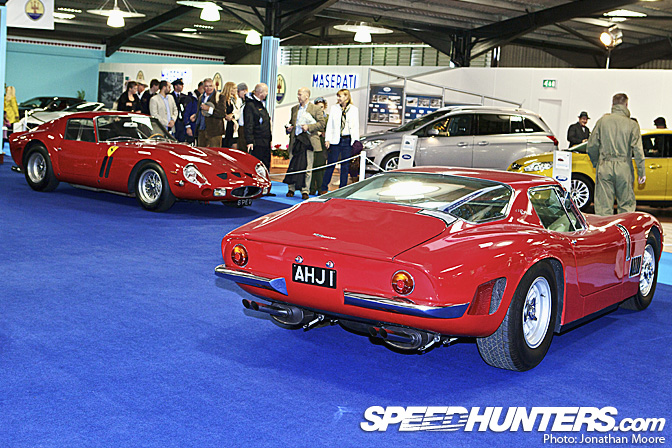 Talking of Bizzarrini, the last car in the trio was this 5300 GT Stradale from 1966.

Bizzarrini was a former Alfa, Ferrari and ISO engineer: like the Alfa 33, the 5300 was a street-version of a thoroughbred racer. And like the Alfa it was also rare – though here it’s thought only three road cars were every built.

The fourth Italian connection was provided, of course, by Lamborghini. A lurid, beautiful two-fingers to Ferrari’s supremacy, the Miura took the title of the world’s fastest production car when it was launched. 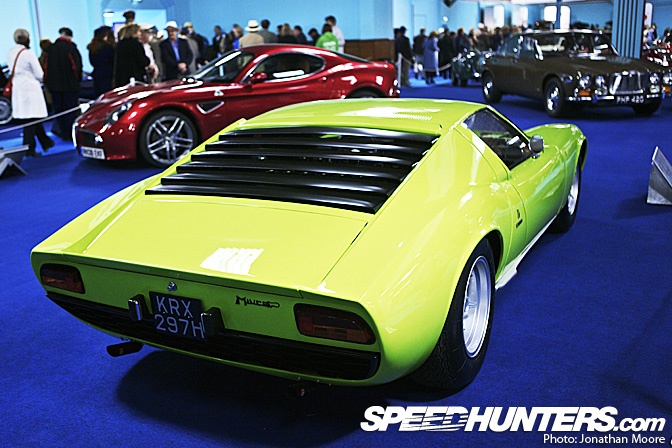 It’s a car that should never have been, as it was effectively developed as a skunkworks job undertaken on the sly by giddy Lamborghini engineers in their spare time. Seeing one is heaven enough – two sit in Lamborghini’s museum in Bologna.

The Miura (this is a 1968 model) featured a racing-style mid-engine: a 350bhp, 4-litre V12 with a 171mph top speed underneath its sumptuous Bertone styling. It’s a car that easily stand shoulder to shoulder with contemporary designs.

It wasn’t all southern Europe’s way though: the 1967 Toyota 2000GT proved that Japan could produce world-beating sportscars.

The original Japanese super car, the 2000GT certainly held its own amongst the Latin stallions and bulls and British Big Cats.

Britain figured a close second in the number of cars representing a nation, with eight up (of which a heady four were Jags). The slightly strange inclusion of the 1968 XJ6 (classic looking, rather than beautiful in the way that the E-Type or XK120 are, I would suggest) was balanced by a pair of E-Types and this, the 1991 Jaguar XJ220. This was a prototype model – and another car developed under the radar by engineers. The sci-fi sculpting of the 220 hid a 3.5-litre twin-turbocharged V6 developing 542bhp: that meant 0-60mph in 3.8s and a top speed of 217mph. 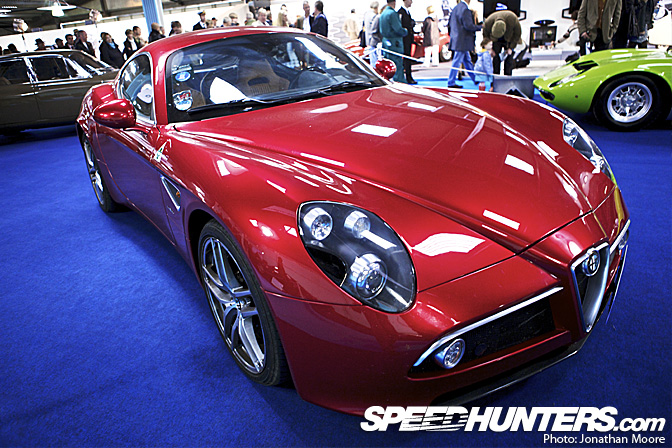 Surprisingly, one car from the last decade was allowed onto the concourse: the 2008 Alfa Romeo 8c Competizione. But then look at it! It’s a ridiculously good-looking car. 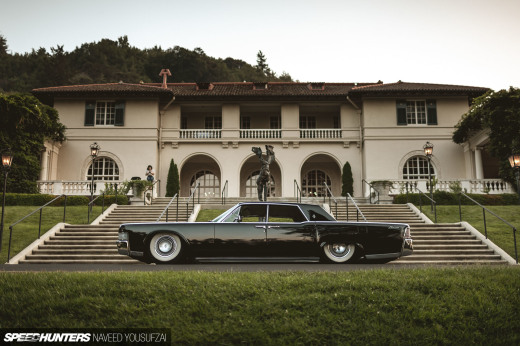 American Luxury, With A Touch Of Gangster 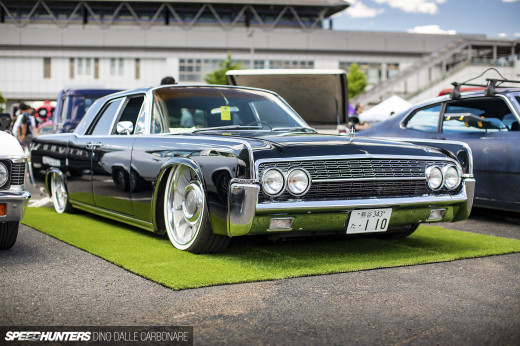 Bizzarrini,Miura, several of Giugiaro's finer works, but not his work that had the greatest impact on the automotive world. The car that took automotive design into the modern age, out of the carburetors and chrome of the 70's and into the fuel injected and aerodynamic world of the 80's. The Piazza.

Thanks for the pics, the 8C just gave me a flashback of seeing an 8C on the road in Paris in August when I was there. I nearly slipped a disc trying to get a better look at it! One of the most beautiful cars made in the last 3 years in my opinion - although those wheels leave a little more to be desired.

The BMW is NOT a turbo it's a naturally aspirated tii version in race trim!!! The wheel arch extensions you see on this model are called Scweinebacken which means pigcheeks in englisch. The real Turbo extensions are screwed to the original body panels. http://www.autowallpaper.de/Wallpaper/images/BMW/02er/2002turbo/bmw-2002-turbo-1.jpg that's what the real turbo looks like

does anyone know if that is a factory color on the green miura?

I've never seen the Alfa 33 Stradale - thanks for sharing!

that green is indeed a factory color

I'm pretty sure you left out some coverage on that McLaren behind the XJ220!!

@Hille426, you should probably tell the organisers it's not a turbo. That's what it said on the stand beside it when I was walking round too.

its like Friday night in my local nightclub.. some big beautiful beauties in here! - loving the Toyota and the British effort too.

No pictures of that red Ferrari 288 GTO? My heart aches./