For the majority of the Need for Speed team, this was their first Irish Prodrift event. Rod, Ross and Fredric had never experienced the Prodrift machine in action on its home soil. Ireland may only have one international standard race circuit and even at that only has two layouts suitable for a competitive drift event but it has never stopped our drivers’ developing to a level where they are competitive on an international scale.

Even current Formula D points leader, Dai Yoshihara, commented on how competitive and aggressive the amateur and semi-professional classes are. Dai would take part in the final round of the 2011 Prodrift Series behind the wheel of the former Wexican Motorsport SR20 powered Toyota Altezza. We featured the car way back when its build was freshly completed. It has recently changed hands and has now joined the MG Crash Repairs stable of drift cars.

The reason the standard has been set high here is because of the clear and concise instructions from the judges. It’s also a well known fact that if you stray outside these instructions, you could well be looking at an early trip home.

I’ve been fortunate enough to have been around in the early days of the Irish drifting scene. In all the years I’ve been involved, I’ve never seen a line up of drivers quite like it before, either at home or anywhere in Europe. With a spread of drivers from several renowned championships, it was always going to be a tough event for every driver who took to the track on that wet Sunday morning.

The pro class in Prodrift is run slightly different from most other major drifting series’ around the world.

As per the norm, drivers must be whittled down to a top sixteen which is done through the usual qualifying session. Each driver is given two runs only to lay down a score.

It’s after the top sixteen where things vary. The sixteen qualifying drivers are then lined up once more for one Superlap each. With no warmup and no second chances, each driver must attack the course to the best of their abilities. The Superlap not only decides the pairing for the top sixteen twin battles but also puts some championship points up for grabs for the top Superlap qualifiers.

It adds some incredible excitement to the event as nothing can be taken for granted. Although Darren qualified first in qualifying, he spun on his Superlap which put him at the bottom of the top sixteen draw.

Gavin Lenihan took perhaps the biggest scalp of the day in the top sixteen battles. Before the top sixteen had commenced, Alan Sinnott in his SR20 powered ’86 had done just enough in Superlap to take the overall 2011 championship. However, being champion allows you no easy time and Alan was eliminated at the first stage of tsuiso.

Nigel Colfer, 2010 PD runner-up was the next big name to be dispatched from the event by the on-form Brendan Stone in the recently completed MG Crash Repairs RB25 S15.

A battle that I never in a million years thought I’d see on Irish soil – with both driving borrowed cars, Dai Yoshihara advanced to the top eight after Dean ‘Karnage’ Kearney spun on his chase run.

They both run their own tuning shops just around the corner from each other in the sleepy Cork village of Buttevant, but there was no love lost between D-Mac and Damien Mulvey during the first round of battles. The judges decided after one run each that D-Mac would go through to the top eight.

In a series of battles which needed to be repeated, the two S15s of Christy Carpenter and Phil Morrisson done more damage to the atmosphere than the entire decade of the 1990s.

Phil Morrisson in the Driftworks S15 got the nod from the judges and proceeded to the next round.

A spin by Steve ‘Baggsy’ Biagioni handed victory to Dan Moorehead who would take his place in the top eight.

Fredric Aasbo only needed one attempt to defeat Mike Deane on his way to the top eight.

Heading into the ‘Great 8′, eight drivers that on any other weekend would be changing tyres in anticipation of the next set of battles were already loading their cars for the journey home, such was the level of competition.

First to be eliminated in the top eight was Brendan Stone at the hands of Gavin Lenihan. For a car that was only completed the Friday night before the event, I’m sure the MG Repairs team were more than chuffed with its first outing.

Currently battling each other for the 2011 Formula D title, D-Mac and Dai Yoshihara were given the opportunity to score an important mental victory over each other. On Dai’s chase run he was deemed to have gone off course by the judges and marked a zero. Oblivious to this, D-Mac was still at maximum attack but missed an upshift and straightened which he believed to have ended his day. However, the judges ruled that Dia made the first and biggest mistake of the two, allowing D-Mac to move on to the top four.

This mistake by Dan Moorehead gave Phil Morrisson a clear advantage and allowed Phil into the semi final.

Next up in the quarter finals was our own Fredric Aasbo versus James Deane. Deane however was having gearbox problems which left him with only first and third gear. Ever the gentleman, instead of racing away after the pace cone, Aasbo paced his lead run to allow James to keep up on the run in to turn one.

On his own chase run however, Aasbo overcooked it and ran wide and off course, giving James Deane the win.

First up in the final four, Gavin Lenihan tackled D-Mac and the NFS ’86 …

… with D-Mac taking the first spot in the final battle.

In an incredible display of determination and skill, James Deane who was still with only first and third gears, managed to defeat Phil Morrisson in a set of battles that had the crowd on the edge of their seat.

This left Morrisson and Lenihan to battle it out for the bottom step of the podium with Lenihan eventually taking home third place overall on the day.

With both drivers determined to take the last victory available in the 2011 Prodrift Series, everyone present knew that neither driver was taking no prisoners. With James leading in, the pace was somewhat slower than one would expect from the young Deane. D-Mac had to make what seemed a small correction as he initiated behind the PS13, taking him across the concrete kerbing of turn one. This action resulted in the obvious removal of the D-Mac ’86’s front bumper but it was the not so obvious consequence that provided the dramatic end to the event ….

Unknownst to D-Mac, the slight cut across the kerbing had damaged the sump and with the engine oil evacuating, it quickly lit up into a massive fireball which enveloped itself around the top of the ’86 before extinguishing almost immediately. With an oil starved engine, D-Mac had no choice but to retire and hand the victory to James.

Although we were not allowed the privilage of witnessing an epic finale, James’ win was no less deserved. An incredible drive with a car that only had first and third gear will surely go down in Prodrift history as one of the all time great drives.

Be sure to check back shortly for both Darren’s and Fredric’s version of events. 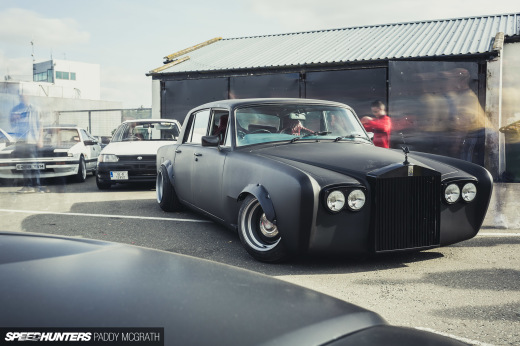 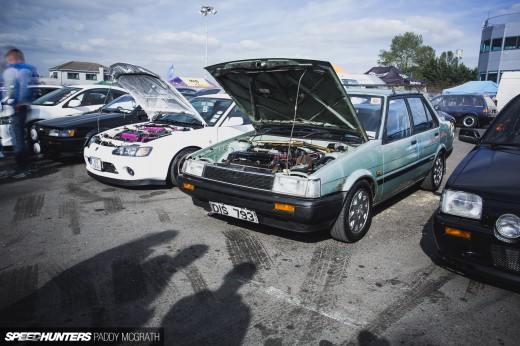 great coverage.And the line up was amzing.Will you be covering dai's visit to wembley in the 1jz skyline.

Damn, I wish there were events like this where I live, I'm a photographer and I would love taking photos of cars racing/driftin'

Dai did excellent in Altezza and Aasbo's Supra was insane ! Pity about the final and Dmac's sump...

In South Africa we have tha SuperDrift Championship With Otto Graven as tha master but thers no comparison betwn these guys our drifters... Big ups 2 them and there awesome machines

No wonder Aasbo didn't go through...

Damn, what a determination! James Deane is a hell of a man!)

Ive seen this before

D-Mac had some problems with fire 3 years ago. After all everything went well and he drove in final with Aasbo.

Here´s a the nostalgic pic of those happenings.