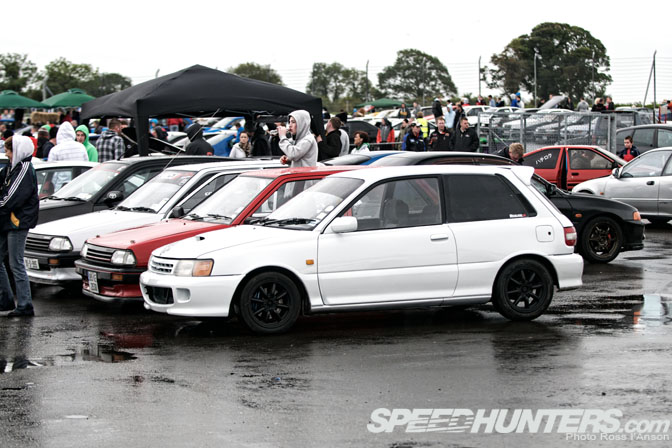 One of the first that caught both Rod's and my eye was this stunning Soarer. Unfortunately it suffered a puncture, so the car spent the day either boxed or on a jack.

The weather certainly wasn't pleasant, but it didn't stop the owners from preparing for the show and shine.

..to this super clean black-on-white PS13.

I had wondered where all the AE86 Corollas in the UK had disappeared to. Now I know, they are all in Southern Ireland. There were a variety of hachis on display from this example on SSRs…

It was Hachi heaven.

And what's not to love? Timeless.

Continuing the theme on Toyotas, I have to say that I fell in love with this street KP Starlet…

The Celica had a slightly modern twist with its engine selection. I don't know if it's just me, but there's something about retro Toyotas. I just can't see today's models gaining the the same desirability in twenty or thirty years time.

It took so long to get a clean shot of this blown RX3.

It drew a constant crowd of people throughout the show. I had to wait until the Prodrift Superlap was underway just to grab a few shots.

This 'work in progress' Civic caught my eye.

On closer inspection it had a full carbon body wrap. A chat to the owner revealed that an awful lot more will be done to this car.

Even though it was a Japanese car show, the Euro scene had a fair turn out.

This E46 brought clean to a whole new meaning.

Son of Sudsy. One to bring a tear of nostalgia to Paddy.

Only in Ireland will you see something like this. Awesome!

The wheel equivalent of a tailored black suit. BBS look good on anything!

We will be back in part two to take a look at the on-track action from Japfest Mondello.

all i want to know is where did the white chick riding shotgun in the civic with carbon splitter come from?? i guess someone imported them some USDM meat.

So pissed I missed this! Had a bloody gig in Wicklow that turned out to be a damp squib, should have skived off and hit up Mondy instead!

A bale on the farmer's favourite, the VW Bora. 'Felt spec baby!

A fiver says it was a TDI.

waits for back lash over fake wells

sweet pics dude, by any chance did you manage to snap any of my sil80, it was on the same stand as the carbon wrapped civic beside the rx7.... daithigee21@hotmail.com

Ross, noticed the 3 cars you loved are all on Rota BM8s. Coincidence?

@ nxt774, there are plenty stunning Irish & eastern European women here without having to import US beef

nice pictures dude thats my grey e30 sound for the picture did you get any off my orange ae86 by any chance ?

That AE is a bad mama*shut your mouth*

Any chance to know the colorcode of the grey trueno?

"Had a bloody gig in Wicklow that turned out to be a damp squib, should have skived off and hit up Mondy instead!"

Can I get a translation please? Preferably in English.

Those Toyotas sure do love their hayashis...at least i hope hayashis and not their rota copies.

@Michael.....what are you on about, ruin? Aus and NZ are the ones keeping these cars alive, and while a modded version like the one above may not be to everyones taste, it's better than a unique piece of not only Japanese motoring history but the worlds motoring history left to rot away!

Also, those are lovely fake BB5's, not the real deal!

Rain kept me away this year, I'm getting too old for it now. Always some nice old school stuff at this, glad to see a lack of spotlights too!

BBS looks good on anything except Benzes IMO

I'm sure West Coast Rotaries are great engineers + lovely chaps, but they need to learn how to spell... or at least how to spell their own name.

@iank the ke70 is mine, sorry but my wheels are only rotas. i apologise, lol. i dont like rota, but to be fair its a good copy. for a quarter the price.

the wheels on the starlet are genuine hayashi's and probably that celica too.and obviously u cant tell d difference i hang my head in shame, lol, i cant afford d real deal