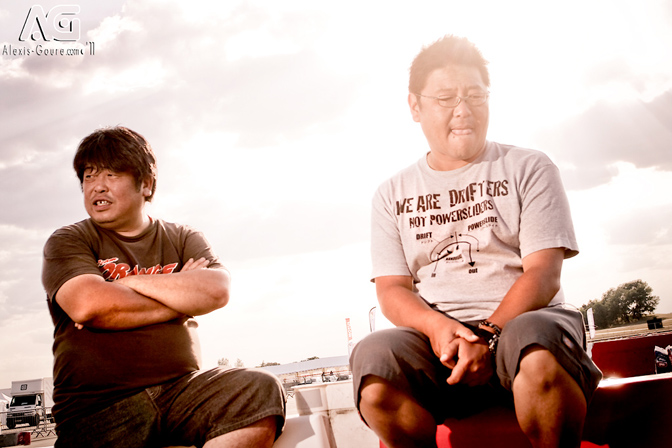 French tuning magazine Autoworks, last month decided to organize an all-new event in Paris for Japanese car enthusiasts and drifting fans. The idea was to make up for the cancellation of the Paris Tuning Show which was axed two years ago. It was decided from the get go to invite Nobushige Kumakubo, Sumika Kubokawa and Mitsuteru Igusa from Team Orange, true ambassadors of the drifting movement! Friday afternoon, while Kuma was busy focusing on the track layout, Igusa was already dreaming about some fine French cuisine. Gotta love Shihainin’s (Kuma) T-shirt: “We are drifters, not powersliders!"

Sumika took care of the “School Demo Run” where Team Orange introduced the basics of drifting. Needless to say the crowd was completely charmed by Japan's most famous female drifter!

46 drivers from France and all over the world (Australia, UK, Italy, Switzerland, Japan, Spain, Belgium, etc.) came to compete at the event. The youngest was Andre Silva, a 16 year old from Portugal!

Only a few brave drifters dare go with rotary power in France. Sebastien Lepert is one of them. He fell in love with the RX7 a few years ago and immediately knew this would be the car he would compete in!

V8 engine swaps have started showing up on this side of the Atlantic too. Benjamin Boffard’s Sileighty "tasted" more like an American Bigmac than Japanese sushi!

The bad weather on Saturday afternoon forced drivers to adjust their entry speeds. Mike Kauffmann was driving his S13 Silvia for the very first time under the pouring rain.

Amateurs displayed their stunning cars all around the paddock. Some of the best tuned cars from around France made the trek to the event.

Thanks to smooth tarmac (and also to the rain) drivers didn’t use much rubber. This particular tire however, was toast!

Clement Ponsot was driving one of the cleanest cars at the comp, a Silvia S14.5 we featured a few months ago in our magazine.

At the end of the first day, 12 drivers made into the TOP 16. The others had to fight again the following morning.

A slammed S2K showing off tasty pink wheels in front of the Ariane 4 and Ariane 5 rockets.

It’s never easy to give 100% of your potential on a new course, especially when you’re being judged by two of the best Japanese drivers out there!

Tsuiso is what drifting is all about! The maestros Kuma and Sumika showed their incredible tandem skills; I don't think they could have driven any closer!

Crazy Frenchman Matt Mekatrix spiced up the show's proceedings with his bike drifting demo run! Insane! We though drifting on four wheels was hard enough!

You have to either make the trip over to Japan and up to Ebisu Circuit to get your Team Orange T-shirt signed, which you should definitely do at least once in your life, or you can come to the Autoworks Festival!

Nicolas Cerdan’s One-Eighty not only had a torquey RB25 under the hood, but also sported a nice homemade paint job.

Taro Ishikawa traveled half way around the world to compete along with French drivers. It was his first time behind the wheel of this S13, setting it up the very same day of the comp.

The battles are the most exciting part of any drift competition. The drivers didn’t have much time to get used to the track Kumakubo had laid out for everyone, providing a real challenge for everyone.

In the Final, D1GP driver Federico Sceriffo couldn’t get rid of the Luis Lopez Mora! The Spaniard, who qualified first, impressed the judges with his fast entries and his aggressive switches throughout the day. You can see more of the close action in the official video that was shot at the event.

Luis Lopez Mora took the 3000 Euro first prize home…as well as the D1GP license Kumakubo rewarded him with! The French Laurent Goupil grabbed 3rd place. After what Japan was put through on March 11th with the big earthquake and tsunami, we wanted to dedicate this drift competition to the people there. Our magazine made a donation to an organization in Tohoku (North-East Japan). The event concluded with the Team Orange guys battling the drivers for a bit of fun. A perfect end to a perfect weekend! À la prochaine!

Love this photo style! Keep it up! Love to see something different!

haha and poor old Sheriff misses out on a D1 license again after placing 2nd..

So nice pictures !! Looks there was a lot of fun there ^^

whoa.. looks like another great event. liking the dropped Honda S2000 a lot. - as for Kuma and Sumika:- they have got skills, Video Roll was needed for that showcase! - Thanks

Thanks a lot Speedhunters and Autoworks! I'm the photographer and if you want to see more of my work, check out http://www.alexis-goure.com

no pics of my Oldie

Many thanks for this first edition of Autoworks festival !! It is not so easy to practice motorsport as an amateur in France and to see this kind of event and the spirit of the all thing is really refreshing and gives us more motivation to continue ! Keep up with the good work !

I was there,a really dissapointing event. 500km for a pretty bad organisation,and no good view on the track... It's the first time,let's see what wiil happen next year!

Saying the V8 swapped sil80 is quite American is stupid, its got a NISSAN V8 under the bonnet...

What an amazing week-end and nice pictures too.

Cheers to pilot Benjamin Boffard with his Sileighty V8 prepared in our garage.