Hollywood actor Tom Cruise has taken a break from producing and starring in Mission: Impossible Ghost Protocol to go for a spin in a Red Bull Formula 1 car.

Cruise, who is apparently quite an avid racing fan, was given a seven hour session at Willow Springs in California, completing 24 laps. F1 cars are complicated machines, so a 12 person crew was flown in from Milton Keynes to operate the vehicle.

His instructor for the day was former F1 driver David Coulthard. "I was surprised he picked it up so quickly" Coulthard said. "His recall was incredible considering how complicated driving an F1 car is."

After some exploratory laps, the team ran through the car's telemetry to show where he could improve compared to Coulthard's laps. 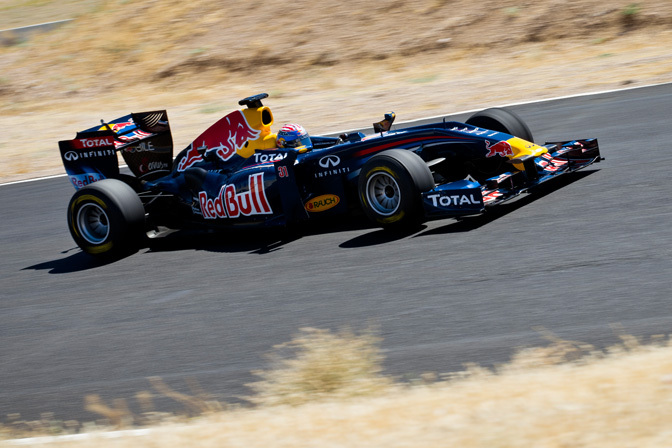 By the end of the session, Cruise had improved his laptime by 11 seconds, and was just 4mph shy of DC's top speed.

the bar wasnt set to high for tom cruise seeing as david coulthard was and still is a useless f1 driver known for making conutless mistakes in formula 1.still impressed by tom cruise he obviously has a natural talent with driving cars.well done cruise, well done.

Days of Thunder 2: From Coors to Perrier

Tom Cruise? Scientology? No thanks. Why the F... are you supporting a guy like this with this news? Speechless!

Kept it on two wheels at least.

Who knew!? :))) Cruise could've easily had taken a different career path. If this is what he can do in 7 hours in a new environment and a new car, imagine him doing so for years since his early days! Maybe a dormant racing legend in there, another God of Racing after Senna? Who knows, a man only gets one life and if he was a racing driver, we wouldn't have Top Gun, Tom Cruise, Mission Impossible and all the rest.

Props to the guy, though... How many people, especially movie stars can pull these kind of things off?

BTW, dude was one of the top fastest stars on TopGear tv show! See where I'm aiming?

Tom Cruise is the BEST!

Whenever I hear about people driving F1 cars, I recall Hammond from TOP GEAR UK freaking out when he drove one. I think he screamed thru the whole lap.

Must be nice to be rich and famous. Hey Tom, If you're reading this, Kick down a few thousand. I need to make rent for the next few months.

Lucky guy, he should of popped it on two wheels though just to show the world it wasn't a luck on top gear

Once again, TC demonstrates the power of Scientology.

I hate being a middle class peon...

I think he still (Tom Cruise) holds the record on Top Gear's fastest lap by a Celebrity.

@ Max Scientology? Whats wrong with Scientology? How about supporting a religion that has persecuted and murdered millions of so called non believers. Scientology has not really hurt anyone the way other religions have and their based of as much fairy tale as Scientology is. BTW im not a supporter but i support peoples free will to worship whatever they want no matter how crazy it may sound.

wtf is this supposed to be? Speedhunters where are you going?

Tom Cruise used to be a race car driver, so this isnt surprising.

Did he just call up the Red Bull F1 team and ask if he could drive one of their cars? I'm a bit confused...

@Truth: I'm sorry but this is bullshit. You're right about not supporting a religion that has persecuted and murdered millions of so called non believer. So I pretty much could only support buddism, if i would believe in something higher. But i don't. Anyway, saying scientology has not hurt anyone is just wrong. We learn a lot of all type of "religions" here in germany. Scientology is not a religion here, its a sect/cult and they're forbidden to call it a church. And this is definetely for a reason. There is a lot going wrong in that cult but this is the wrong site to complain about that. Im just saying, you shouldn't have a platform for extremist people like him.

I got the need for speed! Maverick!

I got the need for speed! Maverick!

who cares if he is a scientologist!? What were the man's lap times!!!??? Curious to see how this car did

or prolly just burning spare money from the bank. we weill never know..

I Hate Tom Cruise. Why did they let him ride in the first place......

C'mon Speedhunters. You guys are above reporting this shit. The guy is a knob, it must be awesome to be a rich dick like him. How about more retro F1, not a story on some weirdo.

WHY YOU DRIVE F1 CAR FAST WITHOUT EXPERIENCE?

cole trickle back at it. toms a beast stop hating jabronies

Following on from our article on Hollywood actor Tom Cruise's recent drive of a Formula 1 car , Red

Hea, this is useless without lap times.. couldn't we get an idea what they ran out at Willow?.

john and j.clarkson, JUST A PRANKSTER FROM Estoril Circuit, Portugal

Ok, honestly, I'm jealous. I'm positive I have more driving experience than Tom Cruise as far as racing goes, and could probably learn to drive F1 a lot better than him. I guess money IS everything.. I will say this, he still has that killer top gun stare behind the visor of that helmet. Awesome pic. A$$h*le hahaha

Good chance for web pundits to discuss religion....and haters to hate on DC and Maverick lol.

HeY john, TAKE A WALK ON THE "REAL" SIDE! LEARN FIRST, AND THEN YOU AND YOUR CRITICISM ARE WELCOME. TILL THEN...DON'T BE AN a#s, OK?

From PORTUGAL,With Love,and OTHER STUFF

Don't confuse religion with cult membership. Tom Cruise is a former Catholic who now belongs to a cult.