Ford Fair – the largest Ford show in Europe. It is without doubt my favourite static event of the year (there is on-track action but it's primarily a show and shine). It's just one of those events that I look forward to all year round because there are a couple of things you are guaranteed each year – so many cars on display that you won't know what to do with yourself, a lot of high quality and extremely detailed builds, some controversial builds and a chance to meet like minded Ford lovers and talk the talk all day long.

My own love of Ford comes from my family, in particular my father and uncles. Even though I've never even owned one, I know that one day the car that will sit pride in place in my future garage will have a blue oval on the front of it. 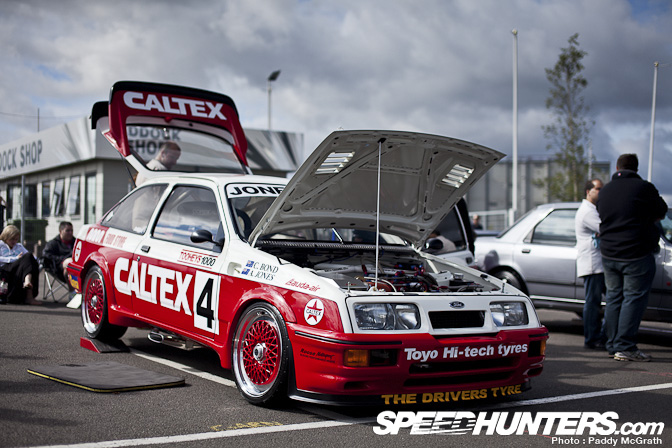 Ford is one of those rare manufacturers that has never been shy when it came to motorsport – no discipline was safe from the blue oval and they always pushed until success was reached – Rallying, touring cars, Le Mans, F1 and the list goes on.

It's no wonder that once a year, Future Events can fill out Silverstone with such a huge event and attract Ford lovers from all over the world.

This MKII Focus RS is the world's first 4WD version.

This carbon bodied Anglia is being built to perform 200+MPH in the standing mile. Spotlight shortly on this one.

This is a Ford Saxon. You've probably never even heard of one of these before and it's for good reason. It never went into production and the prototype was scrapped. Only one photograph of the car survived and one dedicated (understatement of the year) man decided he would build his own Ford Saxon from that one photograph. Words cannot explain how incredible this is.

Ford Fair is one of those rare events where all different approaches to our automotive world come together under one roof and are all appreciated equally.

… this original RS200. I just can't imagine this ever happening at a show for another manufacturer. A true collision of so many different sub-cultures of our automotive world.

This Ford GT1 car was left loose on track on a couple of occassions, reminds me of how much I miss shooting the GT1 cars. The noise is just indescribable.

… to touring car replicas. This was a show not just for Ford fans but for those who can appreciate all walks of the automotive world.

The event even came with its own Bryn Musselwhite !

I'll be back shortly with part two along with more spotlights than I know what to do with.

Tucked At The Park On A Late Summer Sunday

Just to let you know, that is not a GT1 Ford GT. Actually, it is a GT3 spec Ford GT; built by Matec, I believe. Still, great story, can't wait to see more!

the saxon is feature-worthy.

That van is dope!

Great write up, and loving the cars!

ONE QUESTION: What WHEELS is the Castrol Mk1 Escort wearing?? some sort of awesome meshies.....

"they always pushed until success was reached - Rallying, touring cars, Le Mans, F1 and the list goes on."

Really? when was Ford successful in F1? Lats time I remembered the Jaguar program was a flop

" Ford Saxon from that one photograph"

that is just awesome - surely he has a build log!!!

Yes both GT1 and GT3 Ford GT were built by Matech before it folded after the death of Martin Bartek. May he rest in peace.

Spotlight on that NAZZTY lookin red van? That ish is teh sickness.

respect is due.. must of us old-school Dubbers [from up North] do have respect for the Ford boys - i love the RS's. the MK1 & 2 Mexico's are always well presented. liking the RS200 and even the Transit looks wicked.. definately not a 'white-van-man' - are they deep-dished AlleyCats on the Castrol Mk1 Escort? -lets see some MK2 RS2000's & XR4i's please (?) - Thanks for this post!

@HMM: The Ford Cosworth DFV V8 engine was quite popular in F1 though...

That Transit is BALLER!

Beautiful Fords, and interesting point about the multifaceted history of Ford motorsport and enthusiast subculture. It really is multifaceted- from the Escorts in touring car racing (in a market segment dominated later by the Japanese at least in the US), to the LM-storming GT40s, Ford Mustangs for your standard American muscle car drag racing, the late RWD holdouts in Australia (place is like the land time forgot, figures they'd have egg-laying mammals).

The Saxon: a neat idea, but in execution it looks like an Austin Healey Sprite or something. It's too stubby. The picture of the prototype is a lot more rakish and low-slung, and more attractive. BTW, what is the interest in the Saxon- just that it was a compact sporty coupe decades others took that formula to the lower-end market?

Spotlight on that Transit, please.

Any more info on that 4WD MK2 Focus RS? On another note: what an epic event! So many astonishing cars!

FMR Bryn is such a camera tart.

Spotlight on the Saxon PLEASE!

It has to be an all time favorite car of mine and i'm currently in the process of trying to acquire the bare requirements and build a proper beast of a car and i love what he's done to that car so i'd love it if you could do a spotlight on that one! if you could, pretty please?!

There's a variety because it's Europe. There's no variety in America.

its my mk1 and its in classic ford next month , thanks for the connents

Graham, your car looked awesome and the article in Classic Ford is a cracker

Can you help me trace Ovx973d ,I'm the original builder and would LOVE to see it again. Mk1 cortina flip front, thanks terry