X Games 17 has come and gone. It was a weekend filled with all sorts of extreme sporting.

Motocross, skateboarding and BMX aside, we're here for is the RallyX action.

Whoever thought about placing the RallyX course in the middle of downtown Los Angeles is either insane or a genius. A small and tight street course with 8 rally cars driving head-to-head against each other? Now, that's how you make good television.

…as one of his mechanics looked on.

Brian Deegan took a nap on his leg just before the practice began.

This is the interior of Deegan's Fiesta. Notice the flocking on top of the dash.

Robbie Maddison's Hyundai Veloster has seen quite a bit of action in the short amount of time it's been running the streets of Los Angeles.

There were quite a few Formula D drivers in attendance at the X Games. Vaughn Gittin Jr. was one of those. Will there be FD drivers joining the RallyX fray next year? Only time will tell.

You know you're in the privateer paddock when you see a driver under  his own car. That in itself garners massive amounts of respect in our book.

Stephan Verdier was having car problems all morning during the practice sessions. First, he landed a bit too hard while practicing the jump and broke an axle. Next, he gave the wall a love tap that was a just a bit too close for comfort. Luckily, his team was able to put the car back together in time for the 4 car group races.

The previous day's event winner, Liam Doran, headed out onto the track for the morning's practice session…

…and as did Dave Mirra.

When I mentioned that the course was extremely tight, I meant it. These cars only have so much space to navigate through.

Seeing Rally cars snort, pop and slide around the streets of LA was an amazing sight to see. Travis Pastrana was one of those drivers that never let the fans down with the flamboyancy of his driving.

He also practiced his acrobatic skills.

During one of Block's practice runs, Ken tapped a wall damaging the front passenger side suspension rather heavily. Luckily, his team was able to put the car back together for the 4 car heats.

One of the cars to watch was Michael Jernberg's Skoda. It was one of the most competitive cars throughout the weekend.

Right from the get-go, the racing was intense and very close.

But through thick and thin, Marcus Gronholm was able to walk away with the Group 1D win.

Semi-Finals Group 1C was up next with which pitted Liam Doran against Michael Jernberg, Joseph Burke and David Higgins.

The Group 1C heat took the "rubbing is racing" motto to a whole new meaning. Liam took the win for that heat.

Tanner Foust drove like he knew best and took the win to move on to the quarter finals.

The quarter finals started off with an all star line up of Ken Block, David Higgins, Dillon Van Way and Rhys Millen.

The second quarter finals race pitted Dave Mirra, Robbie Maddison and Michael Jernberg. Jernberg drove his Skoda a bit too hard and hit the wall at turn 1 and was unable to finish the race. Mirra walked away with that heat's win.

The third and final quarter finals match up was with Travis Pastrana, Jimmy Keeney, Nathan Conley and Joseph Burke. Pastrana took the win for the heat.

The last race before the 8 car final put Rhys Millen against the likes of Joseph Burke, Dillon Van Way and Jimmy Keeney. Millen walked all over the competition.

The privateers put up a good fight but in the end, the fight just wasn't strong enough. There would be no privateer cars in the final race of the day. 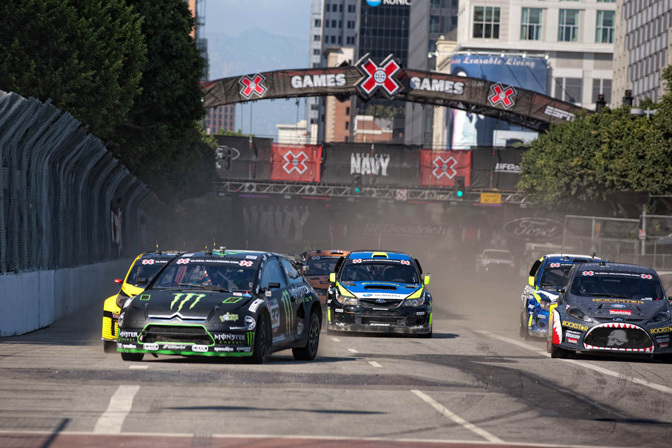 The last RallyX race of X Games 17 was an 8 car all out race to the finish. The 8 lucky souls to get this far were Liam Doran, Tanner Foust, Brian Deegan, David Higgins, Travis Pastrana, Marcus Gronholm, Dave Mirra and Rhys Millen.

But when you have a field of eight cars that are roughly same in competitiveness, there's a whole lot of changes in position and lead throughout the race.

The final heat of the day got a bit too hot and on the last lap, Travis Pastrana slammed into the tire barrier at turn 1.

Before the accident, he was holding third position, but lost it to Marcus Gronholm.

Brian Deegan walked away with the overall win on Sunday with Tanner Foust taking second. What better way to celebrate than to light up some tires?

You can watch the Super RallyCross finals highlights here.

This year's RallyX at the X Games 17 will definitely be a hard to one to top. The only way the organizers can top the all the action that the streets of LA provided is to add more jumps. We'll just have to wait a year to find out what's in store for next year.

i think it's awesome dude.. 'Go Tanner!' - i don't usually crib or moan at typo's but "Tanner Foust drove like he new best and took the win" come on now, keep up the high standard of professionalism that i love about this site. Please!

No mention of how Pastrana was even driving in this? Its something to note. He was using hand controls for acceleration because he has a broken ankle. He was already hurt long before he put it into the wall... notice the cast...

LOL what do you know, Ken crashed another fiesta during shakedown

Suede on top of the dash? That's not for luxury, it's for keeping reflections of the dashboard in the window down.

Suede on top of the dash? And luxury? Come on now, the dash is "flocked" NOT suede and there for a reason. Non-refective dash as per "Geert" said. haha suede, classic...

The suede is definitely for the reflection purpose.Nothing luxury about it

definately one for the bash & crash posse.. looks "dangerously fun" tho'.

I got free tickets thanks to HMA. Great to see some for the first time, and brought pops along too. So many hot ladies and bros with flat brim hats around lol. Nice event.

Just to note, Pastrana broke his leg/ankle in best trick and the Subaru team had to fabricate a hand throttle for the race. He drove with his ankle taped to the bulkhead... not exactly sustaining a "light leg injury" during his crash.

"He sustained a light leg injury. " Travis actually broke his ankle and foot during best trick. Was an awesome race though.

A clean drive from Deegan. It was a pity about the first corner contact as that took the two I was expecting to be fighting for the lead out of the equation. Such is rallycross though!

Block has to be one of the unluckiest drivers in existence, especially at X-Games! Plagued by mechanical gremlins, AGAIN. Having said that, it seemed an odd time to debut his (rather pointless) new car. Why not stick with one of the tried and testing MSE rallycross Fiesta's?

Despite them failing to get a podium in the rallycross this year, I thought the Subaru's looked way more competitive then they have in previous years when compared to the Fiesta's (and other purpose built rallycross cars). Glad to see that Subaru USA are catching up with the more experienced rallycross car builders.

Too bad Deegan is a huge racist prick. I don't care that he recently "found God" or whatnot. Doesn't change his past comments. Amazed at Pastrana fighting thorugh the pain. The in-car camera showed just how much pain he was in when he hit the wall in the finals. crazy.

Guys where the heck do you see him saying that it's a luxury? all he said was "This is the interior of Deegan's Fiesta. Notice the flocking on top of the dash. " Come one guys stop being critics and enjoy the coverage, I swear there's always a critic who thinks they can do best. I ask you guys criticizing Linhbergh for his typos or lack of content, what proof do you have you can do better? last time I checked he has the job of a lifetime and you don't, so be quiet please!!

Bad move by Tanner Foust on Liam Doran's car at the first corner...

This write up is a little deceiving if you didn't watch and knew what happened. In the final, Doran started off strong.....all the way to the first turn where he was hit by Tanner and was out of the hunt from there on out. Probably worth mentioning Travis had a shattered foot/ankle and was driving with hand controls too.

Liam didnt start off strong,tanner spun him out...

I want to participate in the xgames hehehehe

@ Eli, No malace so chill. Linhbergh has great coverage as always. Oh how i envy! And your abit late, he had changed the comment from the orignal to the one you mentioned. Huge probs to Linhbergh. Luxury suede, haha classic. Now you be quiet.

@Pedro, Thank you sir for pointing this out. I cannot believe that he did it in the first place...but as long as he had fun I guess. That man is a legend.

Gronholm, Doran, Higgins. No wonder they all won their heats, they are the only real rally drivers !

Thanks for Skoda photos. Its nice to see our cars here.