I really don't know where the year has gone. It only seems like yesterday I was preparing for the upcoming Drift season, I've blinked and we are now three quarters of the way through it.

Of course that means it's time for the annual visit across the boarder to the superb Knockhill circuit for round four of the British Drift Championship.

Definitely one of the more challenging circuits on the calendar. The 100mph 'leap of faith' blind entry over the edge of Seat Curves..

.. To the massive flat in third gear compression of Leslies..

..then try to scrub off all your speed for the hairpin at Scotsman. Challenging? Yes. The makings of an amazing round of drifting? Always!

There have been a few changes to Knockhill since my last visit. The main one being the MSA's deterrent of corner cutting, A large raised curb on the inside of the existing curbs.

These new curbs proved quite spectacular..

..but gave an instant zero points if touched in competition.

The event was not scheduled to start until 1pm Saturday, so everybody had plenty of time to prepare for the upcoming event.

Or just to have a good look around at the cars before they took to the hill.

Head scrutineer Malcolm Fosgate has his work cut out with the 60 or so cars to check over.

Mark Buckle explains that he only wants to see one thing.. Awesome drifting.

Judges Mitch Clarke, Rich Newton and Julian Smith break the track down so the competitors know exactly what they are going to be scored on.

The pits being quite a walk from the track personal transport to get around was a must.

Even the media brought they're own modes of transport.

There was no rivalry, honest.

Knockhill is a fairly unforgiving place. A slight misjudgment of your line results in a trip to the gravel, if you're lucky this can be a minor trip just skimming the edge..

..Or as Jamie Kenyon found, a massive seat pinching, aero removing indecent as you plummet down the steep side of the gravel trap.

A little battle scared after the high speed excursion but nothing a few cable ties can't sort out.

With the top eight qualifiers heading to the hill for the finals.

I just love this immaculately prepared and supercharged 330ci. 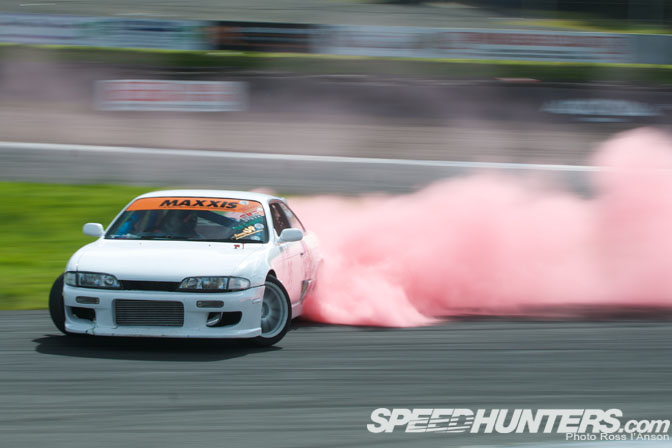 I just cant make my mind up on colored tires. But what ever my opinion they certainly draw attention.

As was Steve Moore, throwing in some massive fully committed entries.

Steve Biagioni was finally getting to grips with the Japspeed Subaru, putting in great runs.

Most of the cars competing in BDC are predominantly Japanese. It's great to see Jeek and the big 540 E39 out there and getting results, 10th place in qualifying.

With Saturday's paractice drawing to a close thoughts turn to Sunday's main event. I'll be back in part two with all the goings on.

Awesome to see an S2000 drifting

love the look the of the MX-5, with the exhaust poking out the back of the rear bumper! also like the yellow Honda S2000. i wonder what supercharger the BMW 330Ci is running? - the 'No Wheels Off Track' note made me smile. - Thanks for the coverage. bring on the Main Event..

any chance of an article on that roadster? As a fellow NA driver I always love seeing drift spec cars.

Ok i just have to ask this i notice most of these car have COSWORTH stickers on dose the mean that the COSWORTH brand is getting involed with drifting (ie building engins) or the team/drivers just putting the stickers on for looks?

The roadster is mine, an sr20det powered one :D. I'd love to do a full article on it if any one is interested. Cheers Ross for the pics and mention.

Cosworth are one of the BDC championship sponsors so all the cars have a sticker at the front. Also, as the name might suggest, the Sats Cosworth Supra driven by Mark Luney has a custom Cosworth engine.

Well u guess it is only appropriate that I answer the above question given that I am the guy responsible for all the Cosworth stickers on the cars. The answer Kev is yes Cosworth are very much involved in drifting these days and in fact have been for the last 4 years! We are series sponsors of both the EDC for the last 3 years and now the BDC this year. We build and supply many high performance engines and a large number of competitors use our parts in the own builds. We also sponsor the double European Drifting Champion Mark Luney and this year have built the 800bhp + engine that is running in the SATS Cosworth Supra. Hope that answers your question

As always GREAT write up and Pics Ross

Cosworth are a series sponsor for the British Drift Championship, but as stated above they also sponsor the SATS Supra and Team, the have developed some 2JZGTE parts that we have been testing for them in our engine, which have worked out so far great.

Bloody hell the write up was crap. "They're" for "Their", "indecent" for "incident", and so on. Get it together, man.

Wasn't that the Subaru which was stolen? I'm guessing it was recovered