The Slovakiaring’s paddock was teeming with car-spotting opportunities over the weekend of the FIA GT3 races, with a packed supercar parking area adjacent to the pits plus the attractions at numerous displays around the track. And what a supercar display there was! Each GT round has been playing a game of who’s-got-the-sauciest-cars – Silverstone’s Lamborghini Aventador and Paul Ricard’s Aston One-77 (and US muscle) for instance, but Slovakia provided that and more. The rarest and fastest, backed up by some brutish British grunt and local heavy metal, like this K-1 Attack.

?The rare and fast? It doesn’t get more rare or faster than the lesser-spotted Bugatti Veyron, which left everything else to bask in its reflected glory. 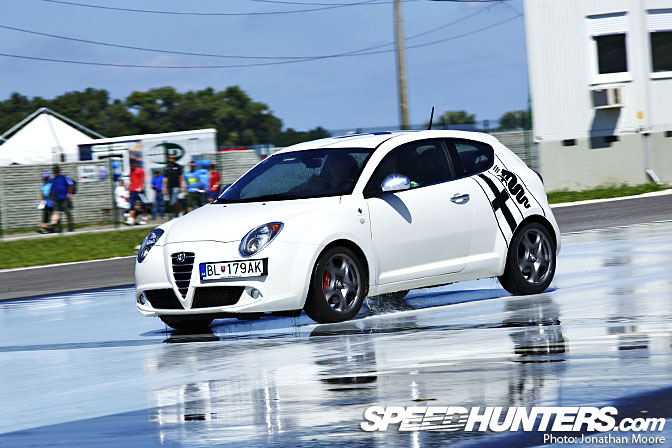 When racing isn’t scheduled, the track is kept busy as a training facility for motorists: there’s a skid-pan and driving academy track just by the entrance. 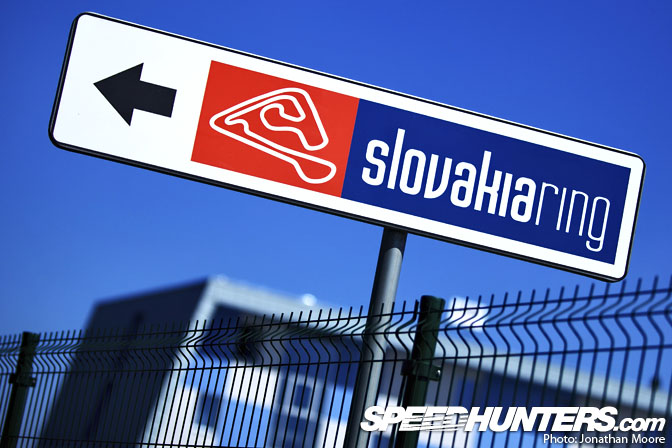 And then the motherlode is just round the corner: the track itself. There are six different variants of the track layout that can be used, and they can all be run – uniquely perhaps – in both directions! The layouts range from the simple outer 3km triangle to the near-6km full track shown on the track sign. 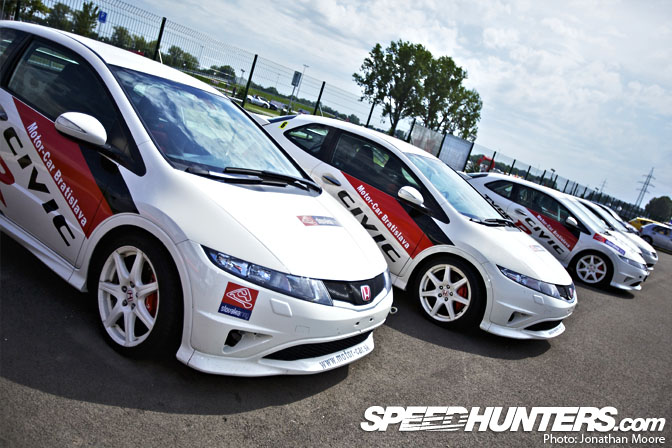 This place really is a driver’s playground. Bored of a Summer evening? You can run round the track into the dusk in your own car, or take out one of the track’s fleet of Honda Civic Rs for an instructor-led blast. 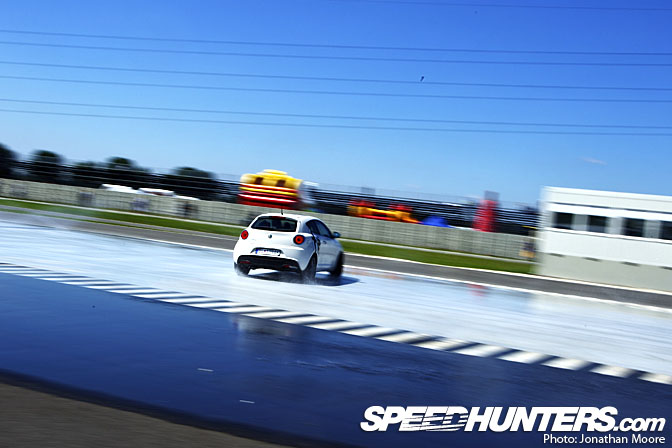 The skid-pan and wet-driving track were doing a brisk trade in allowing drivers to try out a selection of Italian mounts either round the half-wetted circle or brake-testing through the sprinklers. With the skid-pan, drivers gradually increased speed on each tour, but each time, no matter how carefully and slowly they thought they were going, the car always kicked the tail out to varying degrees as soon as they went above walking pace. However, the brake test was an even starker reminder of how lethal wet roads can be. 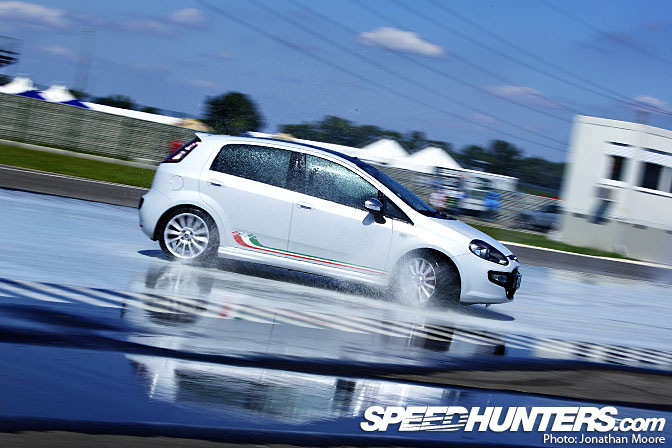 The duo of Alfas (Mito and Giulietta, plus this Fiat) approached at walking pace to the sprinkled track, and as soon as the brakes were touched in combination with the the smallest amount of steering input the cars would immediately execute pirouettes. The fun was then guessing just how many spins the driver would put in before recovering and sheepishly driving back round the perimeter track and handing over to the next willing victim…

Whilst this was happening, across the support paddock you could grab a hot ride in this Evo around a short track: just two straights, but one higher than the other, giving a nice diving and tightening exit to the finish.

The Evo appeared to be alternating with this shiny E30 in taking passengers round the lap. The beer tent next door was doing a brisk trade in calming down people’s nerves after they got out…

The support paddock held the touring car element of the regional FIA series that was racing on the bill with the FIA GT3s – SEAT Leons, Alfa 156s, Clios and the like – plus the local single seaters and Radical lightweight sportscars. British manufacturer Radical had shipped over an extra half dozen or so cars to support the local championship; I did like the fact that a number of the Czech cars were liveried up to emulate classic paint jobs: this ‘Ferrari’ was next to a car with svelte Martini stripes.

There are a clutch of Radicals based at the track alongside the Civics. And then there’s another choice… Yes, taxi rides are also available in the 0-60mph in 2.6s rocketship that is the race version of the K-1. This particular street car (if that’s the right word) was actually for sale: there were a couple too many zeros after the Euro symbol to be able to put it down as expenses, unfortunately.

My one and only sighting of a K-1 prior to this had been in passing at Le Mans – identified of course by you Speedhunters readers – so it was good to have the chance of a closer look. Reading up about the car on the K-1 Engineering website, what’s so great about this 3L-V6-powered car is all the stuff it doesn’t have. No ESP. No ABS. No cruise control. Flappy paddles. Oh, and weight: it’s only 980kg. I quote: “The car relies on its driver”. That’s the spirit. Other supercar manufacturers should take note.

The OT-64 eight-wheeled armoured personnel carrier was a joint build between Czechoslakia as-was and Poland dating from the ’60s, and is still in service today. So easy to drive even a child can manage!

And it had a kick-ass stereo system in the back.

Down at the other end of the paddock, this T-72 stood guarding the gate alongside a BMP and MTLB. Pity the Mercedes driver who parked there. That’s a brave thing to do.

My military-themed joy was made complete by the hotel I was staying in having an underground car-park that used to be a nuclear bunker – complete with two-foot-thick blast doors. The narrow entrance was not fun to squeeze through…

This particular hotel had been completely taken over by the FIA GT circus, and the lobby was flooded with team and series personnel. It looked like someone got to park their California inside the hotel… Stephane Ratel perhaps?… 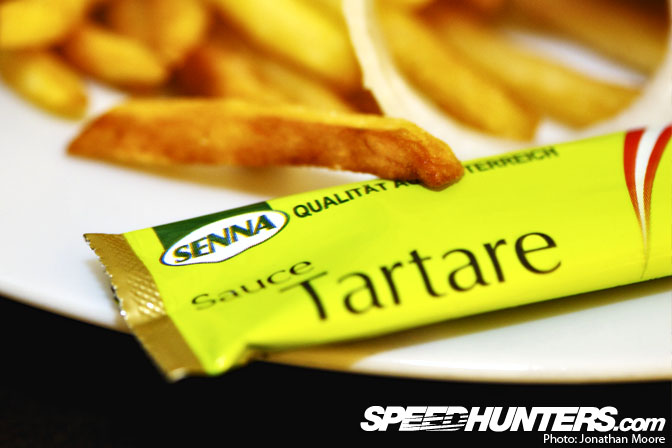 A loose segue back to cars: themed room service, with tartare sauce by Ayrton?

Something more sensible: a Skoda 120s in rally trim. Rear wheel drive, and regular class-winners in the 1970s. Although Skoda is based next door in the Czech Republic, Slovakia is itself actually a major car producer, with VW, Kia and Peugeot/Citroen plants in-country.

After recent international success ice hockey is big news: so it was no surprise to see a bumper sticker supporting the national team.

Scouting round the car parks on the first day, I was mostly drawn to this mighty Cobra.

I love the fact that this brute of a car was born from the diminutive AC Ace, and how the steroidal Cobra became bigger and bigger with each iteration. Another great example of Anglo-American automotive integration.

The red paint continued into the cockpit, perhaps making it a bit of tiring on the eyes after a while… but still, with the sound this makes it’s not like you could ever be invisible. Still my dream car.

Parked up next door was another popular British export: a Caterham Seven. My favourite driving moments have all been in one of these: the most visceral, grounded driving experience you can have, I reckon – and one of the most affordable! 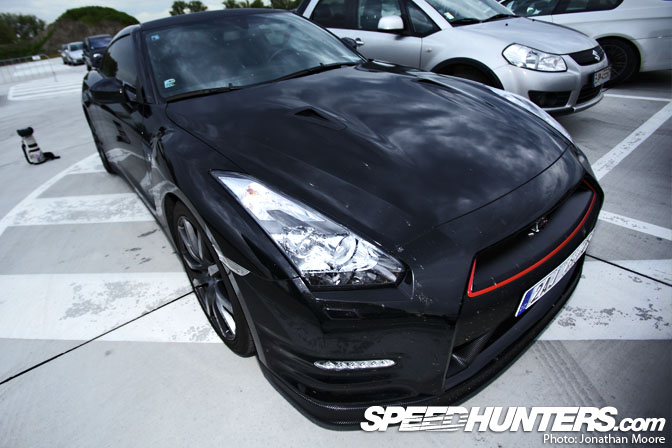 As usual there were a swarm of R35s about, this one the pick of them, particularly for the subtle red detailing around the radiator intake.

…which was in turn complemented by the carbon aero front and back. Nice.

More carbon was on show nearby on this Audi. The only bad thing about the two-tone look is that it always reminds me of provincial UK taxis… However, this A4 did have good poise and nice rims. 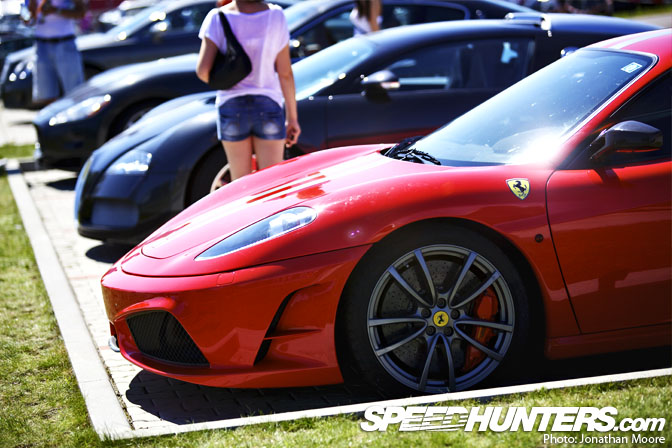 As the weekend progressed the displays filled up with the invitees: mostly an Italy v Germany affair.

On the one hand Lamborghini and, of course, Ferrari, with a smattering of Maseratis. This Gallardo proves that stripes always win.

It seems a bit of a strange thing that engines are always so prominently displayed in new cars – much as they’re beautiful things, to me the 360s and 430s…

…come second to the subtler, more measured lines of the 550s and 575s that preceded them.

The flared arches and gnarly wing of a GT3 go some way to brinbing the race heritage of Porsche to the road. 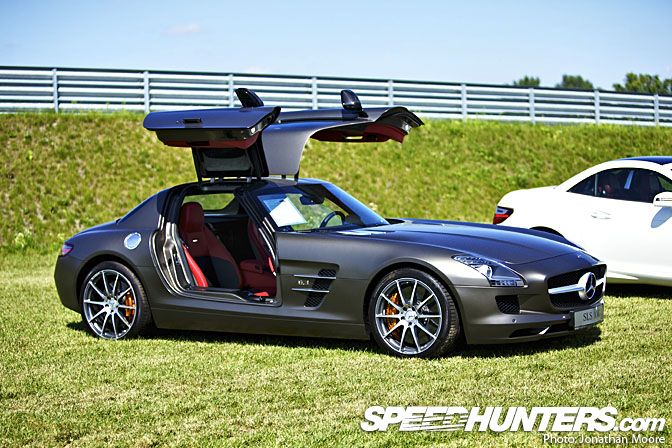 Whereas the SLS presents a very different proposition in comparison: an old school cruiser, front-engined and a worthy take on a peerless original. 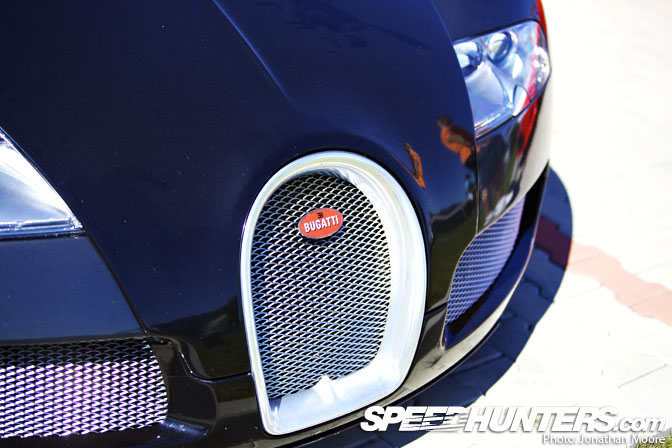 Unsurprisingly, of all the cars that were drawing the crowds it was the Veyron that people paused at longest.

It’s still just that kind of car: much smaller in real life than you might think, but with lines that I think draw inspiration from legendary Land Speed Record racers – Bluebird anyone, or is that just me?

And no, I can’t pick any holes in this particular engine being in display. Its W16, quad turbo-charged engine is just too big to fit under any cover. This is an engine with a steering wheel and a crazy person at the wheel, as with any proper LSRer.

The perfect end to my trip was provided by none other than Austrian F1 legend NIki Lauda, who put in an appearance at Vienna airport. Just as I was filling up the hire car he loomed into view from the other side of the pump, causing, I have to say, quite some shock on my part. My tired brain slowly adjusted to the reality. Still, it was the thought that counted. 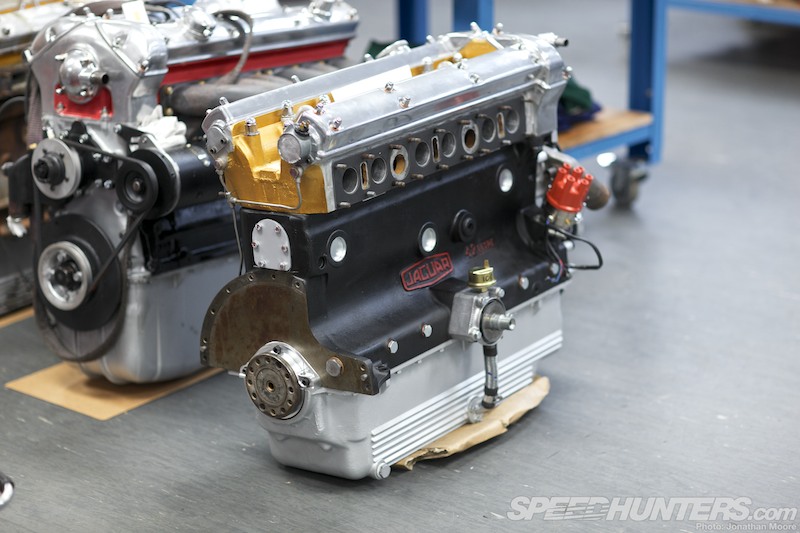 The Process: Inside The Engine Hospital 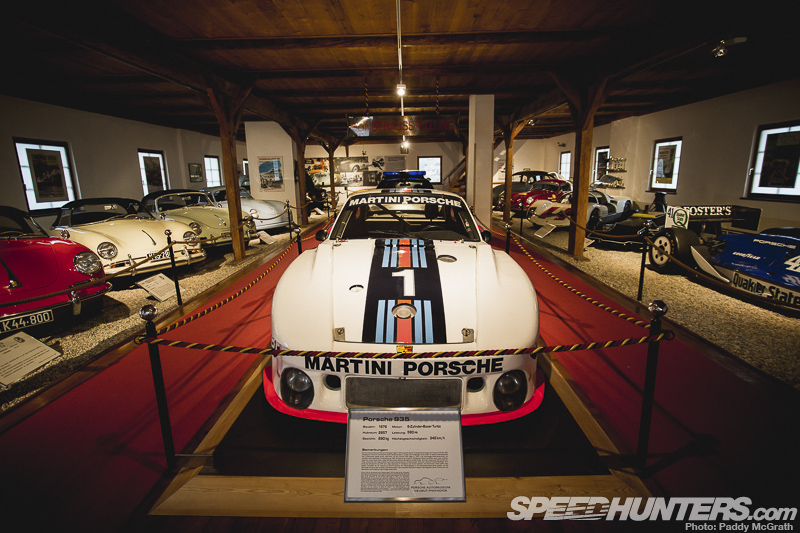 what is the car in the very first pic, it looks very familiar but just cant put my finger on it?

The best thing about the OT64? Its completely street legal.

both the gtr's and audi's carbon looks like a vinyl wrap

I was born in Czechoslovakia,thanks.

green E30 is electrical, made in croatia

And please feauture my spaceframe Skoda 120RS, its a one-off and powerd by a middle mount - carburated V8 4.2l from a Audi S8.