While certain events on the Formula 1 calendar, such as the Monaco Grand Prix, carry more prestige, amongst the drivers it is the Belgian Grand Prix that is often the one they want to win. With its tricky conditions and fast, flowing layout – which includes Eau Rouge and Blanchimont, two of the world's most challenging corners –  Spa-Francorchamps is regularly touted as a track that separates the men from the boys.

The Francorchamps area of Spa, Belgium is notorious for its changing weather, and this year's Grand Prix once again saw inclement weather.

Both practices sessions were wet, as was qualifying. Bruno Senna, nephew of the late Ayrton, surprised many by qualifying his Renault in seventh spot. This was Senna's first race for Renault, having controversially replaced Nick Heidfeld.

This year's Belgian GP marked Michael Schumacher's 20th anniversary in F1. Schumacher's F1 debut occured at Spa in 1991, when he shocked everyone by putting his Jordan onto sixth on the grid.

Many of the F1 drivers joined him in the Paddock for celebrations. It's worth noting that Schumacher's 20 year F1 anniversary includes the three years he spent in 'retirement'.

The hot topic before the race start was tyres. For the wet qualifying, the Red Bull Racing team – along with other teams – ran extreme front camber outside of Pirelli's recommendations, which led to blistering. With high-g corners such as Eau Rouge, there were concerns that these camber angles could cause catastrophic tyre failures. Under parc ferme conditions however, teams are not allowed to alter camber, so RBR and the other teams were faced with rolling the dice, or making the setup change and starting from the pit-lane.

Initialy there were discussions to allow the teams to have more front tyres – in fact 17 were flown in overnight before the race – however this idea was abandoned as it would set an unusual precedent. F1 fans will remember the fateful 2005 race at Indianpolis, where all of the Michelin-shod teams withdrew over tyre issues, leaving just six Bridgestone runners to take to the starting grid. Thankfully that was avoided this time around!

Red Bull elected to start the race as usual, instead pitting early to swap tyres. Off the line, Australian Mark Webber – who was celebrating his 35th birthday – had a disastrous start, with his RB7 switching into anti-stall mode. You'll spot the yellow nose of Webber's car way back in the field having started in third.

Nico Rosberg meanwhile, made an incredible getaway, leaping from fifth to second after the first turn. Along the Kemmel Straight after Eau Rouge, Rosberg leap frogged Vettel for the lead. Eventually Rosberg would finish the race in sixth.

Lewis Hamilton had a weekend to forget. While trying to overtake Kamui Kobayashi going into the Les Combes chicane, Hamilton retook the racing line prematurely, sending him into the barriers.

The Ferraris showed plenty of initial promise, with Alonso and Massa at the pointy end of the field. Both drivers had a fantastic scrap – although I'm sure the Ferrari pit wall would have been cringing – with Alonso leading at one point in time. The Ferraris unfortunately suffered on the harder compound tyres, with Alonso eventually finishing in fourth.

Michael Schumacher's 20th anniversary celebrations didn't look like they were going to plan. A wheel came off during qualifying, meaning the seven-time World Champion would start from last on the grid. In arguably his best race since his comeback, Schumi battled his way up the field, passing team-mate Rosberg and finishing in fifth.

Jenson Button was another World Champion who found himself down the pecking order. A curious miscommunication with his team meant Button would start from 13th, after slowing down in qualifying because he thought there was enough time for another flying lap. On the opening lap of the race, Button then suffered a damaged front wing but held on for it to be repaired during his pit stop. In spite of the dramas, Button steered the McLaren onto the bottom step of the podium.

The two Red Bulls ran different strategies. Both pitted early due to blistering on their tyres, with Webber then opting to run the harder compound. After recovering from his terrible start, the Australian was in contention for the win. When the safety car was deployed for Hamilton's crash, Webber tried radioing his team to ask if he should pit, however confusion meant he stayed out on track. Webber would cross the finish line in second.

The winner, yet again this year, was Sebastian Vettel. The young German drove another flawless race.

Will anyone be able to stop Red Bull Racing's dominance this year? Vettel is currently 92 points (in F1 each win earns 25 points) ahead of his team mate Webber. Mathematically, Vettel can wrap up his second World Championship by this time next month at the Singapore Grand Prix.

Following on from our recent Rules & Regulations discussion, we'd love to hear your thoughts on their role in this year's Grand Prix. There were certainly some exciting moments going into Blanchimont, but did it make passing too easy on the Kemmel straight? 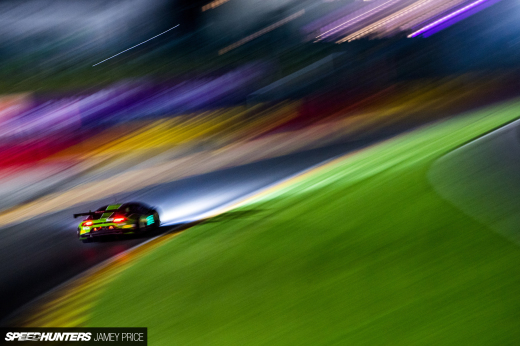 Vettel might not have been able to win if he hadn't had the ability to easily out drag everyone he needed to pass using DRS. DRS gave way too much of an advantage for this race I beleive.

spa was a great race this year

button seems "to get it" when it comes to these tires, and just charges to the front

schumacher had his best race since his comeback

Was there !!!! Shame about Hamilton though

I don't believe DRS, in this circumstance at least, made it too easy. Every pass with DRS involved the trailing car coming out of Eau Rouge close behind the leading car, tucking into the tow, then pulling out to pass. That's the way it should be done. The way I see it DRS simply compensates for the problems of aerodynamic instability making it hard for the trailing car to follow closely.

DRS and the safety car strategy sure helped put into place the win.

i think DRS was perfect for this race, if anything the cars seemed ready to pass even before the activation point. everyone was running a relitively high downforce setting here except petronas/mercedes seems like they anticipated the dry and took the risk. maybe that is why it seemed to be a great advantage. i think most of those passes would have happened regardless.

I'm sorry to say it, but Kamuy Kobayashi should have brake a bit and let hamilton to come back on the racing line. Hamilton would have overtake him easily later, it was just a matter of time. But the real fault is Hamilton's, he shouldn't climb over Kamuy cause he saw him in his mirrors that there is no intention to brake. About Michael Schummi, he would finish on 6'th position if Rosberg wouldn't let him pass away. If you noticed the convos between team and Rosberg, they told him "we want a clean race, we want a clean race". It was a subtle way to say "let him pass, there won't be a big difference at points"

Yea and the Virgin team would win every race if they never had to pit and their cars made more power.

Webber vs. Alonso in Eau Rouge was unbelievable, great race even though DRS overtaking was a too easy.

Speedhunters covering F1? I could get used to this.

@Lucian that is just exactly the sort of cynical thinking that made F1 boring before 2006, and you claim "we want a clean race" means team orders? Not really, if you actually watched the race (which you probably didn't) you would notice that Rosberg didn't make it easy at all, so take your rubbish opinions elsewhere

Hamilton had passed Kobayashi, and Kobayashi went up Hamilton's OUTside, then turned into Hamilton, causing the crash. Please don't spin it like it was Lewis at fault. All 3 announcers also agreed.

Nice to see some F1 coverage. Even though Speedhunters has been truthful to street and production cars, it would be nice to see more F1.

I really like Kamui Kobayashi because if he's in the right car he would be a good front running with his aggressive still. However I'm a much bigger fan of Lewis. Lewis was clearly well enough ahead of Kobayashi. Kobayashi didn't give Lewis room to continue on and he lurched into Hamilton. Either way it doesn't matter now. Red Bull's lead in both championships is so large that at this point that they've already won it all.

So now the Speedhunters are covering F1? is it only Spa or will it be the whole rest of the season? If so, this is good news!

Man,this F1 is soooo boaruing,Shees,do youguys have such a little life trhat you sit home all day watching cars drvivn by billionairs going ariund in a nice little crcle for 4 hours LOLOLOLOL Yiou guys are the cream of the crop of losers LOLOL