One of the most popular cars at the recent Nürburgring 24 Hours was the new Aston Martin V12 Zagato. And, believe it or not, all of their race cars which race at the Nürburgring are street registered, bringing a whole new meaning to the term ‘race on Sunday, sell on Monday’. Aston Martin granted Speedhunters full access to bring you this insight into the only two Zagatos in existence.

Aston Martin fielded two cars at the event, having previously completed a couple of VLN rounds the previous month.

One of the core aims for the programme is for the race cars to be research and development tools for the Aston Martin road cars. Nürburgring is where all Aston Martins are signed off in terms of dynamics and handling. Earlier this week, Aston Martin confirmed a limited production programme for the Zagato.

The latest collaboration between Aston Martin and Zagato began at the end of 2010 with design concepts incorporating elements from both brands. The project celebrates the 50th anniversary of the DB4 GT Zagato which spent most of its life as a race car.

The Aston DNA is instantly recognisable, but the Zagato DNA is also very evident. You’ll notice the cues, such as the subtle double bubble roof, the single round rear lights and the blacked-out A-pillar, which was previously seen on the 1980’s Aston Martin V8 Zagato.

The result is a car which is much more aggressive and its muscular hand crafter aluminium body is perfect for the base as a race car.

Using the influences and skill of nearly 100 years of heritage in their craft, every aluminium panel was formed using an English wheel and traditionally crafted body bucks. Each front wing alone comprises of seven separate pieces of aluminium, combined and then hand finished to create one flowing form. This is a dying art in the age of carbon fibre and composites.

The car was unveiled at the Villa D’Este Concours in Lake Como, Italy at the end of May where it won the Concorso d’Eleganza Design Award for Concept Cars and Prototypes amidst strong competition including James Glickenhaus’ Ferrari P4/5, BMW’s 328 Hommage and Audi’s Quattro concept.

Immediately after the event, the red Zagato was transported back to Aston Martin where the full race specification was added. Meanwhile, Zig, the green Zagato, was racing in its first event, using a VLN race as a shakedown before the Nürburgring 24hrs.

Aston Martin has a testing facility down the road from Nürburgring which gives them an added advantage. The team can drive their road registered race cars back to base after each session, ensuring the mechanics and team can work in their usual factory environment. They can also strip the cars in peace and without prying eyes.

Who needs service vans when you can transport all your gear in the race car?

Having their own facilities down the road was certainly a benefit. As you can see, with over 200 cars entered into the race, space in the pits was incredibly tight. At the track, the team has an awning in the paddock for setup work and preparation.

The pit garages housed between 4-6 cars.

As in 2010, the team shared their garage with the Gazoo Lexus team, their main competitors in the class. 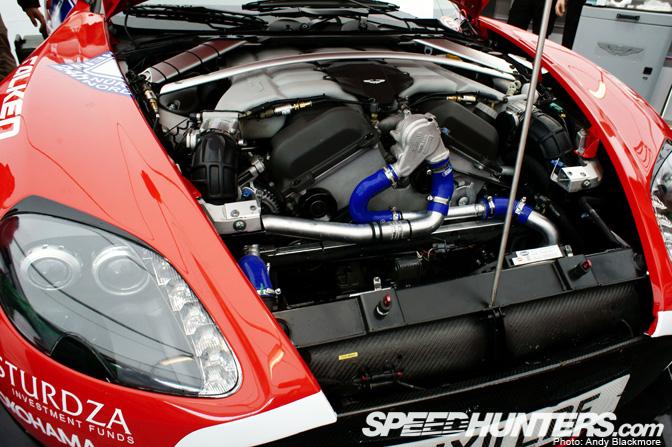 The Zagato shares much of its chassis with the V12 Vantage race car which was also racing at the Nurburgring. Power comes from the same 6-litre V12 engine producing 510 bhp. You can also find some Vantage heritage in the exterior such as the headlamp assemblies.

The Zagato features full race car aerodynamics and, according to driver Peter Cate, feels different to the Vantage. We’ll have a Driver Blog from Peter Cate soon here on Speedhunters.

Downforce is obviously critical, and the Zagatos use a deep front splitter and flat floor in conjunction with the deep rear diffuser and wing.

Interior comfort is vital in any race car, particularly one which will be driven in anger for 24 hours. Here one of the Aston Martin mechanics positions the ducting for the driver ahead of qualifying.

Additional air flow is directed into the cabin from the side windows. Lots of attention to detail.

You have to allow the air to escape, hence these air outlets in the rear window. The window has a semi-transparent vinyl to limit dazzling the driver from the headlights of the cars behind.

Not much of a rear view for the drivers with the roll cage and cameras filling up most of the rearview mirror.

Qualifying went well for the team, setting quick times during first session, allowing them to concentrate on race set up in the second qualifying session.

…With Zag a little behind, on a slightly more conservative strategy.

Chris Porritt would start the race in Zig, seen here on the grid.

Once the race was underway, the cars performed exceptionally well.

With reliability issues for class rivals Lexus, the two Astons moved into 1st and 2nd in class as night fell, ahead of the GT2 specification Farnbacher Ferrari which needed lengthy suspension repairs.

However during the night, both cars’ progress were severely hampered. Peter was T-boned going into Turn One by a slower car that missed its braking point after exiting the pits. Pete crawled around back to the pits, but damage to the car’s suspension, steering, engine mount and clutch sensor would keep Zig in the garage for a significant amount of time.

Meanwhile, the sister car suffered some gearbox gremlins and the team decided to change the gearbox, something they hadn’t been done before on the new car. The change went flawlessly and the car rejoined, now ahead of Zig.

Both cars worked their way back up the field during the morning and into the afternoon.

Both Zagatos finished, continuing Aston Martin’s 100% finishing recorded with Zag finishing 6th in class just in front of Zig. The team’s other entry, a V8 Vantage GT4 also finished. Quite an achievement for a road legal car which hadn’t raced until six weeks before one of the toughest races in the world!

Aston Martin have now confirmed a limited production run of the V12 Zagato. Just 150 will be produced.

As I mentioned, Zig driver Peter Cate will have a Driver Blog shortly, providing a rather unique insight into the weekend and what it’s like to challenge the Green Hell for 24 hours.

Special thanks to Aston Martin for allowing us such exclusive access.

a truly beautiful mix of form and function

Beautiful car...wish companies like Bugatti would take some design cues and come up with something like this. Instead of throwing Porcelain on their cars....

wow, what a post. great images as well. Love the car, not so keen on the graphics, but I would happily drive one. Looks stunning.

One of the best posts

This is why I love Speedhunters

I love this car, the street one will do please

Wow! Im amazed! Great coverage. At first, i wasnt interested. But then im more than interested about these cars.

No offence though, you keep mentioning "road legal" ok they may be road-legal (in some countries) but that ain't no Golf! Not very effective to get your groceries! That's straight up a fully fledged race car that happens to have the minimum requirements to barely be "road legal" so... we're talking about different classes here.

Anyways, to finish the 24hrs of the Green Hell is awesome, to finish it on those positions is great!

ugh such as sick looking car! the rear looks insane!

nice post....any chance of some desktops?!

I normally really enjoy Aston Martin design, but these cars don't do anything for me. They lack to the strong body lines of other recent Astons and just looks like a compromise, particularly the rear end. I could see something funky like this coming from, say, Alfa Romeo, but on an Aston w/ a V12 no less, it's a bit bizarre. Even the trademark grille opening looks too soft for me.

Reminds me a GTR

Looks like a cross between a Aston and a R35. Looks Badass!

That was some of the best photo sets I've ever seen on this site! Made me feel like I was @ the paddock wearing one of the crew jackets helping the team get to the finish! Awesome job Andy!

Road legal means it meets the regulations to be registered on the road, in this case in the UK and thus the same rules as a Golf. You try doing that to the Lexus LF-A or Ferrari F458 GT2 in that class?

Didn't they race a Rapide last year as well

I need to say one thing. The Aston Martin Zagato is one of the most if not the most beautiful car in the world.

There are only two Aston Martin V12 Zagato race cars on the planet, and I’m the lucky guy who has