Looking back at these images, I can’t believe that for all the years I’d been to Le Mans previously I’d never made it to the drivers’ parade – which looking back is a shocking admission. The Friday evening in the centre of Le Mans town is one of the – many, admittedly – highlights of the Le Mans weekend: the time when the fans get up close and personal with the 168 drivers of the 56 cars taking part in the 24 Hours race. It’s a street party crossed with a rock concert and a spectacular assault on the senses for all involved – teams, media and public.

Glamorous cars were complemented by other glamorous distractions. The parade is supposed to last two hours, from 6pm to 8pm. In reality, it’s a sprawling affair, a mass of cars, people and a typically Gallic approach to organisation: if something’s good then don’t rush it. Whistling officials are thankfully banished (they have enough fun in the pit-lane at the track). Whistling crowds are encouraged. And cheering, clapping, shouting… Who wouldn’t be over-excited at the parade of supercars that precedes the drivers? The atmosphere is like the Goodwood Festival Of Speed on steroids.

It’s only after the supercars have finally made their way through that the drivers even make it to the start ramp – and then they still had a couple of hours ahead of them to make it through the fanatical crowds and round the city lap to the finish.

Rewinding a couple of hours, and the car parks in front of the immense buttresses of the 12th-century Cathédrale St-Julien du Mans were already overflowing with supercars being lined up for the parade and worried-looking officials trying to make sense of what was where amongst the throng of people. After missing the Aston Martin One-77 at Silverstone the previous weekend, I was very pleased to catch sight of one here – the sound of the 7.3-litre V12 was warning enough that something special was approaching.

The theory was that you needed a pass to be in this area (several drivers had to borrow them to get to the corral where the drivers’ mounts were being prepared!), yet there seemed to be hundreds of people milling around. Being in a driver’s suit seemed to be a hinderance! Having a nice car seemed to be a much better way of gaining entrance.

Eventually, just passed 6pm the first car to drive out of the corral and into the assembly area appeared – the 1991 Le Mans 24-winning Mazda 787B, its howling engine struggling at such low speeds to crawl past the marshals trying to clear a way. The 787B is so luminous in real life: the colours are impossible to reproduce in print, and hard enough even in RGB. The Mazda is staggeringly bright.

Unsurprisingly the recently-restored car didn’t try and ascend the start ramp: it took the route to one side and was pushed into a prime parking spot the other side.

Next to it a couple of road-going Mazdas were lined up – including this immaculate RX-7.

Once the 787B was safely in place, the first supecars begun to make their way onto the start ramp in front of specially constructed grandstands for the invited guests.

The ramp might have seemed like a good idea, but the reality was that a lot of drivers were wincing as they tried to get off the ramp and back onto the road: this Veyron left some carbon scrapings as evidence of its descent…

After this the floodgates opened and supercars followed hot on the heels of the last. It was difficult to keep up with what was coming through! Ginetta brought along its F400.

Each car was proceeded by a Harley Davidson from the local HOG chapter, complete with introductory panel for the following car.

I’m hoping this makes it to international GT racing: the 599 XX is the perfect size for a GT1…

New takes on old themes were welcome: the fleet of real GT40s back in the parking area were complemented with this new-generation Ford GT in a classic-themed livery.

…especially compared to something like the Gumpert Apollo. Drivers generally carefully made their way through the starting area to the start of the run through the crowds: there they would gingerly light up the tyres as much as they dared before making their way up the narrow corridor of people.

Another car I hadn’t seen before the Savage Rivale Roadyacht GTS (I kid you not) from Holland. The proposed GT racing version of this looks stunning – I can’t wait to see it on track, though there doesn’t appear to have been a clear announcement as to where it might race.

The Koenigsegg Agera was another to edge nervously down the ramp…

The prettiest car was the Alfa Romeo 8C – my usual bias helped by the success ballast that was perched on the window sills.

The final batch of cars through were all electric-powered – they’d also be taking part in a parade lap before the race itself on Saturday. This one was interesting: the GRA Electric Raceabout, a project from the University Of Applied Science in Helsinki.

Peugeot’s EX1 is one of the fastest electric cars in the world: it can do 0-60mph is 3.5s and can top 160mph in less than 7 seconds! It’s those kind of figures that have me battling with my conscience over the lack of noise from the rear… Next up, some images from the drivers’ parade itself. 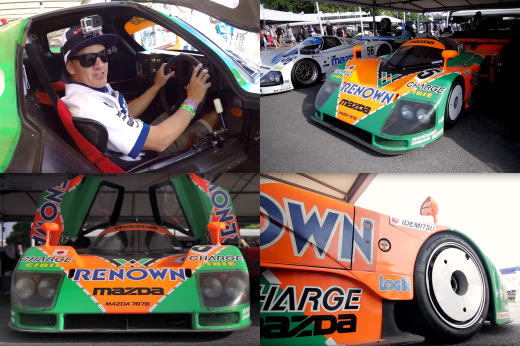 What an incredible experience!

Ticker tape, the streets lined with people cheering and shouting, drivers running down the sides of the

wonderful to see an un-molested RX-7, this was just like the very first scale model i ever built. love those Ford GT40s, such a classic shape. - Glamorous cars, 'ticker tape' AND glamorous young ladies.. what more could anyone want!

Jonathan, did that Savage look good in person? One of the first pictures I've seen of it out in the streets! So droolin' and dreamin' right now...