When you picture a rally car, what model comes to your head? An Evo? An Impreza? A Citroen? If you are looking back to the gold old days maybe a Ford Escort or a Mini Cooper?

How about a V8-powered Ford Falcon?

Ford was very active in motorsport in the 1960s whether it was the Mustang, the GT40 at LeMans or the Galaxie in NASCAR. For the Falcon though, Ford saw fit to modify the car for European rally racing, which was uncharted territory for an American car.

It turns out that the little Falcon would make quite a name for itself at the famous Rally Monte Carlo. One of the drivers that Ford selected to pilot the Falcons was Bosse Ljungfeld, a Swedish driver known for his rallying skill. Although he would later be pushed back in the standings due to penalties, Ljungeld won all six of the timed stages at this event.

The cars themselves were prepped by the wizards at Holman and Moody in the US. Under the hoods were hopped up small block V8's that made close to 300 horsepower. Quite a lot for a rally car in those days!

The suspension and brakes were also upgraded to handle the abuse of rally racing. Of course no rally car would be complete without some quality driving lights.

Besides the Monte Carlo event, the Falcons also saw action in other rally events around Europe. 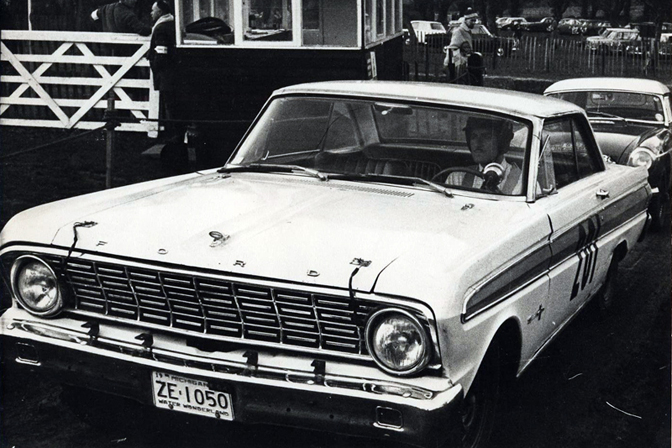 There's Mr. Graham Hill behind the wheel of his Falcon during the RAC Rally in 1964.

It must have been quite a challenge navigating one of these cars through the extremely tight corners. Especially considering the tire technology of the day.

Ford versus Volvo. What a fantastic shot.

Looking at these old photographs, I can't help but think how cool it'd be to buy an old Falcon and build it into a replica of one of these rally machines.

You can still pick up Falcons cheap (here in the US at least) and with a little work you could have a very unique project car on your hands.

Now if you excuse me it's time to go hit up Craigslist!

not your typical rally car by any means...

Wow, on dry tarmac those Falcon's would have had massive understeer problems!

It's 'rallying', not 'rally racing' thanks

Back when safety was overrated

Aussie versions of these also did rather well in the original London-to-Sydney Marathon.

thats so cool to see that chuck of racing history

race cars were so much cooler back in the day

That's definitely not something you see in today's rally driving.

Understeer underschmeer. An old Japanese guy said to me "everything Japan learned about cars, it learned from America. Back in the day, Toyodas and Princes would catch fire- they'd fall apart on rough roads. Every day, Japanese engineers would look at the American cars with great interest. They were the world's best".

You take a modern RX8 or GT-R, and drive it on cobblestone and broken roads- it will literally fall apart. Those old falcons- they were tanks. The only current Japanese car built like that is a Subaru.

orry but the first thing that comeis into my mind when you say Rally is LANCIA!!!!!!!!!

maybe the young guys that follow the web nowadays should take a look at some racing Hystory...

I fell in love with these after watching La Carrera. There are some really cool Falcons in that race. I liked them before when i had a Mustang coupe and i was about straight line but now im about road racing and love to see them going around turns to! Theres something special about American Muscle cars used in rally and road racing.

Can you just imagine the body roll trying to do a Scandanavian flick! looooooooooooool

"When you picture a rally car, what model comes to your head?"

"You can still pick up Falcons cheap (here in the US at least)..."

The only american car that can be bought cheap here, is the Neon.

Yes, I have a '64 Falcon Futura sitting In my garage as I type. Was going to stuff It with a BB 468 Chevy (sitting on the ground next to It) for a fun little drag car. But I just changed my mind.. Thank you Speedhunters.

Those old Falcons shared their platform with classic Mustangs too. So there is a huge aftermarket for them.

What a ridiculous vehicle, must have been comical to watch it in the corners!

And '@Syphon', you are so full of shit your eyes are brown.

Never expected to see a retrospective on such obscure part of Ford's racing pedigree here on Speedhunters. You should also look into Mercury's Comet rallying program.