To say that the return of the GT-R to Japan's premier motorsport category was a major event would be a huge understatement. Despite earning massive success with its Fairlady Z in the years 2004 – 2007 (two titles plus two second places in the Teams' championship, plus one Driver's title), the anticipation surrounding the arrival of Nissan's latest weapon, the R35 GT-R was palpable.

Before the season even got underway, the buzz about the car was like nothing before it. At the pre-season test at Suzuka there were hundreds of ardent fans camped out overnight at the circuit gates – and this was just a test!

As expected the new challenger was in command right out of the box, which of course only added to the whole momentum about the latest car to wear the GT-R badge.

Just to rub salt into the wounds of rival manufacturers' efforts, at the opening round of the season (also at Suzuka) three examples of the new car took the top three spots on the grid in qualifying. This wasn't to be a mere show of force, it looked like utter domination.

In the opening race, everything went according to plan, the pair of factory entries duly recording a 1-2 finish. But it wasn't just about the positions at the end; the pair of NISMO cars had literally thrashed the competition, with the 3rd-placed finisher (TEAM TOM'S Lexus) coming home a gigantic 25 seconds in arrears.

Round 2 took place at Okayama, a vastly different circuit to Suzuka. Still however, the dominance of the Nissans was absolute. In qualifying, the Motoyama/Treluyer pairing took pole, despite 55kgs of success ballast onboard after winning the season-opener.

In fact, GT-Rs took three of the top four spots on the grid for the 82-lap event. While the Nissan fans cheered, mutterings of dissension could faintly be heard.

The race produced another 1-2 for Nissan, with the #23 machine taking victory while the #12 CALSONIC car of Tsugio Matsuda and Sebastien Philippe was 2nd. Behind this pair (separated by only 2 seconds) the third-placed machine was some 30 seconds away. The grumblings of other camps were starting to grow louder….

By the time the GT circus descended on Fuji Speedway for the traditional Golden Week race at the beginning of May, a 'Special Performance Adjustment' had been levied on the GT-R – in effect slowing the cars by over two seconds a lap. Not only was a massive amount of success ballast added, the cars' air restrictors were also pinched rather dramatically.

The penalty had the desired effect, as for Round 3 the top-qualifying GT-R was in a lowly 10th place, with the other four examples occupying 12th, 13th, 14th and 15th spots.

In the race, the 10th-place qualifier managed to move up one spot to ninth, while the other GT-Rs came home 11th, 12th, 14th and 15th – the hitherto dominant #23 machine placing 14th and three laps away from the winners. Had the Special Performance Adjustment been just a little too harsh? Some would certainly say so.

Next up was the Sepang round and the tropical heat of Malaysia – a round that always proves to be a festive weekend.

In qualifying, Michael Krumm was sublime, netting pole position ahead of a pair of NSX entries.

Meanwhile, the previous year's winners KONDO RACING lined their GT-R up fourth on the grid in the hands of J.P. de Oliveira.

…while the #23 NISMO entry, with 95kgs' success ballast now onboard, lined up last on the GT500 grid, nearly four seconds off pole time.

In the race, the KONDO car took over the lead position and led home another GT-R 1-2, this one with the #22 car in 2nd place. It was a zenith for the KONDO RACING team, as this victory wasn't just their second in the category, it was also a back-to-back Sepang win for the young team.

How did they do it? No (regular) success ballast from the previous rounds, plus rock-hard Yokohama rubber which suited the muggy conditions perfectly.

When the series came back to Japan for Sportsland SUGO in late July, NSXs dominated the top end of the grid, the nearest GT-R sitting in eighth. The #23 machine did manage to qualify in the top ten, in tenth (its Special Performance Adjustment weight reduced to 75kgs after not scoring at the previous round). 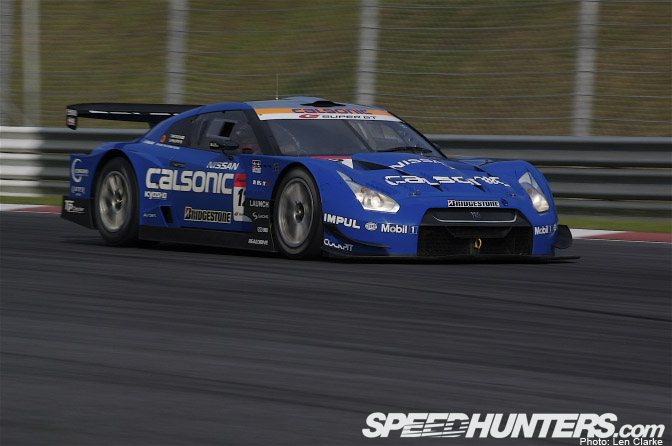 For this round, regular driver Tsugio Matsuda was taken ill so former JGTC/SUPER GT driver Dominik Schwager was brought in.

In the race, both factory entries ended up well outside the points and 2 laps in arrears of the winners, the effects of their earlier success now seeming to have put paid to any meaningful challenge for title glory. In fact, four of the five GT-Rs were classified outside the points.

The longest race of the season – and one of the high points in the calendar was next, the Pokka 1,000km at Suzuka. In qualifying, Michael Krumm put in another scintillating performance in the #22 to take 2nd on the grid for the six-hour event. Dominik Schwager came onboard as third driver, no doubt his GT-R  experience in the CALSONIC car at the previous round standing him in good stead.

Eighth on the grid (now with only 55kgs extra ballast) was Benoit Treluyer in the #23 XANAVI NISMO GT-R. Brazilian Fabio Carbone was drafted in for third driver duties in the typically six-stint event.

The race was greuling, with not just the greater-than-usual distance, but also scorching midsummer's heat taking its toll on both the teams and drivers.

After six hours' running, the #12 CALSONIC IMPUL GT-R romped home to a hugely popular victory. And for the first time that season, all five GT-R entries finished in the points.

Here's the #24 KONDO RACING entry on its way to seventh.

September saw the series' annual visit to Twin Ring Motegi, and with no weight on the car, the #3 Yellow Hat GT-R was expected to shine. That is exactly what happened, the bright yellow machine taking a commanding pole position with Ronnie Quintarelli at the wheel.

Expectations for the race were even higher as the outright pace of the lightest of the GT-Rs meant that only a mistake could prevent it from taking the win. Much was hoped for as it would have been Hasemi Motorsport's first victory since moving up to GT500 after taking the title in GT300 in 2003.

Quintarelli and teammate Naoki Yokomizo delivered, bringing their mount home in first place after leading for the whole afternoon – though they were made to earn it as the gap was just over a second to the hard-charging ARTA NSX in second.

Round 8 was the seasonal visit to the south of Japan and Kumamoto prefecture's Autopolis (I'll be doing a separate post on this fabulous circuit soon) where, now holding only 20 extra kilos SPA weight, the #23 factory GT-R snatched pole position. This was one of two turning points of the season, both occurring that weekend. Winners last time out, the Yellow Hat GT-R had 60kgs onboard, yet still managed to take fifth on the grid for the race.

The race was a wild one, Krumm and Yanagida in the #22 car going from 16th in qualifying to finish fifth in the race, just ahead of the Hasemi car in sixth.

Here's a little sidetrack, Autopolis is the only track in the series that runs counterclockwise. Compare it and this image above (from Fuji) of the sister car being refueled (plus rather different rear aero package reflecting contrasting circuit characteristics).

However, the real story of the meet was the lights-to-flag victory for the lead factory machine of Satoshi Motoyama and Benoit Treluyer. Not only was it an intensely popular come-from-behind victory (in terms of the battle they'd been having since dominating the early races of the season), the win put them back in lead of the title hunt with just one more event to go.

The tables had been turned. Here then-NISMO chief Iijima-san looks visibly relieved that his boys have brought home the silverware at such a critical time in the season.

And the podium ceremony showed just how much that crucial victory meant.

The final round of the 2008 season took place at Fuji Speedway, and it was another season-ender with everything left to play for in terms of the title chase.

The top qualifying GT-R was the Round 4-winning KONDO RACING machine in 2nd place.

While the #23 car, with 80kgs onboard, took 9th on the grid. The pressure on the team had been lifted; all they had to do was bring the car home in the points (depending on how the others finished).

In the race, the CALSONIC GT-R took the spoils and its second win of the season.

…while the next best finisher among the Nissans was the #23 car in ninth place, just enough to take the Driver's title (by two points) at the season's final hurdle.

It was an amazing year of ups and downs for what was clearly the best car on the grid. Despite the difficulties they faced, the NISMO squad beat the odds, showing the marks of true champions. As well as earning the Driver's title, in the Teams' standings NISMO placed third.

2008 was an incredible year for the GT-R, and one of the most enjoyable in recent memory for this snapper. There's a whole lot more to the story, but it would take a long time to tell. Hope you enjoyed this much of it.

I remember the joy and the warmth taking over me while watching the mightiness of the GTR in the season opener round.

That was History with a big H.

what an awsome racing series! i would rather watch this that the BTCC/WTCC!!!! speaking of which its a shame that we dont get coverage of these races on the TV over here in the UK

Zuffenhausen already said what I was about to speak of..

Fantastic post Len! Thankyou so much for a great narrative on the season for the new car and those wonderful pictures too. Keep up the good work.

Len will you be covering Super GT 2011 for Speedhunters this year? I hope so.

now this is a top quality post - Len you have surpassed yourself with this one - pictures a 10/10! the Calsonic GT-R did well i seem to recollect..

Why the difference in the headlights? Some have blue one them and others do not? Anybody know if there is a reason to it?

now this is a top quality post - Len you have surpassed yourself with this one - pictures a 10/10! the Calsonic GT-R did well i seem to recollect..

Hi EJ257, the reason for the clear vs. blue lenses is another way for team personnel to instantly tell which car they're looking at. The #22 MOTUL AUTECH machine has the blue lenses while the #23 XANAVI NISMO car's headlights are clear.

I was wondering if you have any technical shots of the chassis, engines and suspension systems of these cars.

Is a factory visit on the cards?

Hi sanyonlove, as much as I'd absolutely love to do a post on the technical aspects of the GT-R, the manufacturer is strictly against releasing such information - all Japanese makers are, even after the fact. I guess it's not about what people like you or I would see, but the engineering gurus from rivals and adversaries....a wicked post suggestion though!

A factory visit? Something that's actually in the pipeline. Stay tuned.

Great piece of history! Now if Nissan could remove the "Success Ballast" from the stock GTR...

I remember on one of the Gekkisou GT shows in Japan saying the GT-R had an advantage due to changes in regulations.

The GT organization is known to give leeway such as the SC430 for early adopting the new regulation V8s.

Too bad... pesky engineers with their industrial espionage!!

Looking forward to the factory visit, keep up the good work.