Earlier in the month, Rod, Melinda (our trusty Production Coordinator) and I headed out to Abbotsford for the World of Wheels car show. And in spite of battling traffic the entire way there, it was certainly well worth the trip.

Our Melinda is a huge petrol head, and she can often be found spending her weekends beneath her pride and joy, this '63 Falcon. Melinda will be introducing herself on Speedhunters shortly, so I'm sure you'll be seeing more of her Falcon's build.

…And as you can tell, Melinda has a great sense of humour. This was what was lurking under the hood of her work-in-progress Falcon.

It was hard to miss this 1963 Buick Riviera when you first walked into the halls.

The three of us would've spent a good half an hour examining it from every angle.

It had an incredible amount of detail.

Another car we spent some time drooling over was this '51 chopped Mercury.

What a stunning 'sled.

Nicknamed 'Casper the Truck' this is a 1968 C10 on a 75 Chevelle chassis built by MacDonald Racing.

…Only to discover it's powered by a Cadillac V8.

Melinda's pick of the show was the '51 Ford with a blown flathead.

Immaculate 1970 AMC Rebel. It was known as 'the Machine' back then and came with red, white and blue reflective stripes.

Here's great piece of BC racing history. Built by Jack Williams, it was one of the most well known drag cars in Western Canada during the 60s and won 'Best Appearing' at the 1962 Winternationals over in Pomona CA. It also held the A/D national record in 1963.

The hand-formed dragster is powered by a 404 Hemi and is still fired up occasionally. Jack's daughter, Wendy, is also a drag racer.

I spotted this inconspicuous sticker inside its nose.

Nestled in the corner of the hall was a rather lonely Japanese car, a Datsun 510.

When's the last time you saw Alfred E. Neuman? I think I was probably ten!

VooDoo Larry brought out his 1931 Ford Model A coupe, which was freshly painted for the event.

Apparently the 'VooDoo Larry' nickname came about when he signed a customer's bike, with the owner suggesting he combine his name with VooDoo Kings, the name of his car club.

Sitting alongside VooDoo Larry's hot rod was Jimmy Shine's famous masterpiece. It's a 1935 Ford frame with a pickup cab body.

We popped into World of Wheels on their setup day, which explains the lack of crowds. Stay tuned for more posts from our Abbotsford trip, which will be coming your way shortly! 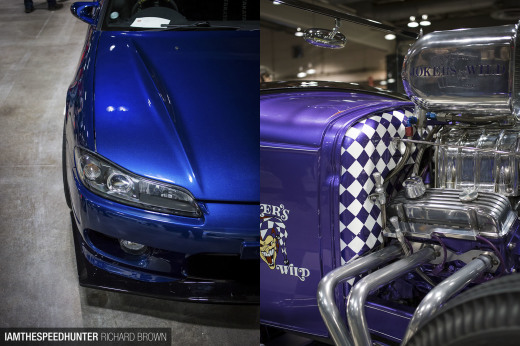 More info and pictures on the V8 VW please!

Nice coverage, Melinda has got some great tastes!!!

the color of that buick Riviera is a shocker, I cant stop staring....

voodoo larry's shop is less than a mile away from my house. i should really stop in there some time.

Anyone else notice the misspelling of "VoodooLarry?"

that Henry J gasser is killer!

i zhought Jimmy Shines car got painted black a couple of years back... still a great piece of machinery tho

the Buick Riviera is a stand out classic, '51 chopped Mercury sled is cool "daddy-o", just needs flames blasting out those pipes, Caddy V8 power in a VW and a Bus at that wicked!! out of place but nice nonetheless = the Datsun 510. - what a fantastic blog.. - nice one.

i for one have been missing the old school US rod & custom coverage here on Speeedh - WHAT THE F - that 510 is NAAAAASTY!!!

some of these need to be desktops, VooDoo Larry's 31 model A

Wasn't sure if you guys made it... Was hoping to run into you out there

Gorgeous stuff. Jimmy Shine's truck is superb every time I see it