The guys at Power Fab automotive had a little corner booth going on at Import Reactor this past weekend. They were showcasing a few of their cars, and this G35 is one of them. I consider it the ugly duckling of the show because of its lack of the front body panels. I mentioned in the last Import Reactor post that the Top Secret wide body's front pieces were delayed in their arrival to the states because of all the terrible things that were going on in Japan.

No matter. Body panels or no body panels, this car is amazing. If there was a "most badass" award at the Import Reactor, this G35 would've walked away with it. Hands down.

Why? The 700whp and 565wtq fully built 3.6L (non-stroked) VQ35 should be reason enough. All the internals have been upgraded as well as the addition of a Greddy turbo kit. The kit originally came with a TD05 18G turbo but the Powerfab guys upgraded it to a GT28R. Powerfab also fabricated their own downpipe, exhaust and intercooler piping.

This is a car that's focus is 100% on hauling as much rear end as quickly as possible. And with that in mind, you can understand just why the AC was removed.

The beautiful crafted intake manifold was build by CJ Motorsports.

The power steering was moved to the other side of the engine bay so the car can run 3" intercooler piping.

The Powerfab guys wanted to remove the mustache on the intercooler for Import Reactor but couldn't find any brake cleaner to do so. I'm glad they didn't as the mustache is amazing.

Those are some sweet welds on the custom intercooler mount.

…but where there aren't hardlines, these beautiful puppies are employed.

…and 20×12 +0 in the rear wrapped with Nitto INVOs all around. Stopping this beast as been brought to you by the guys from Project Mu.

On the suspension side of things, the car is using a set of HKS Hypermax coilovers, SPL swaybars, SPL endlinks, SPL A arms and SPL traction arms.

The guys from Powerfab say that, with the front end, the car is capable of breaking 200mph at the standing mile. Sadly, it will not be be ready for the Texas Mile this upcoming weekend.

I will be visiting the guys from Powerfab this week to snap a photo of the car with the fully mounted on Top Secret wide body kit. 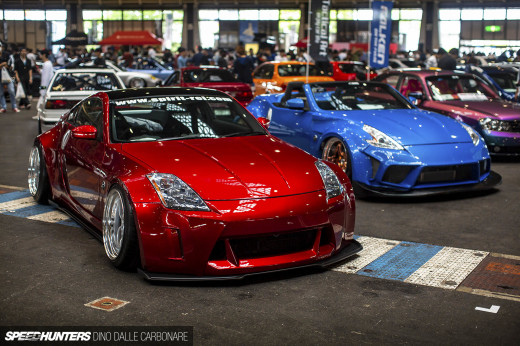 The Zs Of Wekfest 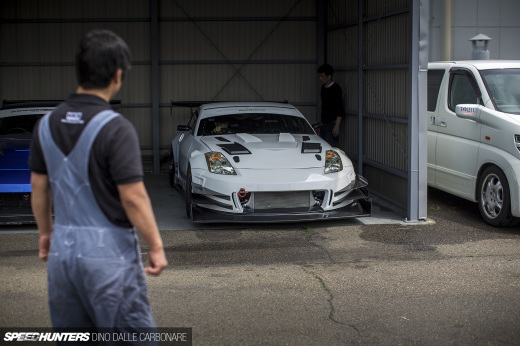 Performance Bargain: Why You Should Buy A Z33 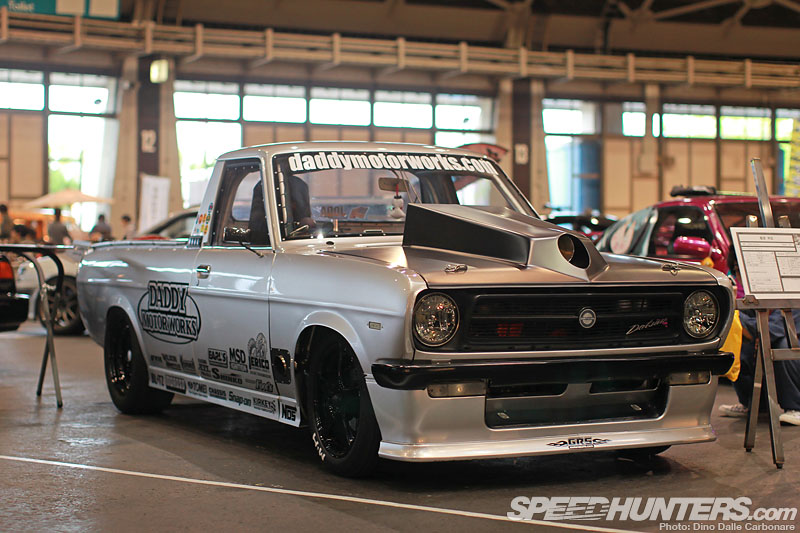 Mixing It Up: Spotlighting At The Necs 2013

so...it wont be at the texas mile

intercooler + no body it looks like a sci-fi rolls royce!

what's so good about the welds on the intercooler? don't look particularly good to me.

plus who puts on a "greddy" turbo kit, then changes the turbo and basically all the piping?

and who the hell uses project mu in the US?

so sad when shops have no vision. just use the same old tired brands and make hardly anything custom

I'm pretty sure a couple of GT28's can't make anywhere near that power at the wheels.

SPL doesn't make swaybars for this car, and this guys rear end wouldn't allow him to break the 200 mph mark...

This G35 is the bizzness. Can't wait to hear it fire up and run at full throttle.

It's going to need better tires for that kind of power / speed.

This is also obviously a twin setup not a single gt28r as the typo's suggest.

hmm it should be there man - by hook or by crook!! it looks done to me..

Fvcking sick ! I don't like the wheel choice, but who the hell cares?

All the fab-work is rad, great work and other than the wheels, awesome part's choice.

Thanks for sharing it.

bahahahaha that is fucking sick!!!!!!!!!!! Oh and you gotta love the Mustache

well, at least if it was possible, the panels arent just for the looks...

This thing is a beast! Great no-holds-barred build. Beautiful fabrication and cooling setup, which is a pretty uncommon compliment!

Some changes will be made before it makes it out to the mile hence why it isnt going this year. Yes the car is making 700whp/565tq to the wheels. For the most part this is still a street car so most of the parts used have been picked because they are available to anyone.

I like how the air intake is behind the oil heat exchanger... good stuff.

@PowerFab : Sorry for my ignorance but how can a couple of GT28R's make 700whp? They are only rated at 350 each max at the fly?

you guys all questioning the amount of power the turbos are making arent taking into consideration that the engine itself with fully upgraded internals is probably pushing 4-500 horse. Then with a twin turbo set up?! yeah... 700 is easily obtainable. its not like they're throwing the turbos on a stock engine here.

I don't think you understand how turbo's work B1,

if they worked like you suggest then everyone would fit the smallest of turbo's and never have any lag, all turbo's have a max power rating regardless of engine size,

I'm not hating I would just like to know which GT28's they are using as 700whp with only a 15% drivetrain loss is almost 850hp at the fly and no way on earth can a GT28 that I know of push that much air.

Why kill the car with such crappy tires?! The Invos are garbage!

The turbo's are misquoted in the original posting. The system was originally based off a Greddy Twin system as the article states, however as you can see from the extensive custom work, there is little left of the original Greddy system with the exception of the manifolds at this point. Maybe a stray coupler here or there still says Greddy too.

@Powerfab - Cheers for the info, much appreciated

@Powerfab can you tell me what sway bars are used? because I know SPL doesnt make sways only endlinks, thanks

Hotchkis sways are on the car. I was listing parts off so fast a couple things got mixed up.

power fab, good job allaround on this biuld i love it.

definently keep the mustache, only a real boss can pull off a mustache like that! lol

cant wait to see it all said an done.