Our race car launch coverage continues with a catch-up on the new 2011 Formula One cars which have been unveiled recently. The first F1 test of the season has just finished in Valencia and with many teams running their new 2011 cars for the first time.

The most significant changes for 2011 are the new Pirelli tyres, replacing Bridgestone, the re-introduction of the KERS energy device and a new driver adjustable rear wing (above), which is supposed to improve overtaking.

The driver can move the wing to a low downforce (bottom image) setup when on a straight.

World Champions, Red Bull Racing launched their new ‘RB7’ at the start of the first test. Adrian Newey’s car is a development of the championship winning RB6 and the team has retained Sebastian Vettel and Mark Webber. Recent tradition has seen the reigning champion winners struggle the following season due to all the efforts the previous year.

It will be interesting to see if Red Bull can continue where they left off, or if they will go the same way as BrawnGP/Mercedes in 2010 who struggled all year.

The car features the fashionable high nose, but it’s the packaging around the rear tyres which is of interest, the sidepod and engine cover just blend into the floor, forward of the rear suspension. Pretty impressive.

Ferrari were the first team to launch their car, back in January. The car looks conservative but seasoned fans will be well aware the launch cars often do not have the latest wings and aerodynamics on board.

Named the F150 after the 150th Anniversary of Italy's Unification (…and not the Ford truck!)  the car, drivers and team remain largely the same as 2010. Amongst the other machines it looks a little generic. 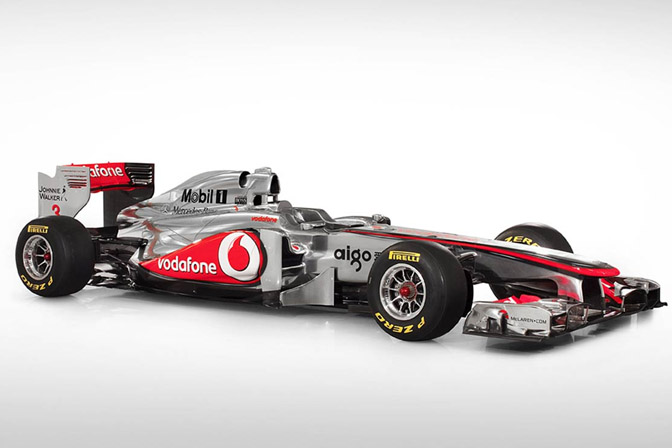 McLaren made an exception and this time launched their 2011 machine in Berlin, Germany earlier today.

The team assembled the car in front of the public, but a dummy plastic engine and exhaust hid the all important features.

The team have already confirmed the car will look different in places at its first test next week. Rumour is a clever exhaust system, maybe like Renault, which we will discuss later.

A few unusual features on this car. The air-intakes above the driver are split into three. The main one is for the engine, the small one, recessed underneath is for KERS and the new secondary air intake on the engine cover is for the gearbox.

The sidepods are also quite unique. Very tall on the outer edges, but then much lower by the cockpit. McLaren explain, this is to help clean the air to the lower rear wing element. Also note the undercut at the bottom of the large Vodafone roundel on the sidepod.

Mercedes GP’s new car retains the Silver and Black look with additional turquoise flashes of colour from title sponsor Petronas. The car looks quite conventional, now the team has reverted to a traditional roll hoop and engine air intake.

The wide nose with angles front wing supports are distinctive. Michael Schumacher and Nico Rosberg are retained for 2011. It will be interesting to see how Michael does in 2011. Quite frankly, he was a disappointment last year.

Onto Lotus, now this will get confusing, so take notes! There may be four Lotus’ on the grid in 2011, but this is dependent on a court case due in March, just before the season starts.

In 2009, Tony Fernandez obtained a licence from Group Lotus (Lotus, the road car manufacturer) to run a new team under the Lotus Racing banner for 2010. During 2010, Tony then negotiated a deal to use the historic ‘Team Lotus’ name on the team cars from 2011. David Hunt, brother of F1 World Champion James, had acquired the brand years ago after the original Team Lotus had gone bankrupt. Colin Chapman originally owned Team Lotus as well as Lotus Cars/Group Lotus, but both were separate companies.

Team Lotus was the company and brand which Lotus ran under in Formula One from the 60s through to the 90s. Fittipaldi, Andretti, Senna, Peterson, Mansell were the stars, back in the glory days.

One suspects they keep quiet about the likes of Philippe Adams…..

‘Team Lotus’ launched their T128 earlier this week. I never tire of the Lotus Green and Yellow livery and its great the team have brought a modern twist to it. The team have decided on omitting KERS for reliability and packaging reasons.  The  T128 is now Renault powered and using the Red Bull gearbox, which helped the Energy Drinks giant to the World Championship in 2010. 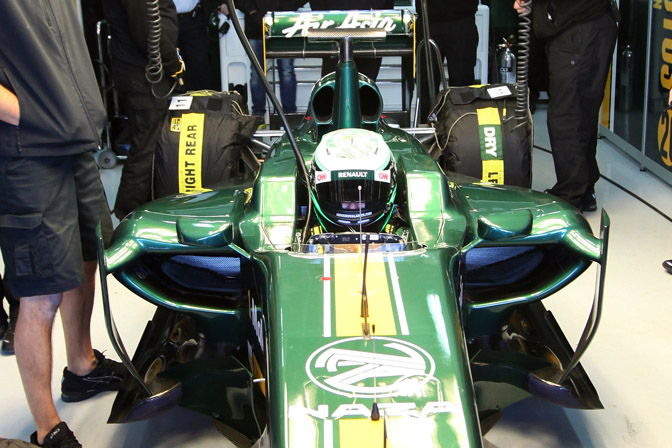 One cool feature is the blade style air intake above the drivers head. Pioneered by Mercedes GP in 2010, rules had been changed to outlaw this design, but it seems Lotus has found a way to get around the rules. This image shows the extreme shape of the sidepods with an undercut to help direct airflow around to the side of the car.

Jarno Trulli and Heikki Kovalainen (pictured above) remain as drivers.

Onto the other Lotus team!

While Fernandez was setting up Lotus Racing, Proton, owner of Group Lotus (the road car company), decided to bring in fresh management and decided they also wanted to be in Formula One. They believe they have the rights to Lotus usage in Formula One and are taking Tony Fernandez to court.

The Chapman Family, who run ‘Classic Team Lotus’ originally supported Fernandez but have now changed their allegiance to Group Lotus.

For now, Group Lotus partner with the old ‘Renault’ team as a sponsor and are called Lotus Renault GP. As a sponsor, the FIA OSD screens will display ‘Renault’ as the car during races, which might limit any confusion.

Regular Speedhunters will have seen this Black and Gold livery from Autosport via Paddy last month, but these images show the new 2011 Renault R31 which was launched in Valencia earlier this week.

Interestingly the team has chosen to use gold. In the past, gold has been a hard colour to work with high contrast on highlights and shadows. Back in the day, Lotus changed from gold to a beige with their JPS Livery in the 80s and Jordan had similar issues with their initial gold Benson and Hedges livery before changing to a more dramatic yellow.  I do like both Lotus liveries though.

You can't see it from these press images, but the paddock have already discovered the exhausts exit in front of the side pod, behind the vertical canards you can see above. Rumour has it, McLaren may also have something similar. Very clever. This hot air, in theory will help airflow around the side pod and also help pull air from under the front nose.

Robert Kubica and Vitaly Petrov remain drivers while Bruno Senna has been announced as one of the team’s huge test and reserve driving programme….odd given there is virtually no testing. 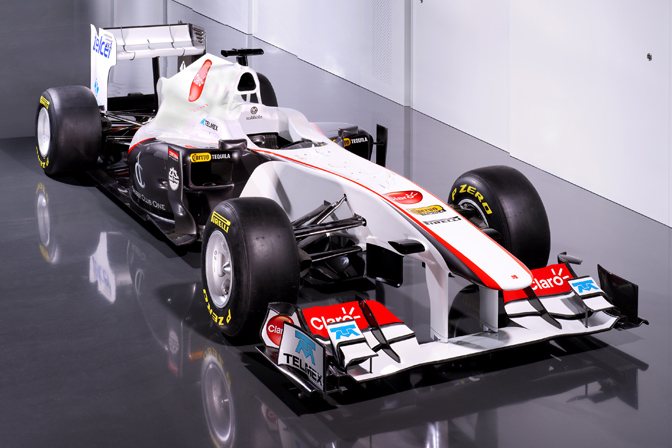 The new Sauber, quite frankly, looks a bit of a mess!  Sauber struggled in 2010 after BMW pulled out of Formula One. Peter Saber bought back his team, but with little sponsorship, they were towards the back of the midfield pack. The addition of Mexican driver, Sergio Perez has also brough much needed sponsorship from Mexico.

Let's hope they design a new livery before the start of the season. Kamui Kobayashi remains, making the driver line up one of the most in-experienced on the grid.

Scuderia Torro Rosso are now in their sixth year of competition after Red Bull rebranded the Italian Minardi team. ‘STR’ now have to design their own car, rather than have duplicates of Red Bull Racing's machines. This has made their challenge harder and you have to wonder why Red Bull continue with this setup.

Under the livery, one interesting feature is the bottom edge of the sidepod which curves back into the chassis, creating a air channel between floor and pod. Oldies like me will remember a similar concept on the Ferrari F92 many moons ago. 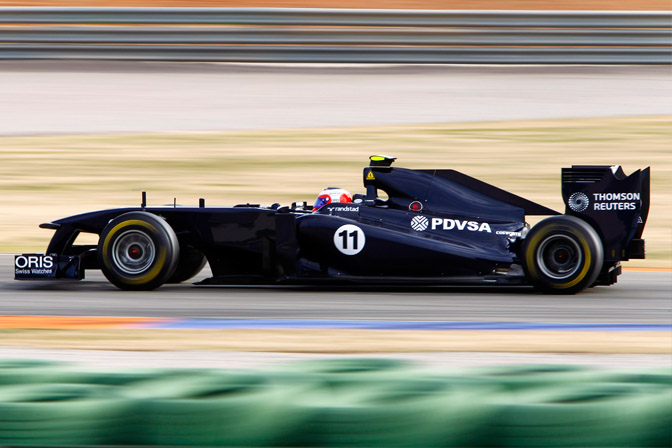 Williams had a low-key launch for their car without their final livery on show. Although the images released by the team don’t show it very well, the rear bodywork is very compact with the engine cover tapering out by the front of the suspension. The rear arms of the wishbones are actually mounted on the rear wing support. Amazing engineering.

You can view a close up detail HERE

This leaves just three teams to launch their new cars for 2011. Virgin launch their second Nick Wirth car next week, while Force India and Hispania Racing have yet to confirm dates. Force India have confirmed Paul Di Resta, current DTM Champion will join Adrian Sutil in the team. If you to read about the cars in more depth I can recommend Racecar Engineering's excellent coverage.

I'm feelin the black and gold... but not as much as the chromey McLaren! This is gonna be a rad season!

These new cars look truncated right behind the engine.

In a few years, side-pods will be so small we won't remember they actually existed. Same for the petrol engine.

Good review Andy. I AM looking forward to the start of the WRC and F1 seasons!!! I love the sauber driver lineup although I feel the exact opposite about the car, the sauber logo is very Swiss and plain, almost like a generic remote control car. The Lotus saga is funny, Team Lotus has a better car design by far, the green and yellow is great, Their alternative black and gold design submitted by an artist during the summer IS leaps and bounds better then the Renault team. The sidepods look great on the Team Lotus car! As a Kubica supporter, I like the ingenuity of the front exhaust on the car, should be interesting to see if anyone copies them, but the car looks terrible, much prefer last years colors.

Hope Brundle and the Chin can provide great insight during the race. BBC > SPEED in F1 coverage.

All these gadgets are great. Formula1 shouldn't be like anything else.

Please keep the mountain biking to a minimum this season,

Awesome post. Thanks very much, id been looking for this info, but its hard to find this kind of detail by just looking at random pics around internet.

Andrew - I agree, the compeition entry really nailed the design. I'm sure DC will be up to job

Weasel - That is assuming he can fit the car, some jurnos at the test were suggesting Mark couldnt fit the car hence why he was slow. This was denied by Red Bull. Personally, I think Red Bull's issue will be keeping up the performance and reliability after last year's title crown effort.

Keychain - I think (but I'm not 100%sure) Lada has some tie in with Renault anyway, plus they are Russian as is a certain driver.

Let's hope Kubica is fine after that nasty rally crash.

We all wish you the best Robert!!!

[View:http://www.youtube.com/watch?v=IAE1yepFabc&hd:600:375] Fast becoming a tradition on the Internet