While looking for some nice build threads for his month I came across this blog called projectDC5. The car belongs to Ronald Gosens who also happens to own Showoff Imports, one of the biggest tuning stores in Europe. I met Ronald almost ten years ago when we were both part of the same crew called Streetlegal Honda. So it was cool to catch up and see what he has been up to.

The car you see before you started life as a standard Integra that was imported from Japan. Ronald used the car as a daily driver and ran the Time Attack series with it last year. But for this year he wanted something that was more competitive. So a plan was made and work started quickly after that.

First the car was stripped, spot welded and painted. Every piece of excess weight has been removed from the interior and instead a custom made roll cage was fitted. I really like the contrast between the orange and white.

From this angle you can also see the custom housing in which the gas tank has been placed. It sits in between the two strut towers for better weight distribution.

A custom eight piece bodykit has been custom molded to the exterior of the car.

The wheels that are going to be used are these orange painted Rota's. They come in 17" and are wrapped with Toyo R888 tires.

These massive JBT brakes at the front will make sure the car will slow down when needed. The brakes in the rear will be replaced with Brembo items.

In the right upper corner you can see some of the stitch welding.

The strut towers got the same treatment. All in favor for a stiffer ride and less body roll.

Another look at the front brakes reveals some parts of the suspension components. It consists of a Track Suspension system, Buddyclub P1 Roll Centre Adjusters and a whole plethora of Ultra Racing struts, braces and swaybars.

Here is a look at the Skunk2 control arms and the Ultra Racing swaybar.

These carbon doors are made by Seibon and will be left unpainted to show off the carbon. This car will also be a demo car to show the people what Showoff Imports can deliver.

On the right is a box with the wiring loom. At first they tried to reuse this loom and remove all the wires they didn't needed but it proved to be impossible. So they started fresh and are going to rewire the car from scratch.

Here we see the custom fuse and relay box. The guys already got a new wiring plan but they are waiting for the Hondata ECU that will arrive next week.

These cool orange brake lines are made by HEL Performance and are connected to the hydraulic handbrake, Buddyclub short shift system and brake force distributor.

I almost forgot the most important thing, the engine. Showoff Imports went to R-Developments and asked if they could build there engine. After a few phone calls the engine made the long trip to the UK and came back reborn. For a full spec list I suggest you can log on to ProjectDC5.

In the middle of the giant warehouse I found another car, this Dodge Magnum. For us Europeans it is still a rare sight.

At the front of the building you enter the showroom with a selection of the parts that Showoff Imports sell. I can still remember buying stuff from Ronald when he still had a small garage besides the house where his parents lived.

On the first floor I found this relax area with a carbon hood that served as a table. On it was a cool article on the Hi Octane GT-R shot by Mark Pakula.

I will pay them another visit when the car will be finished and shoot a full feature. 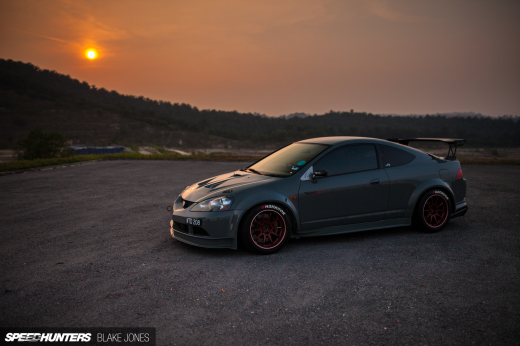 This ITR Does JDM Better Than Japan 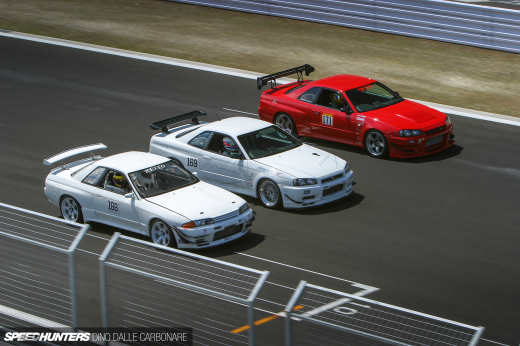 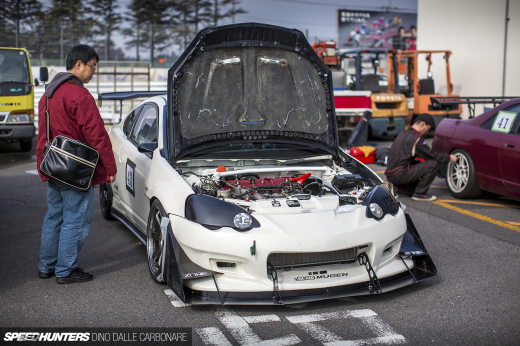 Very very nice, but a big FAIL on the wheels... Don´t get me wrong; I like Rota since I´ve owned a few myself, but a serious build like this deserves some real wheels.

niice.. but whats up eith the rotas.. last time iv seen cheap wheels like that on a grip car they split in half

Not the most baller DC5 build I've seen but it looks pretty cool so far. I like the fuse box.

Cororra, not to start a debate but what car had its Rota's split in half?

Why the hell would they need a hydraulic handbrake?

He, isn't this in Dongen?

well on its way with this one.. these are fast becoming the modified markets weapon of choice..

+ Some special modifications, inside information.

I wish we had a place like that here in Canada , it sucks having to order offline for everything.

Awesome... I hope to build something to this caliber one day!! Good luck to the team this TA season!

Who makes the seat?

why a hydro e brake on a fwd time attack car?

All this money spent and then you buy rotas? I hate the consumers of this industry so much some times.

Not my cup of tea.

Love the wheels, but hate the unpainted doors. Carbon ain't that special anymore, keep the car clean and paint them white!

What are these "fake" wheels you're talking about? Are they imaginary? Wheels are either legit or replicas. Anything round and can fit a tire is real enough for me.

i have that magazine with the gtr. haha.

used to have one of these, great build but you cannot be serious about the BC coilovers...

Looks like the brake lines to the handbrake are reversed

this car is wack...nice engine but all the other parts are just lame...and why is there a hydraulic handbrake???

wtf is with the hydro ebrake?

dude dont underestimate FF machines, they can be fast as hell, i usually only drive AWD and FR machines, but i will never bash an FF, ive seen plenty of serious honda's that would murder my subaru. some guys just love that front drive feel. definitely not a waste of money.

I haven't seen a set of ROTA's split in half. I've seen more TE37 shatter more than ROTA's.

Are R developments not Dutch based? and not UK!

Wow, amazing project! Can't believe all the haters here, but used to it. Gone through that blog; I like the pictures of the work BEFORE it was painted, so you can see the work being done, However, I see room for improvement here and there, but should be a pretty decent TA setup.

Very many congratulations to the team showoff Imports from a loyal customer!!

this car is wack...nice engine but all the other parts are just lame...and why is there a hydraulic handbrake???

Nice feature. It's a shame that everybody is complaining about the brands. But if you would look at which products they sell as a company, it makes perfect sense that they use these. If they can put down good times with a car with these kind of components, they have proven that the parts are working. This will ultimately be beneficial for their company.

Keep up the good work.

Knew the project already from the dutch civic club, love it! And there is explained that it needs a handbrake anyway to park the car when needed and this one is actually lighter then an OEM handbrake+cable. and this way they can leave out the drum brake in the rear discs as well.

How did I guess everyone would be crying about the ROTA's

lol @ people talking about rotas, its funny because i guarantee they don't have baller wheels

Yeah, the Rota hate is stupid. If they're so shit, why do 034 Motorsport use them on their 3-times-Eurotuner-winning 900bhp A4 VR6T? And more importantly, how have they managed to do so if they're as delicate as people say?

Rdev is indeed dutch but arranged that the engine was built in the UK. At least that is what I understood from reading that http://www.projectdc5.com site and the dutch honda forum. I Like the project, but i would have gone turbo instead of NA.... Quite nice to see a Dutch car here, especially a Honda! The guys at Showoff amazed me to be honest, looking at their increased amount of performance related news/projects. In their gallery you can find some other nice cars like that Nissan S14 and a cool Evo x. Thumbs up for this project!

Looks to be quite a nice build, thanks for sharing.

if you read what thijs said and consider that the bias adjuster is probably also a line lock it makes sense altho then it would only need to run to the rear brakes and not also the fronts, but whatever if you've built something better link to it and we'll all go there and critique it. great pics, great car. thanks for sharing.

pretty much people who hate on ROTA's are as ignorant as Dale Jr' fans. The ROTA's are as round as the "real" rims and a lot more dependable.

And nobody could think ? That if you own one of the biggest tuning shops in Europe ? that running rota's is just a marketing thing ? If you run rota's, the costumer will buy ? Indeed, rota's !

Pretty cool to see more of the dutch honda scene on speedhunters.

Hopefully there will also be a write-up of the dutch TA season.

Really like the car, but the Rotas? You put money into everything else, why not use an original design, better made wheel?

Do any of you that are complaining about parts actually race? I gotta tell you that those of us who race respect whatever layout the car is and as long as its on a track its good in our book. Oh and painting carbon fiber so its "clean" give me a break its a freaking track car, the money spent on paint can be used for various other things. Real grassroots and small shop people who race dont care about bling and high dollar parts, that time and time again fail and dont live up to their interwebs reputation, we are more interested in parts that work like they should and their overall value, because money saved on things again can be put to use in other areas. It is nice to see a car that doesnt have a b.s. crushco piece of garbage in it.

And for the last time if FWD is such garbage explain how they run one minute and under times at Tskuba which is the Holy Grail of time attack racing. How about all of you E-bangers put your money where your mouth is and build something better since you think you know the perfect way to build a track car. The closest most of you have been to a "built" car is video games. Go on and try and bash what I say, but anyone who actually races or builds a car not to sit in a parking lot or get in magazines will agree. Most of you couldn't even afford the tires on the rotas your talking all the garbage about.