In many respects this is probably the most impressive car to ever be built in Japan. Forget all your high-budget, tuner-built, time attack machines that we have been seeing at events like the Lap Battle for years, as those cars don’t even come close to this very special S15. Sure many might be faster, barely, but what makes this particular car different is that it isn’t built to smash records in the pursuit of worldwide recognition. The only thing Suzuki-san, the owner, is after is personal satisfaction as every bolt, part and body panel has been tightened, fitted and painted by himself.

Suzuki-san takes care of the driving side of things too, so he is pretty much a one-man team, doing all of this out of pure passion. He competes in the Battle Evome time attack meetings…

…which are held at Tsukuba a few times a year, from December through to mid February in order to guarantee the best possible track and weather conditions for fast times.

Las year Suzuki-san managed a 55.56 sec lap, a time that if he competed at the 2010 Rev Speed Lap Battle event would have landed him in second position behind the Revolution RX7 and in front of the Panspeed RX7. Pretty impressive right?

Suzuki, an office worker by day, spends most of his nights tinkering away on his car, slowly building and perfecting it. His friend Takemura-san, the owner of Scorch Racing, allows Suzuki to use a small space in the garage to work on the Silvia…

…which explains why it wears the Scorch Racing windscreen banner.

Suzuki began taking his S15 to tracks like Tsukuba for a little bit of fun, a stress-relieving way to forget about work. As his driving improved and a few choice tuning upgrades began making the car progressively faster it kind of all began to lose control. The interior was getting more and more stripped out, more upgrades were finding their way under the hood and again the times dropped. It all turned into a bit of an obsession and at one point it was decided to turn the car into a proper circuit-only racer.

It might not be the cleanest of cars, most of the body improvements have been done to boost functionality in one way or another, like the spaced out front fenders that help contain the wider wheels and flow more air into the wheel-wells. Or maybe the protruding front splitter, there to boost front downforce and to smooth under-body airflow. Behind the lightweight 9.5Jx18″ RE30s, shod in GS compounds 265/35 Advan A050s, are prohibitively expensive Brembo Racing 4-pot calipers biting down on 340 mm slotted Endless discs.

At the heart of the S15 is a very special SR. Response has been a goal throughout the development of the engine and Suzuki is very happy with what he has so far achieved. On the bottom end a Tomei 2.2L stroker kit helps boost capacity and sustain the 2.3 bar of boost that are pumped through the Hypertune intake plenum by the Blitz/KKK K27 turbocharger.

The top end is where things get special as it’s been lifted off an SR20VE engine so has variable valve timing built in. This allows the use of very mild Primera P12 cams that are continuously varied throughout the rev range for a broad spread of timing. This supplies instant response and boost pick up at low rpm as well as a massively powerful top end where a max 700 HP is developed! Torque peaks in the mid-range with 470 lb/ft; these are numbers usually seen on 2.8L RB26s!! Suzuki explains that the engine is so responsive and so savage in its delivery that he has had to limit boost in the first three gear to avoid smoking the rear Advans!

The hood, doors and trunk are all custom made in paper-thin dry carbon to shave off as much weight as possible. Scorch Racing gave a hand in the creation of parts like the front bumper, side skirts and wider rear fenders. It all comes in to weigh a little over 1000 kg.

Just to give an idea of how much the rolled and cut stock fenders have been extended outwards! Ennepetal/Bilstein dampers and Hyperco springs take care of the handling along with a string of pillow-ball arms and links both at the front and rear.

This is how you fix a GT wing onto a car! Even pro-built cars in the Japanese time attack circuit don’t run spoilers properly braced to the chassis. The massive Scorch adjustable carbon wing can transmit every kilogram of downforce efficiently to the S15, keeping the rear tires planted allowing Suzuki to carry as much speed as possible through corners.

The interior is, well, functional! There isn’t much going on except a lot of weight saving which has even seen the dashboard removed. A Racepak IQ3 and Blitz boost controller are the only bits of instrumentation while the HKS F-Con V-Pro takes care of the engine management. The big gear lever actuates the Hollinger 6-speed sequential transmission for those necessary instant gearshifts.

Suzuki worked through 2010 on the S15, even fitting a dry-carbon roof to help lower the center of gravity and shave a few more kgs off. The car should be looking a lot different now as he tries to make it more presentable, even thinking of fitting a dry-carbon dashboard in the interior to hide away all the wiring. His goal in the next Battle Evome meetings is to get into the 54-seconds, something a lot of people think the car will not have a lot of problems doing. For a privateer to achieve this with a car he has built and drives himself is nothing short of amazing. We take out hats off to you Suzuki-san!

Now, how about heading to Australia this year for the second WTAC? I know I’d love to see it out in action around Eastern Creek!

A Skyline Japan For Life

Wow Dino, this is a great article!!! I really enjoyed the coverage and how it was written!

OMG this is awesome! Someone should sponsor him to come out to WTAC '11

Wow! This is a real labor of love indeed! Such an awesome car and great write up. Thanks Dino!

The way he chose to fix his rear wing is awesome, it's pretty rare to see this but it's the best way to do it. Thanks for the article.

Any videos of this beast?

Why isn't this car invited to Revspeed Time Attack? Is everyone scared? I mean come on, the time slips don't lie, this car can go head to head with cars like the CyberEvo.

I'm not sure he found a big enough wing...should have gone bigger but otherwise it's a nasty S15!

Amazing achievement for an almost one man's work !

one of the most inspiring car features ive read..

as hardcore as it gets! great car!

(a little dashboard would be nice though..)

this car is full of charm. At 55 secs this car is impressive to say the least

That's the S15 i was waiting for . One of my all time favourites. Up there with the HKS & Top Secret D1 Silvias . Nice work Dino . And yeah , the typical question... Would it be possible to get some wallpapers ?

Would be nice to see some on track footage of that car. Searched on YouTube but couldn't come across anything.

700hp and instant responsive is IMPRESSIVE.

omg. this car is probably one of the coolest things i've ever seen.

Very impressive that he built it all on its own.. pretty crazy if you ask me. This guy has talent.

Very very impressive! We have had recent time attacks dominated by 4WD machines. Looks like RWD is making a great comeback with this and the Rx7s! I'm amazed that he is able to built a 55 second lap time car. It's inspiring. I'll stick to RWD thank you!

Jesus... That thing is absolutely mindblowing! I would struggle to find an FC chassis built to a spec like that. Perfect.

Btw: This car was already featured, didn't it?

This reminds me of reading about old American drag builds. The work was done by one or two guys in some random garage for the hell of it. Go muscle!

Rad. I'm feelin this on SO many levels. Truly amazing.

Best looking S15 I have ever seen. What an amazing article, and car. Great job guys!

i mean look at the size of that turbo o_O! may we have the 5th pic as a desktop please?!

i love it. classic speedhunters cover. although i would love to see the dash properly tucked. might cause a spark or something.

This guy should have been chosen for person of they year awards! He's in my top 10 favorite car people of all time!

Props to him for being AWESOME!

Thanks Dino, I LOVE this car. Love the story of the Underdog beating the Top Tuners in Japan!! Well done to him

this is a really nice S15 and it was a great read.

this is how my AE86 is getting built: with my own two hands.

One of the most impressive one man builds I've seen.

I hope Suzuki brings his car out to WTAC, that would be fantastic. Im so impressed that a privateer can build such a blindingly fast S15. hats off.

this is guy is awesome. this is what most of us guys want to do, but a lot of never do.

My favourite car bar none.

we need more future updates of this please!!!

Is it possible for Speedhunters to sponsor this guy a ticket to WTAC '11?

That truly is remarkable. Props to Suzuki

Great article! Please feature more badass privateer race cars like this. This car/story is exactly what speedhunters should be covering.

What kind of job does he have?? Hahaa

It seems that 99.9 percent of the replies.....you guys have never heard about Suzuki san and his almighty S15???

Where u guys been living, under a rock?

Inspiring. Truly amazing what he has done!

Okay, I have been bugged by this for a while. Please trust me on this as I am well versed in physics. It does not, in theory, matter ONE BIT whether the spoiler is attached to the trunk or chassis. Either way (assuming same height and positioning) it will generate EXACTLY the same downforce. The only thing that could change that is flex in the trunk changing the wing's angle of attack. Considering his lightening measures, this actually might be an issue for his trunk, but it wouldn't be for almost all street cars.

"This guy should have been chosen for person of they year awards! He's in my top 10 favorite car people of all time!

Props to him for being AWESOME!"

HELL YEAH! Im sick of prima donna drifters/racers. This man should have won

That engine is quite amazing!

I will be honest.

THIS has been a lot more inspirational than most high budget, pro built race cars I've seen,

Utmost respect for this man, his passion, his determination, and what he has achieved!

I respect that man a lot more than people getting their cars built by shops. Kudos to Suzuki-san !

Why go to all that efford of building an incredible, inspirational race car only to use the archaic, 30-odd-year-old uneconomical KKK27-based turbocharger, running old type thrust bearings instead of ball-bearings? A garrett GT series would be much more applicable.

So Suzuki-san's S15 build is "a stress-relieving way to forget about work."? Wow, you learn something new in life everyday. Great car and great story.

I just watched this whole video. The other cars had no chance, really. GREAT feature.

my favourite silvia, easy. thanks for the feature!

It was impressive just how many familiar faces I came across at the WTAC last month. Thanks to the success

From grassroot level to international recognition, the passion and dedication of 10 years.
Utmost respect for Suzuki-san 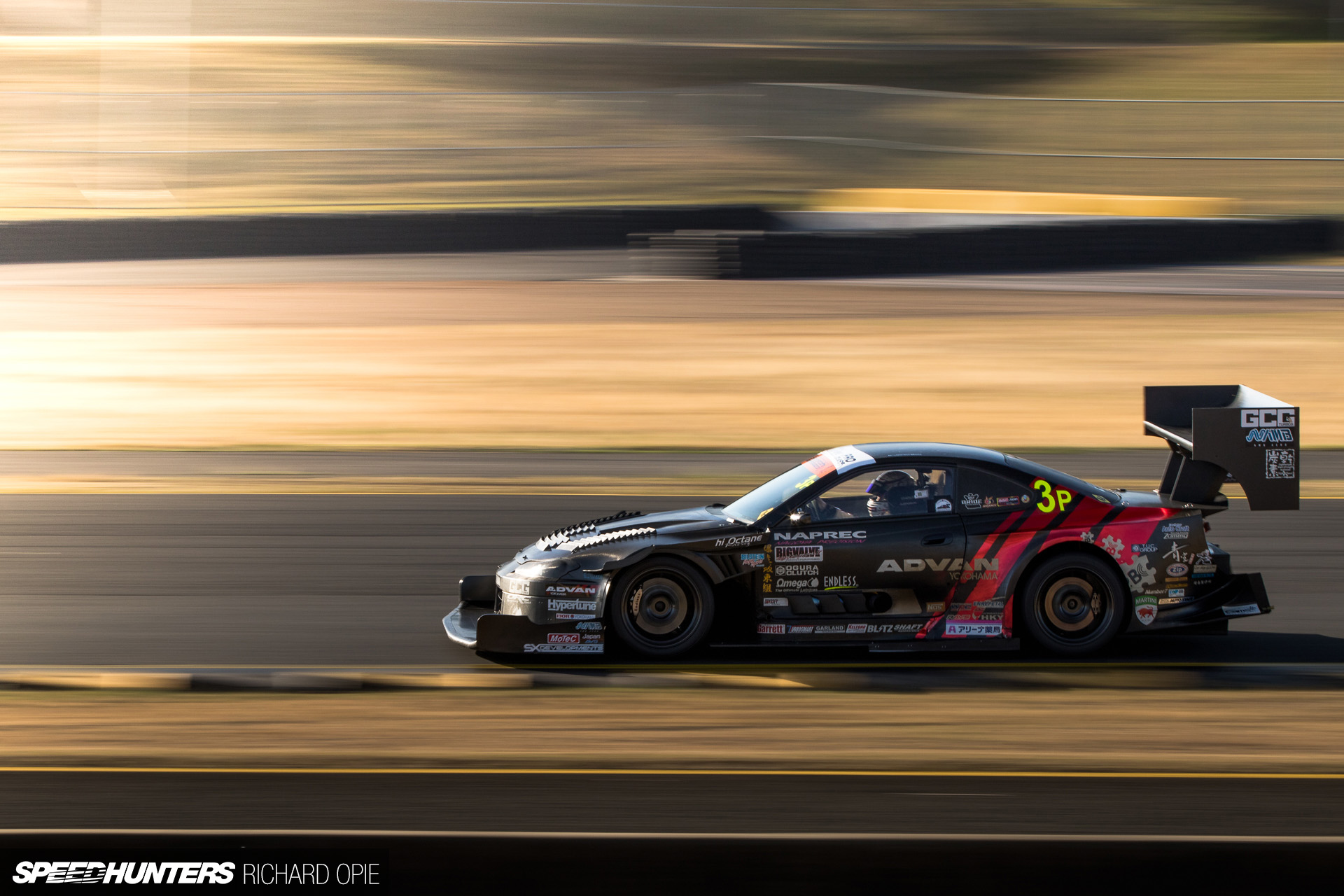