The Lotus name in Formula 1 is in the midst of some controversy at the moment, but last year guest blogger Cheryl Tay visited the Team Lotus (then Lotus Racing) factory in Hingham, Norfolk to gain a deeper insight into the world of F1 racing. The Team Lotus factory is a small outfit, spanning across 44,000 square feet with about 200 employees.

Team Principal Tony Fernandes words of wisdom are etched on a wall for constant motivation and encouragement. The Malaysian-owned team was seen as a bold move when it started racing in 2010, but Tony Fernandes advised me that they're in it for the long haul.

I was shown around Lotus Racing by their head of motorsports development for Asia, Alex Yoong, a former Formula 1 driver. Also joining us on the tour was Daim Hishammudin, a 12yr old AirAsia ASEAN development driver.

Although a small outfit, there is a strong sense of bonding in the air as everyone works together as a closely-knit team.

Look at how intricate modern Formula 1 cars are.

Here Alex is showing us the gold leaf that is applied to the back of the monocoque.

I was told that there are plans to expand the current facility and increase headcount to 240 staff, substantiating Tony's commitment to stay in the sport long-term.

Just look at the size of that autoclave! 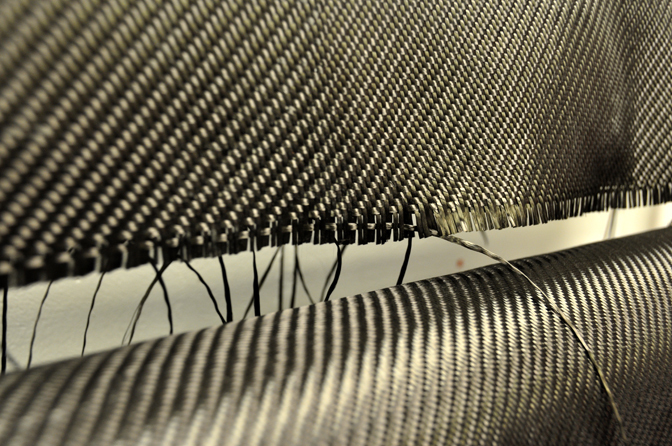 There were endless rolls of weave!

We headed outside where their huge logistics vans were and I almost couldn't climb into the cabin!

The team colours – green and yellow – were evident everywhere…

…Including the green and yellow fruits! 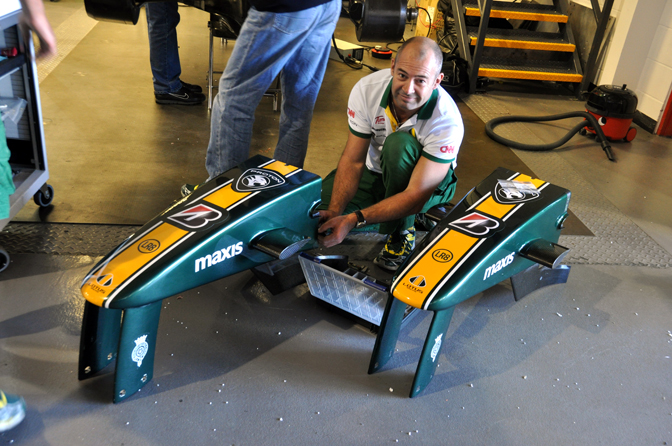 Before the racing drivers go before the five red lights, a lot of work is done behind the scenes to get the car onto the grid. Even the noses are hard work.

One of the great things about Team Lotus is that their factory isn't locked behind closed doors. In fact, you can book a tour of the factory (at specific times when they're not off racing) for just 80 GBP per person.

- Words and Photos by Cheryl Tay

Behind Closed Doors At Garage Active

Awesome.... I cant wait to see what livery lotus comes up with next year... (crosses fingers for john player special)

You obviously have never seen an autoclave for composites.

Many autoclaves are a lot bigger than the one Lotus has.

Did you know (or they told you) that carbon fiber for F1 application has to be stored at a certain temperature?

It amazes me how SP lets everyone write on this blog. The lack of knowledge and random-redundant comments are just mind blowing.

You obviously have never seen an autoclave for composites.

Many autoclaves are a lot bigger than the one Lotus has.

Did you know (or they told you) that carbon fiber for F1 application has to be stored at a certain temperature?

It amazes me how SP lets everyone write on this blog. The lack of knowledge and random-redundant comments are just mind blowing.

Thank you so much for posting this. Really really impressive to see a behind the scenes of motorsports of this level.

Rad. It will be cool to see how next season goes for them... Even though I will be cheering for McLaren, I hope Team Lotus does well.

If they only axed Jarno Trulli for Nick Heidfeld. To be honest they should have dropped Heikki Kovalanien for Nico Hulkenberg as well. Putting mid field drivers in (at best) mid field cars won't get them up to 6th or 7th this season.

whats the autoslave used for? and also the gold leaf on the monocoque?

Speedhunters used to have some killer articles with great photos but it has gone downhill in the last month or two.. This isn't up to the usual standards. Please bring back the old SH

Good lord an Asian woman driving a big rig. God save us...

Hey, how about you not possibly ruin it for other people and not wear open toed shoes into a F1 garage. Thanks.

lets hope that lotus does better in the 2011 season!!!! they have a reputation that they need to live up to!!!

@Braydon: JPS is for the Renault team.

Can i just add to what Cheryl is writing please.

Carbon Fibre "dry" Fabrics do not need to be stored at a certain temperature.

Once the raw fibre that comes off the spool is converted (woven in the above applications), it then goes into a next stage process called Pre Pregging (applying resin to the dry fabric).

Pre Preg Carbon Fibre does need to be stored at the correct temperatue (in large fridge freezers to prevent the resin from melting before production).

If you are storing dry carbon fibre fabrics for "wet layup", "RTM", or "Infusion" processing, then its fine to leave them stored in a dry area out of direct sunlight.

I have gained alot of respect for Lotus from this post.

Whereas the gold foil is to protect the driver from the heat of the engine.

I'm glad to see another one of Cheryl Tay's entries. This place is too much of a sausage fest without her. We need some female perspectives on this great blog of ours.

Nice... reading this blog making me feel i went inside to their facility too.. lol >.<

thanks for posting this guys...

Alex, only in some circumstances are dry fabrics used in an autoclave process, this only happens when a "resin film" is included.

I can catergorically say that 99% of carbbon composite parts manufactured for f1 use WILL be using pre preg.