Time to pick up where I left off yesterday and head to Tsukuba for the second part of the Rauh Welt meeting. As if seeing close to thirty wide-assed Porsches run wild on the highway and regular roads wasn’t enough the best had yet to come as these lovers of all things rough, and wide, were just about to let loose on track.

When we arrived in the paddock there were already some other cars waiting for Nakai-san, mainly people that had made the journey from other sides of the Kanto area. Like at Moriya PA, I had never seen a lot of these cars and it wasn’t until then that I really began to understand just how big of a following RWB is getting these days.

How cool is this, a flat-nose 930 in matte gray. Pure race car feel but still street legal…barely!

Before things got started I headed to the little restaurant in Tsukuba circuit with Nakai-san to grab a quick bite to eat. While waiting at the table with our little curry rice and niku soba tickets I just had to grab this shot! He was working on his car through the night to get it completed and his hands were in a pretty bad state.

…and it was sucked up and consumed in a matter of minutes before getting back to the paddock.

Yet another recently finished car, all ready to head out on track but not before Nakai gives it the final touch, its name “Good Hills Speed”

Simple is obviously best for some. You really can’t argue with the classic lines of the 911 especially fitted with a Rennsport spoiler.

Can you spot the zipties?

With the affordable prices of 930s these days in Japan this remains the most popular choice for those wanting the full RWB treatment. Owners, after some discussions with Nakai-san, hand their cars over and allow him to do his thing…

…treating each car as a blank canvas on which to let his ideas flow onto. Customers don’t even have a say on the color, Nakai takes care of that too and he has yet to find someone that has rejected his choices.

The owner and driver of this 996 is a lady which explains the pink RWB strips on the sides. I wonder if there are any plans to make this a little wilder?

Unlike most track day events Nakai likes to do things a little differently, keeping things as easy and as stress-free as possible for those that have entered. With most of the drivers present having on-track experience and being well behaved there is no need for long a driver’s meeting, you get your number and timing gear and you are pretty much on your way. Nakai did address the drivers briefly to run through the schedule and then passed on the megaphone to Seike-san, the editor in chief of 911 Magazine who was there with his photographer covering the event for an upcoming issue.

At 2 pm the first group of cars headed out and I run to the first corner to begin shooting some action.

This guy was getting the tail out quite often in very smoothly controlled drifts!

Nakai was so busy with keeping things organized that I only saw him head out once with the Royal Montegobay. This new car just looks too hot out on track! I can’t wait to see this develop through the years just like the Stella Artois was.

But wait, let’s not forget the Japanese cars! You may recall seeing this matte back S14 at last year’s Tuning Powers show…

…and this T78-boosted widebody BNR32 from the Skyline Owners Battle last month, both there to join in the fun.

And like at all RWB and idlers gatherings Nojima-san of Nojireal was present with his AE86. He’s the guy that handles the painting at Rauh Welt and is a master at getting those complex matte finishes velvety smooth!

Those SSRs are just the perfect shade of dark metallic silver against that light colored body. Perfection once again!

This car runs the same front bumper as fitted to the Royal Montegobay.

I like big butts and I can not lie…

…I mean how can you resist keeping away right? Another superb 930!

I was going to keep the coverage of this event at two posts but I’ve got so much to show you still that a third one might be unavoidable. Maybe I can squeeze it in before the Tokyo Auto Salon gets going…what do you think, you all want to see more?

Evolution Of The DTM Species 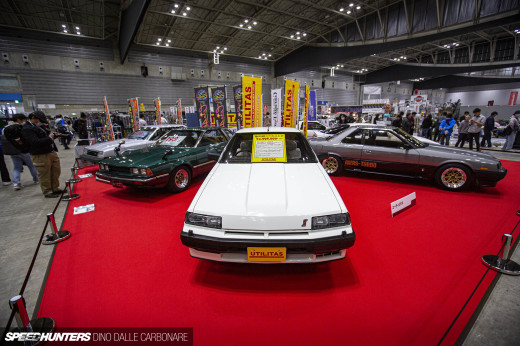 These cars are just in your face, and I guess I'm one of the ones who like them

That matte gray 930 has become my favorite porsche ever

are both is Nojima-san car?

make it four posts, havent seen a good feature on here in a while.

More please! And desktops too!

YEEERRHHHH!!! more please!!! and desktop of either the Orange or the Red cars! but a desktop non the less!

Keep it coming. Speedhunters should make a video of the next RWB track meet.

Some times you just wish these photos came with sound =P

I'd love a 930 like any of the red ones shown. As for if i want more photo's and comentary? you betcha!

We need more coverag so please show us part 3

the "Royal Montegobay bumper" comes from the earlier 993 GT2 evo.

Even if I think Nakai-san's work is admirable, creating those wild (and still street legal) Porsches

Do you really have to ask? It more than made my day when I saw you were covering Rauh Welt again. We need features!

More please, and some shots of narrowbody cars too if possible

My god that is just pure win.

Dino, I can't thank you enough for sharing this with all of us.

The slant nose 930 is an unbelievable work of art. I hope this is not the last we see of that car.

to be honest im glad to see this because most porshe owners are boring and predictable with their mods. not to offend anyone. because of this i have never been interested in porches. i am now.lol. good post dino.

More for sure! I'm really feelin the white slant nose! I can't believe how rad Montego Bay looks on the track! I'd love to see a feature on both of these..!

Where does he find the names for the cars lol..

Dino, if you could just keep tabs on this place, that would be great.

i cant get enough of this guys work, these cars amazing

Any more shots of the camo "Master Piece"?

MORE PLEASE!!! Great coverage, I love the rough world cars! and desktops of the silver 993 please!

HAae you got any times for the cars around Tsukuba?

3rd installment is a must!

I really like the classic 911 fitted with the Rennsport spoiler because of that small track shaped sticker... SAVE THE RING !!

VIDEO request to hear those Porsches screaming around tsukuba. Nakai-san needs to build a Time Attack prepped Porsche to compete against the top Lap Battle cars like Tarzan's EVO and Suby and the carbon RX7. Porsche owns most racing series it enters, I'd like to see it make a go at time attack too!

Definitely more... and video too

Say it with me,

Not flat nose. Slant nose. Also, I love that purple one.

The man cannot disapoint, how he improved on a masterpiece like the stella artois is beyond me but royal montegobay is just amazing!

964 is my favorite Porsche ever in stock body but that last red 930 has me re-thinking what an ideal Porsche looks like.....

Please sir, can we have some more!

It's a crime not to have some desktops in these! Features aswell!

tommy was the original 933, and Master Piece is the appropriate name for nakai's 930

MOAR!!! i cannot lie, the coverage of the rauh welt vehicles (the porsches esp of course) on speedhunter are my favorites!! keep them coming!!

Otherwise the red one you talk about in the end, for me it's not a 930 but a 964 RSR if you look at the mirrors, the front bumper and the rear wing no ?

Dino you just have to do a feature on every single RWB cars seriously and PART 3 IS A MUST!!

love the coverage.. as much as i love 'Porkers' - i bet the sound there is awesome - its great that some other folks made it out too e.g. the Nojireal/AE86 & Skyline and S-Chassis boys... cool

keep it going. deskstops are a must at this point. RWB FTW

Desktop of the 2nd to the last pic pls!!!

Dino, i love every features you post! Could you ask Mr. Nikai if he ever planning to mass produce those S14 front fenders. thank you

i wonder what was the turning point for nakai that he switched cars. maybe his 930 cant be developed further? or maybe it under going more extreme RWB treatment. or maybe tommy (the blue porsche) has a part which convinced nakai to switch it up. and that royal montegobay is definitely wide!!

where the hell does he even find tires to fit on those wheels?! O_O

Too cool, especially the white-on-white 964. Beautiful!