Time for Photos Of The Year already – 2010 has gone by like a flash! While all the noise in this season’s SUPER GT was about Honda’s new-for-2010 HSV-010GT, the car that showed the greatest consistency all year long was the Team LeMans LEXUS SC430.

With equal finesse, the Quintarelli/Matsuda pairing in the CALSONIC IMPUL GT-R brought them the win in Sepang on the way to fifth in the championship.

Sportsland SUGO is a compact and hilly circuit, with lots of challenges for the drivers. Rookie Hamaguchi-san took his first podium of the season here. He was victorious later in the season.

Still at SUGO, I just loved the way this Aston Martin Vantage GT2 was launched over the kerbs by Hiroki Yoshimoto during the first qualifying session.

Richard Lyons and Yuji Tachikawa once again put in some seriously strong performances, though wins or championship glory once again eluded the pair.

The car that went through the greatest number of livery/colour scheme changes was without doubt the #31 Evangelion-branded Corolla AXIO, seen here in its second guise of 2010 at the Fuji 400km event in May.

Newcomers Melvin Choo and British endurance expert Tim Sugden drove the only foreign-entered car in this season’s SUPER GT, the Mosler MT900M, developed specially to suit the Japanese championship’s rules. The team is scheduled to be back next year, with the advantage of being based in-country in 2011.

As well as SUPER GT, I was fortunate enough to cover a number of ‘non-race meet’ events this year, the first of which was the New Year’s Meeting, held in Odaiba, on Tokyo’s waterfront. I’m pretty weak for Toyota 200GTs – I mean, who wouldn’t be?

The Ferrari Festival, held at Fuji Speedway in early June, was kind of a mix of ‘race-event’ and show, with the owner-participants clearly having all the fun!

Also out at Fuji, Super Taikyu took in a four-hour battle in heavy June rain. Gotta love that 4WD.

The historic rally scene had a few really stand-out events this year, the most well-known of which was once again La Festa Mille Miglia, being run for the fourteenth time in 2010.

It’s all serious work – but there should also be time for a few laughs now and again.

The debut of the NISSAN GT-R RC in Super Taikyu was noteworthy, the car setting the fastest lap of the day at a dry Fuji on the day before its race debut.

Back to historics. It’s the people that make things so memorable, and this guy’s a prime example.

After a disastrous start to the season despite scoring pole position on its debut, the #18 Weider HSV-010GT of Takashi Kogure and Loic Duval scored another top time for Round 2 at Okayama (above), and this time made it stick with a lights-to-flag victory in a precursor to the team’s ultimate success later in the season.

Back at the New Year’s Meeting (coming up again in only three or so weeks folks…) this pair of Hakosukas on contrasting-coloured wheels impressed.

For me though, it just doesn’t get any more beautiful than ‘les voitures anciennes’ – the original Grand Prix machines.

Back to the modern world and the late-afternoon sun at Suzuka made for a pleasing shot of the Team Cerumo SC430 during Super Lap in the season-opener.

At the season’s ‘other’ long-distance event, the 400-km round at Fuji in May, the Kraft SC430 took victory after employing a winning strategy. Would the squad be able to repeat the feat for the 700-km event at Suzuka in August?

One of the most successful teams in Japanese motorsport history, TOM’S make it look so easy.

Suzuka is a circuit with so many unique attributes. Watching this pair of GT300 machines match each other through the Esses in the 700kms was a treat.

But it doesn’t always have to be about racing cars…This pair of F430 Scuderia with a dusting of early morning dew stopped me in my tracks.

The thing I enjoy about this image is the menacing look of the car. It’s like looking into the jaws of a man-eating shark!

One of my favourite spots at Fuji has to be the entry to the hairpin, depending on whether it’s really windy or not. On a clear day it can be quite close to perfect.

I was recently told by a highly reliable source that this is the only F50 GT in Japan – amazing! They should have all looked like this IMO.

The Golden Age as they call it – I just can’t get enough. The lines, the design attitudes are all amazing. Seeing a machine like this sixty years ago when it was released must have been breathtaking.

SUPER GT’s annual Equatorial jaunt to Sepang is always a festive occasion, with the added benefit of seeing the GT3 Asia guys running a pair of support events over the course of the weekend.

As many fellow Speedhunters will already know, I’m something of a
design/aesthetics geek when it comes to cars, hence the love of old
racing machines.

…Though it’s by no means the only area I adore. Modern GT cars are the centre of that world…

And when design icons like this Ferrari FXX come within eyeshot, I can hardly be restrained!

Another interpretation of the ultimate in automotive design came last month at the Japan launch of the Aston Martin One-77.

But it’s the influence of the old racing machines that ties
everything together for me. This Maserati 300S epitomises the grace and
speed of an era that can now only be imagined.

On that same weekend, the battle at the front of the GT300 class lay
with the Ferrari F430 GT and the pair of Nissan Fairlady Z entries, the
Hasemi Motor Sport example having taken the 2010 Driver’s title just
weeks before.

This is from the Mooneyes-organised All-Odds Nationals that took
place over one day in late September. I’d never before seen a Mazda Luce
that made me look twice – but this one certainly did!

Another automotive/motorsport-related event, another weekend in
Odaiba (Tokyo’s waterfront district). The R33 Skyline above is the JGTC
machine in which Erik Comas took his first of two back-to-back Driver’s
titles. The second came the following season in the then-brand new R34. 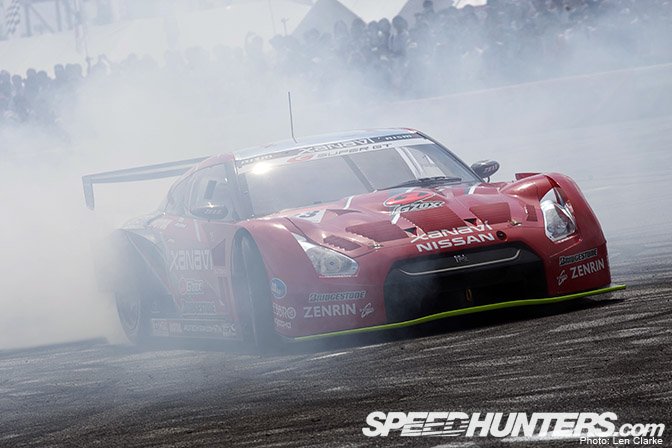 The same team’s challenger ten seasons later, looking every bit as menacing as it emerges from the wall of tyre smoke.

He’s a monster! Tajima-san smiling after giving one very memorable demo-run at this year’s Motorsport Japan in October.

New for 2010, the post-season shindig known as the JAF Grand Prix
Fuji Sprint Cup brought in a bumper crowd, featured the nation’s top two
categories (SUPER GT and Formula Nippon) on the same bill, and had the
fans on their feet every time the Minor Touring Car Race entries went
out. This is something that should happen every season!

I suppose I couldn’t really ‘not’ include these next two images.
Seeing one factory car going out on its debut is one thing, but having
it inadvertently take out the automaker’s other factory car, at the
firm’s home circuit in front of all the top brass is just depressing.

Thankfully the only bruising was to Kogure-san’s ego – and he managed
to end up with the title anyway. Curious that the foam barriers are so
‘fire-friendly’.

Fuji Speedway was transformed in June when Ferrari took over for its
annual festival. It was a feast of everything red and desirable – and
more!

Going in to the final round of the season, the Team LeMans SC430
still had a mathematical chance of taking the crown. It all went
pear-shaped only minutes before the race got underway when the car
exited the pit lane under a red signal.

Sepang never fails to deliver an exciting, unpredictable afternoon and 2010 was no different.

Though you wouldn’t know it from the image, the stretch of tarmac
from Sepang’s turn three (background) to turn four is well over a
kilometre.

The main straight at the Malaysian circuit is the second of two
almost-identical sections of the track. Above, having won in 2008 and
again in 2009, the KONDO RACING crew were wondering whether they’d be
able to make it a hat-trick of victories on Yokohama’s super hard ADVAN
rubber.

The longer the straight, the harder the braking. Fuji Speedway, Sprint Cup, November 2010.

SUPER GT allows race fans to get up close and personal with the cars
on a number of occasions every race weekend. This is at about 7:45 on
Sunday morning before the cars head out for the warm-up session.

Repaired and ready to race. The ARTA HSV rumbles down the pitlane at Okayama in Round 2 of the season.

Okayama is another of Japan’s ‘compact’ circuits, with lots of 90-degree corners in its tight layout.

One of the most exciting battles of the entire SUPER GT season. These
guys are battling not for the lead, but third place in GT300. The pair
kept up a wildly impressive fight lap after lap in the season finale at
Motegi.

Benoit Treluyer finds a new line around turn 1 at Fuji. Kerbs, what kerbs??

The quartet of 599XX at the Ferrari Festival were as beautiful as they were intense.

A few of the Prancing Horse’s most successful weapons were also on
display – and were apparently run on the ‘private’ day that followed the
event.

On a different (rainy) day at Fuji, the Okabe Jidosha RX-7 in Super
Taikyu, which had started so promisingly, came to a halt directly in
front of me.

That series’ dominant car over the last few seasons has been the BMW
Z4M Coupe, seen here battling the rain as it heads up the hill from
Dunlop Corner.

Size Does Matter. Just ask the driver of this behemoth, a 1928
Bentley heading toward the starting block of this year’s La Festa Mille
Miglia.

And so to the end of another post. I thought it would be fitting to
come back to that quip I made earlier about design and aesthetics.
Japanese automakers have produced many absolute beauties over the
decades, and seeing the rear section of this hakosuka with its massive
Watanabes is worth a thousand words on the subject.

I dont mean to be rude but turn 3-4 at sepang is not well over 1km. Sepangs longest straight, its main straight is just over 900m.

I noticed a new trend in Japan when working on the cars some teams are going thru the gears at a fairly fast pace,now correct me if I'm wrong, but last time I checked Japan is a sismic part of the world...hate to be the guy under the car in the event of an earthquake does anyone know if they use a safe way to do this? it looks like few wood blocks are keeping the car elevated,just an observation....great pics..keep up the good work HAPPY NEW YEAR 2011!!!!

Thanks for your coverage of Super GT and Japan throughout the year Len hope to see more of your great work in 2011.