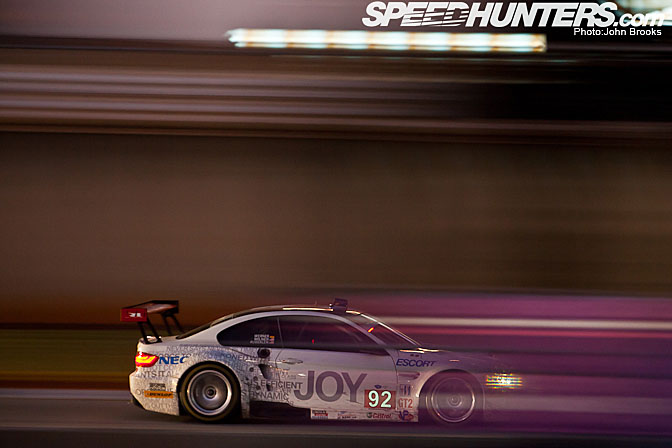 In any kind of competition the real excitement, the real edge comes when the Big Dogs square up to each other. At the tracks that means the manufacturers, sure the racing can be good when private teams are running against each other, see GT1 and GT3 for example but the stuff of legends is only really possible when the factories do battle. In endurance racing there were two arenas for these contests, Le Mans Prototypes with Audi and Peugeot going toe to toe with their fabulous turbo diesels and Le Mans GT2 where Porsche took on Ferrari, Corvette, BMW, Aston Martin, Spyker and Jaguar. It was the Rumble in the Jungle meets the Thrilla in Manila, and we were fortunate enough to witness this contest.

Although not competing for an overall win during the ACO rules' races, the competition in GT2 between these proud brands and teams was as compelling as any in the sport. In fact if one is honest the real 2010 ALMS action was GT2 as the prototype field was rather thin except at the first and last races. The battle of the Gts was what the punters paid to watch.

The pre-season betting was on the Risi Ferrari and the Pratt & Miller Corvettes dominating and sure enough the Ferrari triumphed at the classic 12 hour romp through the Central Highlands of Florida helped by the two Vettes colliding in the pit lane.

Risi seemed to have the whole season calculated…………………

And yet the GT2 Team and Manufacturer titles went down to the wire, they were decided on the last lap of the last race when the Risi Ferrari 430 ran out of petrol on the final uphill section of Road Atlanta, giving victory in the Petit Le Mans to the grateful Pratt & Miller Corvette crew.

Corvette have been an integral part of GT racing since their arrival on the scene in 1999 and have developed a fearsome reputation as competitors but 2010 they had to face their first serious opposition in the ALMS since 2006. They did not trample over Risi Competizione, Flying Lizard nor Rahal Letterman which only illustrates the quality of the opposition.

The Manufacturer's title went to BMW and the Team's honours to BMW Rahal Letterman Racing by the most narrow margin imaginable. For those who wish to recall the Georgian classic the reports can be found HERE and HERE .

We have followed Tommy Milner here on SpeedHunters so have the inside track on the team and the season.

You can find those posts HERE

The Drivers' title went to the Flying Lizard pair of Jorg Bergmeister and Patrick Long, leaving Ferrari and Corvette out in the cold.

Patrick Long, one of the GT2 stars.

Jorg Bergmeister, an all round good guy.

Porsche have parachuted in ex-employees to help their teams, in Europe Norbert Singer helps out Felbermayr, while the Flying LIzards get the services of Roland Kussmaul.

The huge crowds that flocked to both Road Atlanta, and earlier in the year, Sebring, understood that this was racing of the highest standards with the factories going right to the edge and sometimes over.

Unlike one class or spec racing the variety in class performance created even more drama, particularly at a narrow switchback circuit like Road Atlanta, there was always something going on with the prototypes carving through the GT2 pack every six or seven laps. Breathless stuff.

Now and again a bit of solitude could be found.

But for the most part it was madness. The high standards of the factory teams meant that the two new privateer outfits had a big hill to climb to get some degree of parity. Scott Sharp's Ferrari outfit certainly got there and were rewarded with a second place at PLM.

The Falken Tire Porsche and crew were an instant hit, especially on the grid.

But Falken let their performance on track speak for itself.

Which is more than can be said for Jaguar. Oh dear.

We got a glimpse of the future at Road Atlanta when Porsche brought their Hybrid out to play. Motorsport's ability to develop technology under pressure will be the salvation of this pastime, it will make the sport relevant.

And long may it be so.

The photos are great!

In the first photo, it looks like first-curtain sync is used. Wouldn't it look better if you used second-curtain sync? Then the streaks would be behind the car, and the car wouldn't appear to be going backwards.

i want the exif

It looks like Jag. has changed to Diesel racing!!

these pictures are absolutely stunning!

Lol at "SUX" on the wing endplate

Jon Brooks, you are at the absolute peak of motorsports photography and knowledge, I cannot say thank you enough, ever.....please do not ever leave Speedhunters!

@M: What you see is obviously the 92 bmw entering warp speed.

@everyone thanks for the Seasonal goodwill, much appreciated with the freezing weather outside

@M thanks for the advice and it is a valid point, however I did not use flash when shooting that particular image: EXIF Canon 1d MKll, 500mm, 1/15 at f8, ISO 640, manual exposure, manual focus RAW, and minimal fiddling in Lightroom. This is what I wrote to a reader when the image first appeared.

"what you are seeing is the car going behind one of the awnings on pit road, that's why the lights have that strange pattern.......at 1/15th of a second the car is travelling around 30 feet during exposure so you get the panning effect.......and other strangeness.

Shooting this kind of image is high risk, most files end up in the bin and frankly I was too tired at the end of the race to spend sufficient time there but I did luck into one or two bits of magic.

@D1RGE.EXE thanks, I can carry a tune as they say but I think that I have some way to go to match the output of the likes of Schlegelmilch, Alexander, Cahier or even in my field Rick Dole, I'll keep plugging away, there is no alternative.

Any chance of getting desktops of the BMWs? Great shots! Must be an amazing experience to get up close and personal with the ALMS like that.