Perhaps now would be a good time to look at those races that I attended and that were not run to some version of the rules governing the Le Mans 24 Hours. There was a considerable variety but I suppose on reflection the stand out event in 2010 was the Nurburgring 24 Hours. I went straight there after the Spa 1000 Kilometers so had a whole week marinading in the automotive juices of the Nordschleife. 170 cars started the main event with factory supported entries everywhere and in every class.

Most of Germany seemed to brave the hostile weather conditions to congregate on the grid, fortified no doubt by the fine local produce, sausages and beer, especially beer.

Of course I was lucky enough to get a proper vehicle to get the job done, the Audi A6 AllRoad was a real star.

And there was even a little bit of fun to be had roaming around in the wilds.

And at the Nurburgring you are never sure what you will see bounding over the horizon. So when a classic M1 bursts into view it just seems right, the howl of the Straight Six echoing away as 70’s classic disappears into the Eifel countryside. What next?

Having qualified only in 7th place the #1 Manthey Porsche vaulted up the order to lead the Audis by the time the pack headed out into the countryside.  Lap 2, as can be seen, Marcel Tiemann was running away from the rest of the field. making something of a mockery of the balance of performance calculations. It was for Tiemann, a five time winner of the event, something of a swansong as he is unlikely to ever compete on the Nordschleife again. A week after starting the 24 Hours he was the innocent party in a massive accident at Imola sustaining fractured vertebra and severe brain trauma. He was kept in a coma for many weeks while the doctors fought to save his life. Thankfully he is slowly recovering but for a while it looked very bad.

One by one the Audis had problems either mechanical or contact with other cars or barriers, so during the long night their challenge evaporated.

The Manthey Porsche also retired and their attempt to take victory for a fifth time in a row was over. Another Porsche took up the challenge, this one, the Hybrid, looked to have the race sown up but with only a few hours to run stopped out on the circuit with some sort of engine failure.

So as the clock ticked on towards the 24 Hour point the surviving werks BMW M3 GT2 took the final turn at the head of the field, where it stayed to record the 19th win in the Nurburgring 24 Hours for Munich’s finest.

A massive crowd and a massive entry and for 2011 a date change to late June can only mean that this classic will grow in stature.

SpeedHunters was all over the 2010 edition as can be seen HERE In fact not only did we report on the N24, the Team Need for Speed BMW Z4 ended up an amazing 4th overall.

If Nurburgring’s star is in the ascendent, perhaps the Spa 24 Hours is less so. The GT1 cars that have dominated the race this century disappeared over the horizon in pursuit of the FIA GT1 World Championship so a mix of GT2, GT3 and GT4 cars contested the Ardennes classic in 2010.

As with both Le Mans and Nurburgring the organisers of the Spa 24 Hours believe in taking the participants to the audience. This interaction is one of the great strengths of long distance racing and encourages a loyalty that other races struggle to inspire. Sebring and Petit Le Mans also have this quality, everyone feels part of the action, a shareholder if you like. 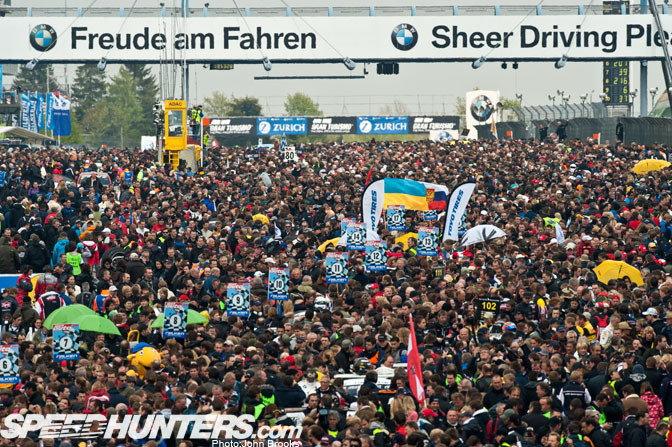 In a reversal of the Nurburgring race, BMW led at Spa most of the way till in the last hour a track rod failure dropped the M3 GT2 down to 3rd.

So the BMS Scuderia Italia Porsche came through to win. The SpeedHunters coverage at Spa can be seen HERE

Mention of GT1 brings us on to the new FIA GT1 World Championship which we have followed extensively HERE on SpeedHunters.

The first year of the Championship must be judged as a success with full field of competitors and some great racing that puts DTM to shame. There was overtaking a plenty and few dull races.

That does not answer the questions that are looming up for the Championship in 2011. Where are the next generation cars to be found, given that the Aston Martin DBR9, the Maserati MC12 and the Corvette C6.R all drop out of homologation at the end of the year. Who will replace the Ford GTs of Matech who have quit the series? This issue is compounded by the fact that the ACO has dropped all GT1 cars from their races. Is it economic to build a new car with the potential sales limited to four examples?

The whole question of how the business model will work is also up in the air.

However such points are for the future, so let’s raise a glass to Stephane Ratel and the SRO who have defied many naysayers and doom mongers and delivered a credible and exciting 2010 Championship. Salute!

Perhaps this sums up my feeling towards the track action that I have been fortunate enough to witness these past 12 months.

It is Christmas Eve here in cold and grey Surrey, so to all of you who have joined me on my journey in 2010, even just part of the way, may I wish you Compliments of the Season and hope that you and yours enjoy a prosperous, happy and healthy 2011.

Final parts next week, first there is a turkey to stuff rather than to write.

missing some hondas in here yeeeaaaa

Great read. Keep up the great work John! Your slow speed panning shots are artwork. You are my idol for those shots, now if I can only bring up my hit rate....

When looking at all those pictures I actually realized how fast the year went by. I remember the March Special on GT-R's (R3x) or the 24 hr race like it was yesterday. damn!

i LOVE the shot of the M1 coming over the crest, is there any chance you could publish a Desktop-sized version?