Interlagos served up a pair of top-class races as we build to the end of the season: excellent on-track fights for position with generally far less damaged body panels at the end than we've seen at previous rounds. It showed that putting the big GT1 cars on the right sort of track is crucial: these cars need space to breath, especially in races which are so relatively short. Vitaphone delivered once again, though this time it was the #2 car up front, crewed by a pair of Brazilian drivers – the #1 suffered from carrying maximum success ballast but still, as usual, managed to bag a couple of points to keep their championship lead healthy.

It's been the drivers themselves who have called for a crack-down on driving standards (of course, it's always someone else…), and the FIA have reacted with the threat of severe penalties for elbows-out contact. Two cars would carry across grid drops for misconduct during the Navarra race: the #24 Reiter Lamborghini Murcielago and #5 Matech Ford GT would both be docked three grid places for the Qualifying Race in Brazil. After qualifying they'd fall back to 21st and eighth respectively on the grid. #5 driver Thomas Mutsch was lying second in the championship, so needed a good result. What he didn't need was what happened just three laps into the Qualifying Race.

…and the #13 Phoenix Corvette pilot Marc Hennerici is still just in touch as well – co-driver Alexander Margaritis missed the opening round at Yas Marina and the points #13 scored there.

Qualifying saw local talent Enrique Bernoldi and Xandi Negrao on pole: the first of the season for the #2 Vitaphone Maserati MC12. They were just 0.027s faster than the #38 All-Inkl Lamborghini Murcuielago and a tenth ahead of the #7 Young Driver Aston Martin: the Astons were looking good here, even standing still.

The other All-Inkl Lamborghini? Well, they were second to last in Q1 and going to drop out, but driver Christophe Bouchut had other ideas. He simply stayed out when the flag dropped at the end of the session for another lap. And another. And another. Three times he crossed line–  and then when he finally deigned to come in he cut the pit-lane entry line. Naturally, the stewards didn't take kindly to Bouchut's flouting of the rules: instant disqualification was flashed up. But not just from Qualifying: but for the whole event, plus a €2,000 fine. At the time I couldn't work out was going on: there was a red flag for the end of a session, but still the Lamborghini blasting round. I would have liked to be in the driver debrief to see what excuses Bouchut came up with!

The #1 Vitaphone MC12 didn't make it out of Q1, but they were carrying maximum success ballast. For Sumo Power's #22 Nissan GT-R it was another disappointing qualifying session as they only managed Q2 and 12th; at least #23 made it through to Q3 and sixth position for the Qualifying Race. The parc fermé for FIA scrutineers – where all the cars were pushed to after each timed session – was located just under the bridge to the media centre, giving some good views from above of the $20m car park. From this angle you get a different sense of perspective on the size of the cars – and it makes clear the ocean-liner length of the Maserati.

Another thing that was in no doubt was the pounding tyres were getting: this is the slick that came off the #23 Sumo Power Nissan. Is it any surprise that the kerbs need constant painting?! They need to switch brand.

After a couple of hot but overcast days, the skies were mostly blue for the racing. As the cars formed up for the Qualifying Race it was the poor grid girls who had to bear the brunt of the heat – at least they were given bottles of water. The teams left it was late as possible to send their cars out, and most of the drivers stood in the shade by the side of the track.

But the grid girls looked pretty unflustered, despite the heat and the volley of wolf whistles and even marriage proposals coming from the big crowd in the grandstands lining the straight! Ah, Brazil!

The atmosphere really was something, with the circuit commentator getting the crowd on their feet, shouting and clapping. I've never experienced such a festival feel at a race before!

Surprisingly there was a clean start at the start of the Qualifying Race: all 22 cars streamed into and through the Senna S with only the slightest whiff of tyre smoke.

Straight away things went wrong for Warrren Hughes in #22: he made contact with the #6 Matech Ford GT on the second lap – both spun and dropped to the back of the field. Warren would be stuck behind the Mad Croc 'Vettes and SRT Nissans for half the race…

Lap three and the #5 Matech Ford GT was heading off the track, all wheels locked and smoking, after colliding with the #25 Reiter Murcielago. The Ford was out on the spot, stopped on the old banking of the original turn one; #25 retired at the end of the lap – they've been hit with a five-place drop for the Qualifying Race in Argentina this coming weekend.

After showing so well in practice, the #11 Corvette piloted by Brazilians Sergio Jiminez and Claudio Dahruj just couldn't keep up with the regulars – their initial pace advantage ebbed away over the weekend. At the sharp end, #2 lead but was chased hard by the #7 Aston right up to the pit-stops: I stood around the pit exit as the leading cars came in for their driver changes, expecting the normal fast service from Vitaphone to keep #2 in front: but no! Around the corner came the howling Aston, followed by the Maserati… Advantage Young Driver.

#22's fraught race continued, as just before the stops Warren Hughes came together with the equally misfortunate #11 Corvette: the C6.R ended up going into the Senna S backwards, but was luckily avoided by the following cars. Impressive tyre streaks!

From this angle you can really see the sector two switchbacks, how you get three tiers of cars going in different directions with the ever-present Sao Paolo backdrop.

The #2 MC12 initially kept on the tail of the Aston, giving me a great battle to watch each lap, but then disappeared… They'd been given a drive-through penalty for a mechanic throwing a wheel during the pit-stop (wheels have got to be carried back into the garage) and the Maserati dropped back three places. They then spent the remaining laps harrying the #38 All-Inkl Lamborghini, finally taking it and fourth place with just two laps left. The win for Enge and Turner moved them up to third in the championship; Peter Dumbreck had a hard-fought stint that got #23 into second place: another podium for Sumo Power!

Right from the rolling start of the Championship Race Peter Dumbreck in #23 harassed leader Darren Turner, never dropping far behind.

Just behind the Nissan was the #10 Hexis Aston Martin. It was great watching them from the bridge over the track as they scrapped through the Senna S, a mix of staccato down-changes, protests of engine revs and destabilised rear ends all coming together for a (sometimes) graceful slide into the first apex.

#22's hoped-for progress from the midfield didn't materialise: they struggled round before retiring the car with a vibration just after Warren Hughes swapped with Jamie Campbell-Walter at the stops.

Michael Krumm had taken over the #23 Sumo Power Nissan in fifth place after a problem at the stop had cost them three places: the #40 Marc VDS Ford GT closed up in the second stint and barged its way past on the final lap. Cue a very unhappy Sumo Power team.

But it meant another strong finish for Bas Leinders and Maxime Martin in #40 – a team that actually had their cars up for sale a couple of weeks back.

The other all-Brazilian car, the #34 Triple-H Maserati, didn't fare well, finishing near the back along with the #11 Mad Croc Corvette – they also had another race to forget. It was such as shame, after the promise of practice!

But no one would begrudge the winners of the main Championship Race at Interlagos: after running fourth for the first half of the race, the Brazilian pairing of Negrao and Bernoldi forced their way through and into the lead with 10 laps to go. A slightly dented MC12 took the flag a coupled of seconds ahead of the #7 Aston.

A strong third place for the Phoenix Corvette gave Hennerici much need points: they crossed the line just two tenths ahead of the #10 Hexis Aston.

But second place for #7 moved them another step closer to the leading Maserati crew, and the Enge/Turner combination overtook Hennerici in the points: they now lie second with just the final races in Argentina left. 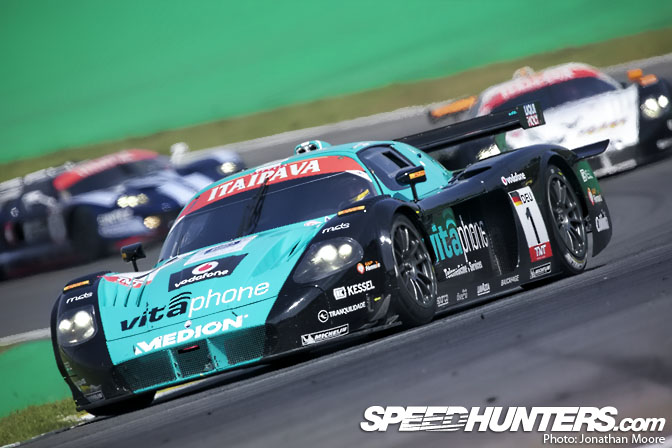 As the sun set, the teams quickly went about yet again packing up all their kit into containers. There was a rock concert atmosphere, as the whole pit building was vibrating to the pounding of a band playing on the first floor, just above the garages! It didn't make for an easy break down.

The sea-freight containers had been trucked to Interlagos, and would now once again take to the road: this time for a four-day marathon trip across South America, to the San Luis track in Argentina. Sumo Power's container has one of my camera cases in, so I'm rather hoping that everything arrives in one piece…

To complete the rock excess, the luckiest drivers even got choppered out of the circuit. Now that was just showing off.

So, that was Brazil. What an incredible weekend! There were so many highlights, but a particular one for me was talking to ex-F1 racer John Watson in the press room, who was there to do commentary for the TV coverage. I got a great insight into driving the old Interlagos – plus recommendations for some good Malbec red wine for when we hit Argentina!

Great coverage Jonathan! I can´t wait till tomorrow to go from Chile to Argentina just to watch the final round of the championship hope to see you around!

For me i´ll be a looong journey.

is there a possibility that vitaphone had too much OZ racing wheels,

they'd look great on my car,tough I had to change the hubs.

nice coverage! did anyone notice the bent lip of the front wheel on the Ford GT in the second picture?

Last sunday i was there in interlagos and I saw Jonathan Moore, bur unfortunally I cant talk with him, but it was awesome to see speedhunters here in my country! =D