Let's have a look at another major tuner that was present at the Essen Motor Show. Usually Techart has a stand of their own but this year they worked together with tire manufacturer Continental. Techart brought three cars with them that included two new versions. One of them was their take on the Porsche Panamera dubbed the GrandGT.

This was by far the best looking Panamera at the show. Techart has been able to totally transform the look of the Panamera that looks pretty dull in it's original shape. It all starts with the newly designed front bumper that has larger air intakes that sends more air to the intercooler. It also has an integrated carbon splitter.

All Techart cars are outfitted with the cool LED daylight running lights you see in the larger air intakes. It holds both running lights and turn signals.

The car has become a lot wider thanks to the flared fenders. The front gained an extra 21mm on both sides and the rear got an extra 42mm on both sides. The front and rear fenders have two air outlets that are functional and are made from high quality polyurethane.

I love the design and finish on these Techart Formula III wheels. They are available in 21 and 22 inch. Techart didn't change the stopping power according to their press release but they did however personalize the look of the calipers.

From this angle you can clearly see how much wider the rear has become. The entire rear bumper has been redesigned with an integrated diffuser that houses the tailpipes in stainless steel.

The interior can be made to the specific demands of the buyer. This demo vehicle featured white and black leather with green stitching and accents. The center console always reminds of those expensive Vertu mobile phones.

The other star on the Techart stand was this GTstreet R that is based on the Porsche 911 GT2. This year they brought a matte white version that worked wonders with the exposed carbon bits.

Wheels were again the Techart Formula III that are powder coated black with an orange stripe. Behind them are orange painted calipers with a Techart logo.

The front of the car looks very aggressive with it's new front bumper and special bonnet that has been extensively tested inside the wind tunnel. Techart made sure the owner doesn't need to worry about the carbon front splitter because they have a system installed that can lift the nose by the flick of a switch.

The rear fenders have these air inlets made from carbon fiber that directs air directly to the engine bay.

More carbon can be found at the rear with these outlets for the intercooler and the diffusor.

These airducts provide cool air for the engine that has been extensively modified. This version has two revised turbochargers, new intercoolers and redesigned manifolds. Together with a valve controlled exhaust system and sports air filter this results in 700bhp and 860Nm.

The car has been tested by Formula 1 driver Adrian Sutil and he achieved a top speed of 339km/h.

This has to be the best angle to photograph the car. It also shows the height adjustable spoiler with carbon fiber supports.

A quick peek inside the interior revealed more orange accents and a carbon console.

After having driven the first generation of the Techart Magnum I was looking forward to seeing the second generation. I still love this car although I will probably be flamed for saying that. This car is huge and it's only purpose is to show off I guess.

I'll leave you with this parting shot of the rear of the car. I'll quickly get started with part three of my show coverage. 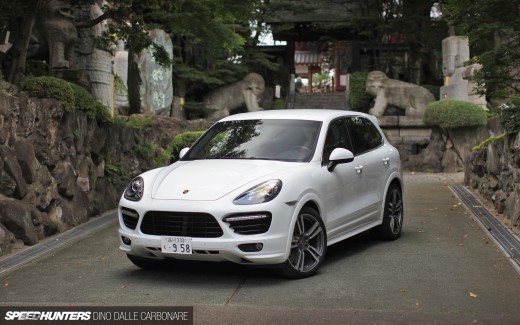 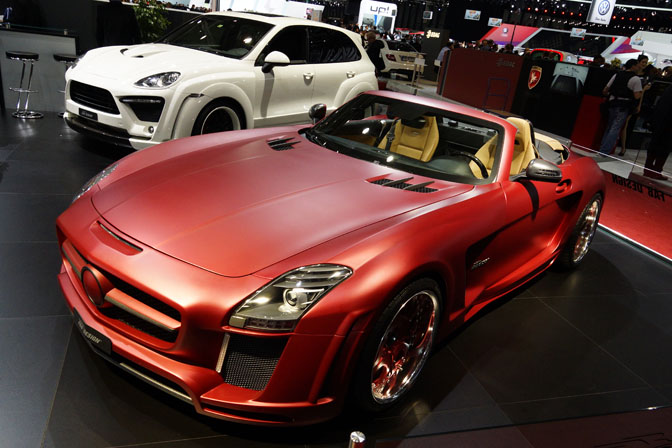 The Rear Light´s design of the Techart Cayenne looks like it´s been copied from BMW:

techart does a good job

Very nice photos!! I love what Techart has done to these Porches.

I loved that Magnum and Grand GT.. A couple of awesome cars!

I guess the Magnum IS okay because when you first buy a cayenne you know you'll get noticed.

But that Panamera, it's just a car for bored UAE princes. 'Mean seriously, what normally constituted man would buy a Panamera and then think "i don't like the front , it's need that new grille I saw the other day at the Paris motorshow on the new quattro concept, and I don't like to have an electric rear spoiler, instead i want a huge one that brake the overall line of the car and also blind the central rear view mirror and most importantly I want an interior like Ken Block!"

Come on if you'd personalize a Panamera spend most of the cash on the go (engine-suspension-light alloys-chassis...) and the rest on subtle cosmetic changes hinting to the trained eye you've got a special Panam'

Last, I wonder how much faster is that GTStreetRS (more Rs, Ss and Ts in the name please there're still not enough yet!) than a "stock" GT2RS...In the past i 've read article pointing out that even though techart GTstreet hag huge acceleration and top speed it had lost most of the original car composure and handling abilities...

anyway that's my point of view and i do not one has to agree with it...

first is mad money, second is pretty meh and wtf happened to the third.

That Panamera looks great... except for that nose job.

You know, I'm really surprised that nobodies chopped the Panamera into a new 928, yet. I mean, that IS what the Panamera was originally supposed to be before some imbecile at Porsche got they're dirty grubs on the design and thaught it would be a great idea to take (what would be a solid) sports car and turn it into a mamby luxury/family sedan (because Porsche is obviouly known for their luxury ;] ). Anyways... I'm still waiting for a new 928...

absolutely gorgeous. i didn't even think a pnanmera could look good...

They have actually managed to make a Panamera look good! I'm impressed.

Porsche Panamera and Cayenne both remain ugly no matter what design studio gets their hands on them. The 911 isn't bad, though.

loving the Grand GT from all angles.. like the RS's orange signatures too - the front of the 'Magnum' is so overly fussy but the rear is just right!

Before I start with my final report on the IAA, I wanted to take a small detour and show you some of

A couple of weeks ago I got an email from Rod, telling me that he was planning to join me during the